On this day: One of Ireland’s favorite poets, Patrick Kavanagh, was born

How Irish poet Patrick Kavanagh and The Dubliner's frontman Luke Kelly came together for the famous Dublin ballad On Raglan Road. 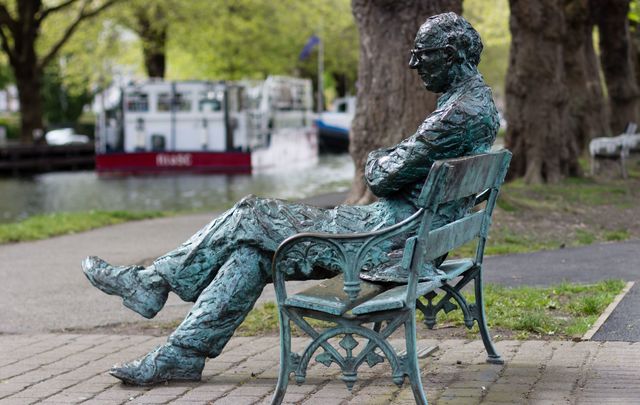 A statue of Patrick Kavanagh on the banks of the Grand Canal, in Dublin. Peierls / Creative Commons

On this day, in 1904, Patrick Kavanagh was born in Dublin. Today we remember how Patrick Kavanagh and The Dubliners frontman Luke Kelly came together to create one of Ireland's most beloved ballads, 'On Raglan Road.'

It’s Bailey Pub, Dublin. The year is 1966. The place is packed with people sitting at the bar and at small tables. Loud raucous banter, laughter and the slow drone of conversations fill the air. A thick fog of pipe and cigarette smoke merges with low electric lighting to create a muggy, stifling atmosphere.

Luke Kelly, the lead singer of The Dubliners, has just finished his set and returns to his table. Appreciative nods, compliments, and pats on the back follow him through the crowd. He needs some refreshment, and his friends have kindly procured for him: two pints of porter and a shot of whiskey. He takes a substantial gulp out of his wide-rimmed pint and turns his head as a hand is gently placed on his shoulder. He looks up to see the poet, Patrick Kavanagh, a man Kelly knows well from the pub and literary scene. They greet each other and Kavanagh takes a seat.

Slightly disheveled and maudlin, Kavanagh compliments Kelly on his set, and then, he surprises him by asking him if he will sing one of his famous poems, ‘Raglan Road’. He asks Kelly if he thinks that he can adapt it as a song?

Kelly knows it well. And, he knows what it’s about - Kavanagh’s unrequited love for a beautiful young woman. He’s heard rumors.

He says that he’ll give it a go.

... Well, that’s more or less what happened, via my imaginings of how "Raglan Road" came to be sung.

Patrick Kavanagh met beautiful, dark-haired Hilda Moriarty in 1944. Originally from Dingle, she was only in Dublin a few months, when she became one of the most celebrated beauties of time. She was a trainee doctor; she was also a fan of poetry and literature, which is how they met.

Unfortunately, there was too much of an age gap, she was twenty-two and he was forty, so she ended the relationship and married a younger man soon after.

In 1946, "Raglan Road" was published under the name, "Dark Haired Miriam Ran Away."

But everyone who knew Kavanagh knew that it was about Hilda.

Luke Kelly couldn’t have interpreted it better. He chose 17th-century air "Fáinne Geal an Lae" (‘Dawning of Day’), as the basis of the song. The accompaniment by The Dubliners never overpowers poetry, with gentle strumming banjo-infused with small flourishes of guitar and tin whistle.

Either through empathy for Kavanagh’s (still evidently resonant) plight, or from respect for the poem as a brilliant literary work, Luke Kelly immortalized it; his powerful tenor voice reciting it poignantly, and with great dignity. I attach a link below to a live performance and a recorded version. Though not perfect, I tend to prefer live performances, because they catch the moment.

On Raglan Road on an autumn day, I met her first and knew.

That her dark hair would weave a snare that I might one day rue;
I saw the danger, yet I walked along the enchanted way.
And I said, let grief be a fallen leaf at the dawning of the day.

Do you have a favorite piece from Irish poet Patrick Kavanagh? Share in the comments.

How many castles are there in Ireland?