This historic newsreel shows when more than half a million people came out to mourn the death of Michael Collins in Dublin in August 1922. 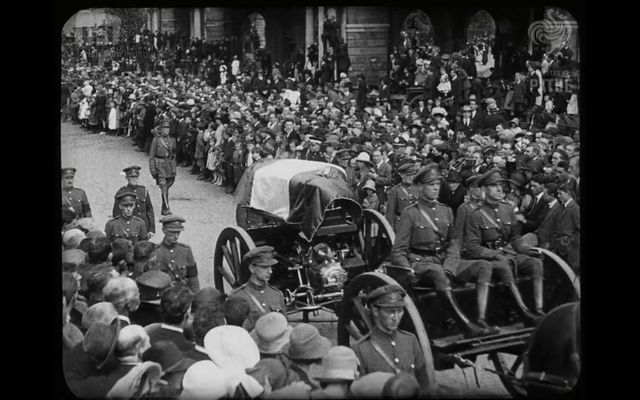 "More than Half a Million Mourners" is now available on the IFI Archive Player. Irish Film Institute

"More than Half a Million Mourners" is now available to stream for free on the Irish Film Institute's IFI Archive Player.

In this August 1922 newsreel, Michael Collins is lying in repose in City Hall in Dublin. Thousands of people line the streets outside to wait their turn to pay their respects. The Royal Irish Constabulary officers are working hard to try and hold back the crowds outside the Pro-Cathedral on Marlborough street.

Michael Collins was an Irish revolutionary, soldier, and politician who was a leading figure in the early 20th-century Irish struggle for independence. He was Chairman of the Provisional Government of the Irish Free State from January 1922. He was assassinated on August 22, 1922 in Cork.

This film is part of the IFI's Irish Independence Film Collection.

The period 1900-1930 was one of the most turbulent in Irish history, with WW1, the Easter Rising, the War of Independence, the Irish Civil War all taking place. Due to the emergence of cine camera technology in the 1890s, these three decades are the first to be widely documented on film.

However, Ireland’s lack of indigenous filmmaking during the early part of the last century means the moving image record of this pivotal period in history was predominantly captured by non-Irish agencies. Newsreels of Irish events were screened alongside their home-grown stories in cinemas. In the early part of the 20th century (before the advent of television) newsreels, radio and newspapers were the predominant way for the public to keep up to date with important events.

Until recently, these Irish newsreel stories, filmed by British agencies, had not been held in an Irish Archive and many had not been available to the public since their initial distribution 100 years ago. The Decade of Commemorations presented the Irish Film Institute with a unique opportunity to create The Irish Independence Film Collection, comprising Topical budget and British Pathé newsreels, with support from the Dept of Culture Heritage and the Gaeltacht. As part of this project, the IFI was able to repatriate, safeguard and share these important visual documents – centralising them in Ireland for the first time and making them available to the Irish public.

It was essential the IFI Irish Film Archive repatriated the best quality copy of this remarkable material, which so vividly details the political, social and cultural events that shaped the Irish State. Thus, the IFI worked closely with the custodians of these collections (the British Film Institute and British Pathé) to ensure the best preservation outcome for this material. Acutely aware of the age and fragility of these newsreels, the IFI persuaded both organisations to go back to the original nitrate film prints and meticulously digitise them to HD Quality. The quality of the newly digitised footage is remarkable, allowing even those who may be familiar with this material to see it in a whole new light. Details which were previously indistinct are now crystal clear.

In order to add further value to the collection, the IFI enlisted assistance from National Museum of Ireland and University College Cork. Their staff helped to curate and catalogue the content and ensure that the information presented is as accurate as possible with important events, people and locations which were originally missed by non-Irish cataloguers. As part of the national centenary celebrations, the Irish Film Institute has created a project that not only celebrates this momentous period in our history but that also has lasting value for the Irish public.

"More than Half a Million Mourners" is published here with thanks to the Irish Film Institute (IFI), who IrishCentral has partnered up with throughout 2022 to bring you a taste of what their remarkable collection entails. You can find all IrishCentral articles and videos from the IFI here.