The mass card used in Michael Collins's funeral in 1922

A grand-nephew of Michael Collins shares the mass card used during the Irish revolutionary hero's funeral on August 28, 1922. 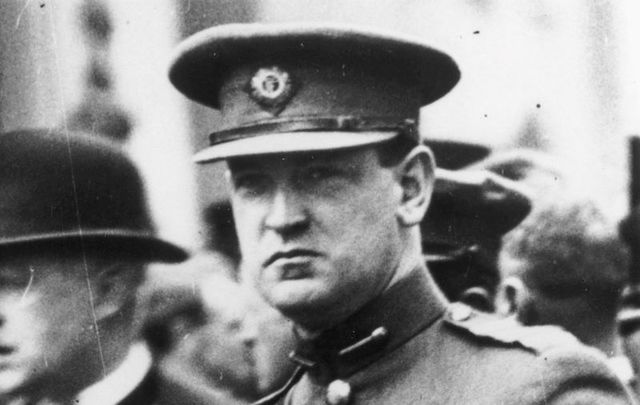 Michael Collins, pictured here only a week before his death in August 1922 Getty Images

On August 28, 1922, the funeral for Michael Collins was held in Dublin. A century later, the revolutionary's relative has shared the mass card used that day.

A relative of Michael Collins has shared an image of the mass card from the Irish revolutionary hero's 1922 funeral.

In 2016, as the centenary of the Easter Rising was being commemorated in Ireland, Michael Collins's grand-nephew Declan McGuill shared images of the mass card that was used in Collins's funeral.

“Their son – and the only child surviving to adulthood – was our Dad, Sean McGuill (also of Dundalk). Michael Collins is, therefore, our great uncle."

“My mother informs me that the memorial card we have would really only have been given to family (and perhaps extended family) members so it obviously holds a very special place in our family’s archives.”

Who is Michael Collins?

The British sent Collins to a prison camp in Frongoch in Wales for his role in the 1916 Easter Rising, which McGuill and his relatives planned to visit to commemorate their hero ancestor.

Collins emerged out of Frongoch as one of the new leaders of the independence movement. He became Director of Intelligence for the Irish Republican Army during the War of Independence and organized a special assassination unit called The Squad expressly to kill British agents and informers.

When talks to end the War of Independence were arranged for October 1921, Michael Collins was one of the delegates who traveled to England to negotiate with the British government. A truce had been established in July 1921 to allow the two sides to meet for the talks that eventually led to the Anglo-Irish Treaty, which saw the establishment of the “Irish Free State” and the partition of Ireland into North and South.

A prominent advocate for the Anglo-Irish Treaty, Collins was one of the main political figures on the Pro-Treaty side of the Irish Civil War that followed the Treaty’s implementation.

Unfortunately, Collins was killed in an ambush in August 1922. His death came in his native Cork, at the hands of those who had fought alongside him in the War of Independence.

Traveling in a convoy through Béal na mBláth, Co. Cork, Collins was convinced that “they won’t shoot me in my own county.” The convoy was ambushed by anti-Treaty forces, however, and Collins received a single gunshot wound to the head that killed him instantly.

He is believed to have been shot by fellow Corkman Dennis “Sonny” O’Neill, a former member of the Royal Irish Constabulary who had fought for the British Army during World War I. O’Neill joined the IRA in 1918 and joined the anti-Treaty side during the Civil War.

Thousands of people lined Sackville St (modern-day O’Connell St) in Dublin’s city center for Collins’ funeral in August 1922 to pay tribute to “The Big Fellow,” a hero in the fight for Irish independence and a man who worked hard for the benefit of Ireland in the establishment of the Irish Free State.

Some 500,000 people, almost a fifth of the population of the country at the time, gathered for his funeral ceremony in Dublin’s Pro Cathedral.