Instead of replacing the painting of Fine Gael icon Michael Collins in his taoiseach’s office, Micheál Martin said he would retain him as well as Fianna Fáil founder Eamon de Valera. 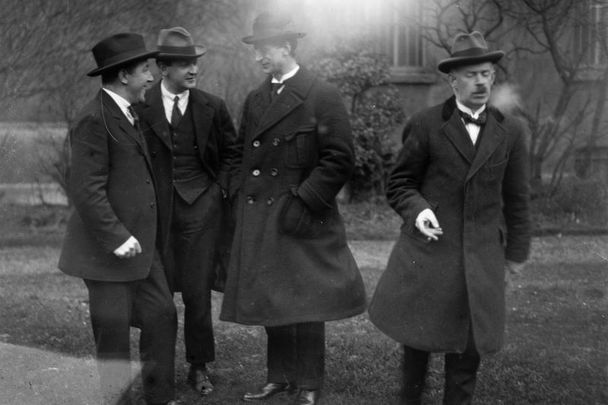 THE two men who dominated modern Irish history and changed Ireland forever because of their enmity are together again.

Newly-elected Irish Taoiseach Micheal Martin, the leader of Fianna Fail, made a surprising announcement on his first day.

Instead of replacing the painting of Fine Gael icon Michael Collins in his taoiseach’s office, he said he would retain him as well as Fianna Fáil founder Eamon de Valera.

The two portraits symbolized the historic coming together in a shared government of the two ancient enemies who had dominated the foundation of the Irish state.

As a youngster, I learned that your politics were immediately recognizable when you stated your preference for one or the other.

My father was a de Valera man, proud and true. My mother, Collins.

Their seven kids often hotly debated the issue, especially who was on the right side when the infamous 1921 Treaty divided Ireland.  I used to think de Valera, but no more.

As far as the public goes, Collins has fared far better as the years have gone by.  He was an impossibly young 30-year-old leading the IRA against the might of the British Army during the War of Independence from 1919 to 1921 and, incredibly, fighting them to a stalemate.

Read more: 100 years ago De Valera arrives in US as a hero but splits Irish America

We will never know what kind of leader Collins might have been because he was tragically assassinated returning from a military tour in his native Cork by killers unknown at Beal na mBlath (the Mouth of the Flower), a place of pilgrimage for thousands every year since.  That was during the Irish Civil War in 1922 to 1923.

The arguments started before the body was cold, and the split that led to de Valera founding Fianna Fail in 1926, in opposition to Collins and Fine Gael, is one that lasted down all the years to last weekend.

De Valera ruled Ireland for 16 years as taoiseach, and then for 14 years in the less politically powerful role of president.

Throughout it all, in or out of office, de Valera was the most important man in Ireland yet somehow, as quoted in the Coogan biography, he feared Collins would leave the larger legacy.

And indeed he has.  A major Hollywood movie with Liam Neeson as Collins certainly helped with recognition, but it was the human side that ordinary people loved.

The love letters between himself and his fiancee Kitty Kiernan continue to be a subject of huge fascination to many, as are the widespread retellings of his extraordinary operations when fighting the British.

As time has flowed on de Valera seems more gray, bending the knee to the church, keeping outmoded economic policies for too long that led to mass migration.  He has become a remote, austere figure, better suited to a plinth than a photograph.

Collins we see in full flight still -- a lover, a soldier and a revolutionary. Both their portraits now hang in the new taoiseach’s office, but it is easy to see who dominates.

Read more: Michael Collins gets revenge 100 years ago in Wexford