On December 8, 1980, John Lennon was shot by Mark David Chapman as he returned to his New York apartment. 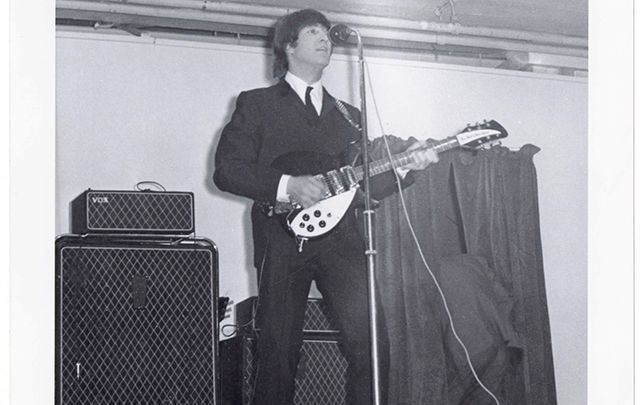 Editor’s note: Although three-quarters of The Beatles line up had Irish roots, throughout the years of Beatlemania, John Lennon knew little of his connection to Ireland, other than the DNA link inherited through his estranged father and the family he never knew. It was in the post-Beatles days, however, that Lennon (or Ó Leannáin as we should call him) became one of the most famous voices calling for a United Ireland and for an end to English presence in Northern Ireland.

Today, we sadly remembered the 40th anniversary of Lennon’s death but what better time to celebrate the Irish links this icon had: His shamrock green-laced family tree, his full, unadulterated support for a United Ireland, and his attempts to protest against the Troubles violence through his solo music, all while striving to reconnect with the land his family emigrated from through the island he owned off the coast of Co. Mayo, the island on which he had hoped to spend the last of his days in perfect peace and beauty.

In the article below, Ray O’Hanlon, Editor of the Irish Echo, remembers working on the breaking story of Lennon’s death for the Irish Press:

John Lennon, me, and the byline that wasn’t

It was still dark outside when I walked into the brightly lit newsroom.

By the first week in December, the Irish winter has well closed in.

It was 7 am and might as well have been midnight.

There was only a handful of people in the large space that served as a beating heart of the Irish Press and Evening Press newspapers.

I was the first reporter on that morning, there to cover a shift known as “Daytown.”

This entailed phoning Garda stations around Ireland to find out if anything untoward had happened while the country slept.

Calls, using a pre-programmed push-button console, would also be made to the main fire headquarters in Dublin, and the Marine Rescue Coordination Center in Shannon.

This passed for high-tech at the time.

The Daytown reporter would also be required to read the death notices in the Dublin morning papers, Press, Times, and Independent, to see if some fortunate had departed this earth as a result of some accident or misadventure.

Daytown was a busy shift, especially in the three and a half hours before the first edition of the Evening Press, the “Country Edition” as it was known.

I steeled myself for what lay ahead and then noticed that Dermot was at his desk.

This would have been Dermot McIntyre, something of a legend in Dublin newspapering for his hard-driving way of going at a story, or at least in directing a reporter covering a story.

He was in earlier than usual. Not a lot earlier. But earlier.

Still, I was on Daytown, so I would be left alone.

That was Dermot’s traditional greeting.

I could feel the adrenaline beginning to pump.

I was only a month on the job with one of the country’s main national newspapers.

It didn’t take much to feel that very particular newsroom jolt.

It was December 8, 1980. The Feast of the Immaculate Conception. The day that country folk came to Dublin to do their Christmas shopping.

The day that John Lennon died.

Some news editors would have come up with a couple of numbers but Dermot was inclined to let cub reporters sink or swim.

He was right, of course. In the longer-term sense.

But this was a short-term situation, big time.

Be that as it may I got to work. Luckily, I had a friend living in Manhattan and I had her number. I called, she answered. Then she woke up.

I didn’t have to even ask. She was on her way uptown to the Dakota Building. My story was going to have an on-site eye witness in it.

But I needed more.

I can’t quite remember how it transpired but somehow, likely with the use of sympathetic phone company operators, I managed get a number for the precinct station house (the 20th Precinct) where the suspected shooter was being held.

So I called it. On a rotary dial phone no less.

And the call was picked up by a real live New York cop.

I was on a roll now.

After introducing myself I asked - I had always been a Kojak fan and imagined I was speaking to Stavros – what was happening.

So he told me exactly what was going on, and that included the fact that the suspect was being held in the room right next to him.

What was the guy’s name?

Now the transatlantic phone connection wasn’t great. There was a lot of background noise, not surprisingly, in the precinct house, so getting the name took a minute.

Read more: Rare footage of When The Beatles came to Dublin in 1963

Eventually, I had it written down. Mark David Chapman.

Then my new best friend at the other end of the line threw a curveball.

Kind of rhymed with Charlie Chaplin, he said, trying to be helpful.

But we worked it out. I got some more detail, reckoned I had seen so many New York cop shows that I could virtually describe the color of the walls and the posters hanging on them, and thanked the officer profusely.

I had the top to a story that, naturally, would be filled out by wire copy.

And my New York friend had come back with tales of people gathering outside the Dakota, candles, tears, the singing John Lennon songs.

And with all of these things it would be my byline atop the front page splash for that day’s Evening Press, all four editions, because there couldn’t be a bigger story than this one.

And it would be a big splash because the paper was still a broadsheet at that point in time.

I was certain we had beaten our rival across the River Liffey, the Evening Herald, in terms of getting as close to the heart of the story at that early point in the day.

But Dermot, too, had been busy.

He hadn’t left anything to chance.

As I was beavering away he had himself called New York.

Turns out the Press had a stringer in Manhattan.

His name was Peter Fearon and he worked for the New York Post.

And it was to be Peter’s byline that would one of the biggest stories of the year when the printing presses began to roll.

But I also realized the fact that I was just part of a bigger thing, and it was the bigger thing that ultimately counted.

There was room in a good newsroom for lots of things, but egos were best left at the door.

And apart from that, Peter Fearon’s byline was especially appropriate. He was from Liverpool. So he was the only man to pen the words for what was a truly tragic tale.

So I contented myself with having nailed down a good story even if was never destined to see the light of a day that had now, finally, dawned.

And there was something else.

Dermot complimented me on my fruitless effort. Now that was a rarity.

I left work later that day feeling that I had won a Pulitzer.

You can read more about John Lennon and his links to Ireland here.

What do you remember of the day John Lennon died? Could he have been the most famous name to voice his support for Irish freedom? Tell us your memories of The Beatle in the comments section, below.

* Originally published in the Irish Echo, in 2017.