Mary Pinchot Meyer and John F. Kennedy were one of the most talked about rumored affairs of the Camelot era that ended in the tragic death of Meyer in an execution-style shooting. 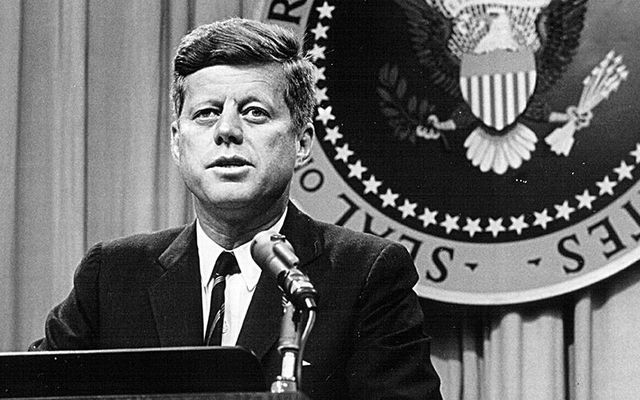 Mary Pinchot Meyer and John F. Kennedy’s affair has led to a conspiracy theory that her death was part of a massive Camelot-era cover-up.

Conspiracy theories follow the Kennedy political dynasty wherever they go and no one member of the family has worked up as many alternative theories among fans and foes as John F. Kennedy. In particular, his rumored mistress Mary Pinchot Meyer and her murder have driven people into a frenzy with alternate stories.

Mary Pinchot Meyer and John F. Kennedy are believed to have struck up an affair in the early 1960s.  Among all the rumored JFK mistresses, it is Pinchot Meyer and, especially her the untimely death, that can whip those conspiracy theorists into a whirlwind of rumors that she was perhaps in too deeply with the 35th President.

Artist and socialite Pinchot Meyer was murdered in an execution-style shooting on a street in the Washington neighborhood of Georgetown on October 12, 1964, two years after the death of another famed JFK-rumored mistress Marilyn Monroe. Ray Crump Jr was initially arrested for the murder of the 43-year-old but he was acquitted of the charge in July 1965 because of a lack of evidence.

Crump Jr is the only suspect ever identified in the investigation of  Pinchot Meyer’s brutal death, but the lack of evidence against Crump Jr. has led some people to believe that he is innocent of the charge and that it was, in fact, those who wished to protect John F. Kennedy, who was assassinated several months earlier, who were responsible for her death.

“She was shot in the head,” author Nina Burleigh, author of the 1999 Pinchot Meyer biography “A Very Private Woman”, told People magazine.

“Passersby heard screams and a witness looked over the wall and saw a man standing near her body. The police came and shortly arrested a black male [Ray Crump Jr.] soaking wet who said he fell into the Potomac while fishing. … No gun was ever found.”

Her biographer believes it was the arrested suspect

While Burleigh herself believes that Crump Jr. was responsible for killing the artist while she was out for an afternoon walk, she does acknowledge, however, that there are those who believe her death could be linked to her speculated affair with JFK.

“The theory is that she had to die because she knew too much,” Burleigh states.

“Her murder just ten days after the Warren Commission report was released makes a lot of people suspicious that she had to be silenced.

“She lived in a world of secrets … the secrets of spies running complicated international plots, trying to control a dangerous world at the dawn of the nuclear age.”

Mary Pinchot Meyer came from a wealthy family, as did JFK

Both from wealthy families, Mary Pinchot Meyer and John F. Kennedy met in prep school but their affair is believed to have started much later. The daughter of Amos Pinchot, a wealthy Progressive lawyer, and Ruth Pickering Pinchot, a writer and activist, Pinchot Meyer was raised on Park Avenue and went on to marry Cord Meyer, a high-ranking CIA official, in 1945. The pair divorced in 1958, shortly after the tragic death of the couple’s nine-year-old son in a car accident.

Thanks to her first marriage and her sister’s marriage to legendary Washington Post editor Ben Bradlee, a close confidant of JFK, Pinchot Meyer found herself in the Kennedy inner circle and certainly could have been in a position to strike up the rumored affair in 1961 or 1962.

“Her name first appears in the White House logs in October 1962,” Burleigh claims.

“Like everyone else, we had heard reports of presidential infidelity, but we were always able to say we knew of no evidence, none,” wrote her brother-in-law Ben Bradlee in his autobiography. Coming across her diary, however, is said to have his changed his mind as he believes that, although not mentioned, a man Pichot Meyer refers to could quite possibly have been JFK.

“It was clear that the lover had been the president of the United States, though his name was never mentioned,” Bradlee wrote. He added that he “was truly appalled by the realization of the extent of the deceit involved.”

Burleigh believes Mary Pinchot Meyer and John F. Kennedy to have had an “intellectual kinship”, making her different from the other mistresses the president may have had.

“It’s hard to say,” she states. “My research led me to believe Kennedy was a sex addict … and like the ‘Mad Men’ of the TV show. She was very upper class, and ahead of her time in terms of modern art, personal style, using marijuana and LSD — very much a precursor to the culture we associate with the 1960s.”

Could Mary Pinchot Meyer's diary have revealed her secret affair with JFK?

Bradlee also revealed in his memoir that he came across chief of CIA counterintelligence James Jesus Angleton breaking into Pinchot Meyer's artist studio on the night of her murder, which is the reason why he went looking for her his sister-in-law’s diary.

“In Bradlee’s memoir, he revealed that he caught CIA counterintelligence master James Angleton breaking into Mary’s studio the night of the murder and looking for her diary,” explained Burleigh.

“Bradlee found the diary looked at it.”

Burleigh is still unconvinced, however, believing the original suspect Crump Jr. to be responsible.

“The evidence against him was strong but circumstantial (no gun was ever found), but my investigation led me to believe Crump was entirely capable of violent behavior,” she previously wrote for the Daily Beast.

“His long post-acquittal record included stints in federal prison for repeat arsons and the rape of a 13-year-old.”