Hired months after the assassination of JFK, McKeon worked for Kennedy when RFK was killed and when she married Aristotle Onassis. 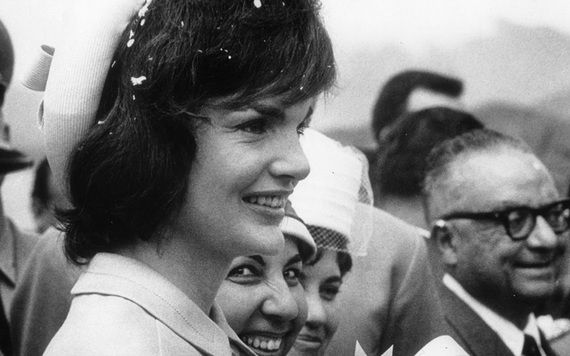 In 1964, Kathy McKeon was just nineteen years old and newly arrived from Ireland when she was hired as the personal assistant to former first lady Jackie Kennedy. The next thirteen years of her life were spent in Jackie's service, during which Kathy not only played a crucial role in raising young Caroline and John Jr. but also had a front-row seat to some of the twentieth century’s most significant events.

Because Kathy was always at Jackie’s side, Rose Kennedy deemed her “Jackie’s girl.” And although Kathy called Jackie “Madam,” she considered her employer more like a big sister who, in many ways, mentored her on how to be a lady.

Kathy was there during Jackie and Aristotle Onassis’s courtship and marriage and Robert Kennedy’s assassination, dutifully supporting Jackie and the children during these tumultuous times in history.

McKeon on her wedding day standing beside Jackie Kennedy.

“Will you talk to John and Caroline?” she asked, her voice a torn whisper. “Their uncle passed away.”

“I know,” she said bitterly. “Same story all over again.”

I found John and Caroline crying in John’s room.

“Your Uncle Bobby is up in heaven,” I tried to console them. “Let’s choose a dress for you to wear,” I suggested gently to Caroline.

She knew without asking that I meant for the funeral.

“It was a very sad day, it was a sad day for everybody,” McKeon told People's, Liz McNeil. Caroline and JFK Jr. “were very upset that Uncle Bobby was gone,” she said. “He was very, very good to them.”

Although she never called her employer anything other than ‘Madam’ she came to regard her as akin to a big sister.

As a witness to so many of the key moments of Kennedy’s life after the White House, McKeon provides details of her marriage to shipping magnate Aristotle Onassis, the aftermath of Robert Kennedy’s assassination and the childhoods of Caroline and John Jr.

After Kennedy’s engagement to Greek shipping magnate, Aristotle Onassis, she pondered, “Is this what she wants? I couldn’t help but wonder. She and Mr. Onassis seemed like friends, not a couple.”

Later she wrote, “It was hard to tell by Madam’s business-like demeanor whether she was happy.”

With the benefit of hindsight McKeon told People that on the day of the wedding,  “[She seemed] normal, happy-go-lucky, just good. She didn’t say anything. The hairdresser was there. She did her hair and then I helped her get dressed. She did her own makeup.”

As for the wedding itself, “[Jackie wore] a long evening gown,” McKeon recalled. “It was pretty plain. I think it was yellow with beads around the neck like a shift dress [with] two slits at the bottom. Kind of one you would wear around the house — very cozy and comfortable like.”

But life for the new Mrs. Onassis didn’t change much once married - except for one crucial detail.

“[Jackie] would come in very late for dinner and the cooks and the waitress would get grumpy,” she said. “Sometimes 10 o’clock. The cooks, they were getting too old for that.”

Jackie watched her diet very carefully. She would eat around 600 calories a day in a menu that consisted of a boiled egg for breakfast, cottage cheese and fruit for lunch and poached chicken and salad for dinner.

However, Kathy said that Jackie also had a sweet tooth.

She recalled: “If she went into the kitchen and saw my brownies or chocolate chip cookies she would grab one and eat it right there. Sometimes we’d crash into each other at night in the kitchen pantry.

“She didn’t put on the light because she didn’t want anyone to know she was in there!”

Kathy also insists that despite her demure appearance, Jackie had another mischievous side to her. She says: “She was a lot of fun.”

McKeon left Kennedy’s employment in 1974 and went on to have three children; now a grandmother, she lives in Florida.