As a young reporter, JFK did not think much of Ireland’s leader during the thorniest ever period of US-Irish relations. 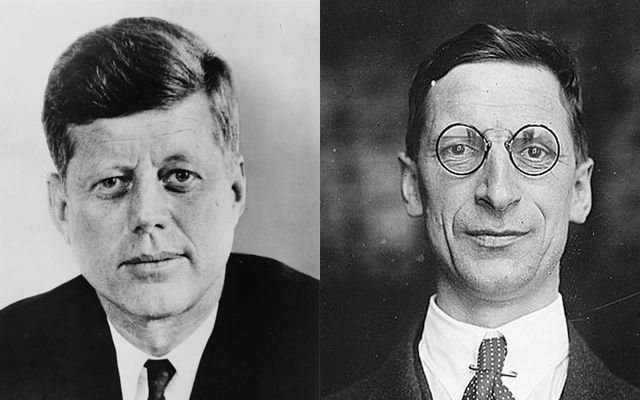 A young John F. Kennedy called the then-Taoiseach (Prime Minister) of Ireland Eamon de Valera a lunatic after visiting his ancestral home in Co. Wexford in 1945.

JFK had recently left the United States Navy after World War II and had gotten a job as a reporter with the newspaper, Hearst, thanks to his father’s extensive connections. The 28-year-old was sent on a “fact-finding” mission in a Europe that been liberated mere months beforehand.

The diary that he kept is now up for auction and reveals that JFK stayed with David Gray, who was then serving as the United States’ Envoy Extraordinary and Minister Plenipotentiary to Ireland (a de facto Ambassador). Gray was uncle to Eleanor Roosevelt by marriage and had frequently clashed with de Valera over his Government’s strict policy of neutrality during the war.

De Valera, for his part, cordially loathed FDR’s man in Dublin; he repeatedly lobbied the White House to remove Gray from his position and at one point he even compared him unfavorably to Hitler’s ambassador to Ireland.

Read more: What did a young John F Kennedy look like during World War II? (PHOTOS)

After controversially calling the German Embassy to express his condolences following the death of the Fuhrer, de Valera wrote, “During the whole of the war, Dr. Hempel’s conduct was irreproachable. He was always friendly and invariably correct - in marked contrast with Gray. I certainly was not going to add to [Hempel's] humiliation in the hour of defeat.”

Clearly, the end of the conflict had not made the relationship any warmer and JFK recorded in his diary, "Mr. Gray's opinion of de Valera was that he was sincere, incorruptible, also a paranoiac and a lunatic.

"His promise is that the partition of Ireland is indefensible. He kept strict neutrality even towards the simplest United States demand," he added.

JFK controversially continues, "Mr. Gray admits that Mr de Valera was not any more friendly to the Germans than he was to us. He does not think German submarines were aided from Ireland, at least with the knowledge of Mr de Valera, although there were many German sympathizers. [Gray] quoted the Cardinal in 1940 as having said 'he would take Germany as soon as England'.

"The Cardinal believes that Ireland was created by God - a single island and people - and partition is, therefore, an offense to God. Gray says the island was maintained by the British during the war - gasoline, shoes, and coal - all were British."

He adds that Gray believed Ireland’s brief but brutal Civil War in the 1920s was the result of de Valera’s “pride”.

Kennedy also weighs in on Ireland’s economy. Under the headline of ‘Finance’, he writes: "Many Irishmen feel that it is a great mistake to be so closely tied up with the sterling bloc.

"It is bondage, they claim. England has many weapons with which she could strangle Ireland - a tariff on beef, shutting off her credit, as well as the use of force.

"England so far has done remarkably in practicing self-restraint, but Gray believes that on its previous form, it will probably make some serious error in the future."

He also speculates that de Valera’s recovery of the three Irish ports originally kept under British authority as part of the 1921 Anglo-Irish Treaty was a major boost to the Fianna Fáil party going into the 1938 election.

"This has given de Valera ammunition, and has given some substance to his feeling that everything that has been gotten by Ireland from England has been given grudgingly and at the end of a long and bitter battle."

JFK later traveled on to Berlin where he wrote of the former Reich capital, "The stench - sickish and sweet from dead bodies - is overwhelming."

He also declared Hitler to be “the stuff of which legends are made" and thought that one day he “will emerge from the hatred that surrounds him now as one of the most significant figures who ever lived.”

The diary is set to be auctioned on April 26 at RR Auction's Gallery in Boston.