What did a young John F Kennedy look like during World War II? (PHOTOS) 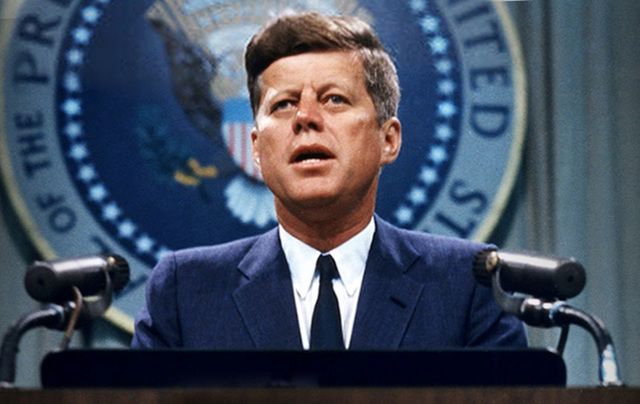 When people picture John F Kennedy they imagine him as President, handsome for sure, but also on the cusp of middle age.

So, what did he look like as a young man before all the certainties of the world were turned upside down by the Second World War?

Before he joined the US Navy JFK attended Harvard and the summer before his senior year he traveled across Europe to research his thesis on the Munich Agreement, Britain’s doomed peace treaty with Hitler in 1938.

Young JFK and his dog traveling in Europe in 1938.

His father Joseph Kennedy Sr was then the US Ambassador to Britain and Jack stopped by London before the trip back to Massachusetts. His brief stopover would allow him to witness one of the most seismic events in history when on September 1, 1939 Britain declared war on Germany following the Nazi invasion of Poland.

Kennedy’s position as Ambassador meant Jack and his sibling Joe Jr and Kathleen were allowed to watch a special sitting of the British Parliament, as a war weary and shocked nation braced itself for a second bloody, generation-defining conflict with Germany.

The war left few young families in America, Germany, Britain and countless other nations untouched and the Kennedys were no exception. Their huge wealth and privilege did not shield them from the tragedy of the conflict.

Joseph P. Kennedy Jr was two years older than Jack, and after his birth in 1915 his paternal grandfather had confidently predicted he would go on to become the first Catholic President of the United States. He studied at the London School of Economics and Harvard Law before enlisting in the navy. He was sent to Britain in 1943 and was killed in operations the following year when the bomber he was flying exploded. President Franklin D Roosevelt awarded him the Navy Cross posthumously. His father’s ambitions for a Kennedy political dynasty transferred to Jack.

Robert was only a boy of 13 when war broke out in Europe. Shortly before he turned 18 he too joined the Navy, although he was isolated from the action and complained once in a letter of feeling like a draft dodger.

John was originally turned away from the military on account of his bad back. His father wasn't having that – what would voters think of him if he sat out the conflict their relatives had been conscripted into? JFK spent a month doing back exercises and in 1941 he was finally commissioned an ensign.

His first job was in the Office of Naval Intelligence (ONI) where he was working when the Japanese bombed Pearl Harbor. However, his time in Washington was abruptly cut short when his superiors transferred him to South Carolina, possibly due to his romance with a Danish woman who was said to have friends in high-ranking Nazi circles.

JFK in the field during World War II

After officer training, Kennedy volunteered to serve on Patrol Torpedo (PT) boats and was assigned to the South Pacific. When his bad back flared up again, and he was denied the combat role he desperately craved, he complained he had been “shafted.” His fellow Naval recruits nicknamed him “shafty.”

Eventually Jack was given command of his own PT boat and was charged with patrols near New Georgia, just off the Solomon Islands. It was dangerous work and an attack by a Japanese destroyer left the boat damaged and two members of his crew dead. Turning to the ten surviving members of his team, Jack said to them, “There's nothing in the book about a situation like this. A lot of you men have families and some of you have children. What do you want to do? I have nothing to lose." The crew chose to fight on and swam the three miles to a nearby island where they were later rescued.

His heroism had not gone unnoticed, and his superiors promoted him to Lieutenant following the incident. Later, while recuperating in a hospital, he was awarded the Navy and Marine Corps Medal for his bravery and a Purple Heart for his back injury. Although he accepted the awards, Jack and his father felt he should have been awarded the Silver Star instead of the Navy and Marine Cross. The first is a combat medal, whilst the second is awarded for non-combatant incidents. Requests for an upgrade from both Kennedys were declined.

JFK recieves one of his two medals during World War II.

In 1950 and again in 1959 the Department of the Navy offered him a Bronze Star Medal, both times however, Kennedy turned them down.

Ultimately, he was honorably discharged from the Navy a few months before victory on grounds of physical disability with the rank of Lieutenant. His father could rest easy knowing that Jack had served bravely and could now look the families of veterans in the eye when asking for their votes.

In later years, when asked how he became a hero, Jack would joke, “It was easy. They cut my PT boat in half."