The glamourous Hollywood star’s career nearly came to an end after she controversially adopted an Irish baby in 1951. 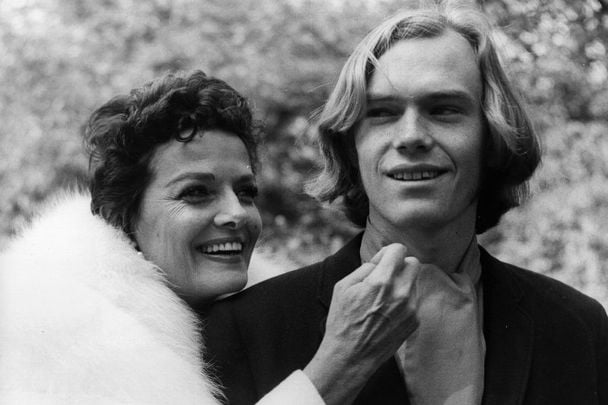 Jane Russell and her son Tommy during a visit to London, circa 1968. Getty Images

Russell had already adopted a girl with her husband, NFL quarterback and kicker Bob Waterfield, but wanted to expand their family, according to TheJournal.ie.

News of the star’s desire for another child reached Hannah McDermott, a Derry woman then living in London with her husband and young son. Reportedly Hannah offered her custody of baby Thomas on condition that Jane and Bob provided him with a good home, love, and education.

When the news made the papers, the controversy rippled across the world and young McDermott suddenly found her home in London besieged by photographers.

“And the adoption caused Jane Russell all sorts of grief. Howard Hughes thought all the bad press would finish her and he ordered her to return the boy, but she stood her ground and refused to give up the child.”

Baby Thomas was issued with a passport by Ireland’s London Embassy where staff were oblivious to the child’s true need for documentation. After the scandal broke, a Government memo circulated claiming that the entire incident was a “publicity stunt” by Russell and that one of the guarantors for the passport’s application had explicitly stated the baby was not being adopted.

And it was not just Irish civil servants who had had the wool pulled over their eyes. British legislation had come into force the year before banning such adoptions and Home Secretary (Justice Minister) Sir Maxwell Fyfe told Parliament nine days after the “adoption” that authorities believed the child was traveling to America for a three-month “holiday”.

Today, both Bob Waterfield and Jane Russell have passed away, and their son Thomas remains in the United States, reportedly living in Arizona.

He was one of thousands of Irish children adopted by American couples during the 1950s. Most of them, unlike Thomas, were born outside wedlock and state papers reveal that as many as ten a month were placed in US homes.

Back then, the Irish Government played little role in the practice, restricting themselves to issuing each child with a passport, trusting the Catholic Church’s vetting of prospective parents.

As most were born out of wedlock and living in homes, one Minister for Justice Gerald Boland wrote that he “favored the sending of children to America for adoption in suitable homes where the alternative would be life in an institution in this country”.

It was an attitude not uttered in public but one that quietly prevailed in the Irish Government, so much so that they did everything to facilitate such adoptions. One memo warning that it would be, “quite embarrassing if, in some case, a child had to be left in this country owing to the impossibility of issuing a passport in time”.

Disturbingly, Irish diplomats even wrote boastful memos back to Dublin that “Moreover, there is no ‘color’ problem here [in Ireland] so that intending foster parents in the US know that Irish children are ‘guaranteed’ in that respect.”

Subsequently, it’s been revealed that the vetting process in America was not as above-board as the Irish Government assumed. Monsignor O’Grady of the Catholic Charities admitted in 1956 that some the charity’s adoptions had been “irregular” and organized by a “commercial operator” in Texas and Wisconsin”.

The idea of an Irish child being bought and sold clearly rattled Ireland’s Department of External Affairs and in the wake of the Russell case a letter between London and Dublin was fired off stating, “I have taken an extreme case for my example but the fact is that, if any child who left this country for adoption in America figured in an unsavory press campaign, racket or other exposure, it is this Department that would face the music.”

Nevertheless, the practice continued right up until 1970. In 2013 a British film, "Philomena," was released starring Dame Judi Dench dramatizing the story of a mother who goes in search of her son in America some 60 years after his forced adoption in Ireland.