Evidence of an Iron Age temple complex at Navan Fort, one of Ireland's most prominent ancient sites and the mythical capital of Ulster. 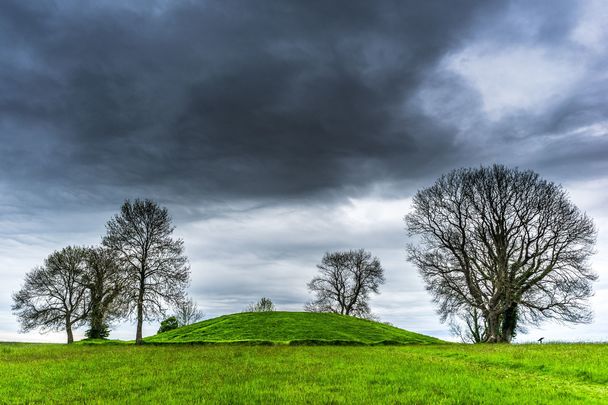 Archaeologists have found evidence that a vast temple complex existed in a famous prehistoric site in County Armagh.

The researchers have found evidence of a temple complex that dates back to the Iron Age at Navan Fort, outside Armagh City, one of Ireland's most prominent ancient sites and the mythical capital of Ulster.

The archaeologists from Queen's University Belfast, the University of Aberdeen, and the German Archaeological Insititute in Frankfurt used non-invasive remote sensing technology to explore Navan Fort, which is thought to be one of the five capitals on prehistoric Ireland.

In the 1960s, archaeologists excavated a huge series of prehistoric buildings dating back to the Iron Age in addition to a massive ringed structure made out of timber dating back to around 95 BC.

However, Dr. Patrick Gleeson, who lead the most recent studies at the site, said that the new research pointed to evidence of a huge temple-like complex at Navan Fort.

Gleeson told RTÉ News that the series of buildings uncovered in the 1960s were not simply dwellings lived in by kings and other prominent ancient figures, but actually a sprawling series of huge temples.

He said that the ritual arena was among the most complex and significant series of temples in prehistoric and pre-Norman Northern Europe.

Navan Fort is central to some of Ireland's most famous myths, according to Gleeson, including Táin Bó Cuailainge and the story of Cú Chulainn.

He said that the new discoveries were "quite significant" and that Navan Fort was "an incredibly important place" in Irish history and mythology.

Evidence of vast temple complex at Navan Fort in Armagh, Northern Ireland. A series of massive temples including a series of figure-of-eight buildings of the early Iron Age. Some of the largest and most complex in Northern Europe @papgleeson https://t.co/Dozd7U49RT pic.twitter.com/9jo6dxGOjH

Gleeson additionally said that the research found evidence that Navan Fort was not just used by the prehistoric Irish, and say that there is evidence that it was used in even the second millennium AD.

There is evidence of activity at the site long after the coming of Christianity to Ireland, according to the researchers, and some of the buildings bear a resemblance with a house built by King of Ulster Niall Óg Ó'Néill in 1387.

Researchers say that it is additionally significant that there is evidence of continued activity at the site after the foundation of Armagh, the eccleastical center of Ireland.