Irishwomen in service of humanity in India 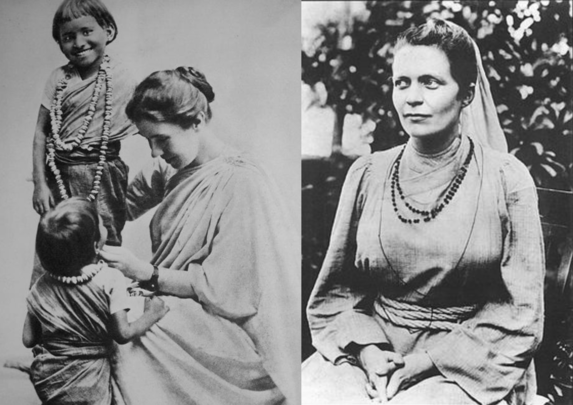 Two Irish daughters were among those who recognized the pain of India and dedicated a substantial portion of their lives to the welfare of the country. 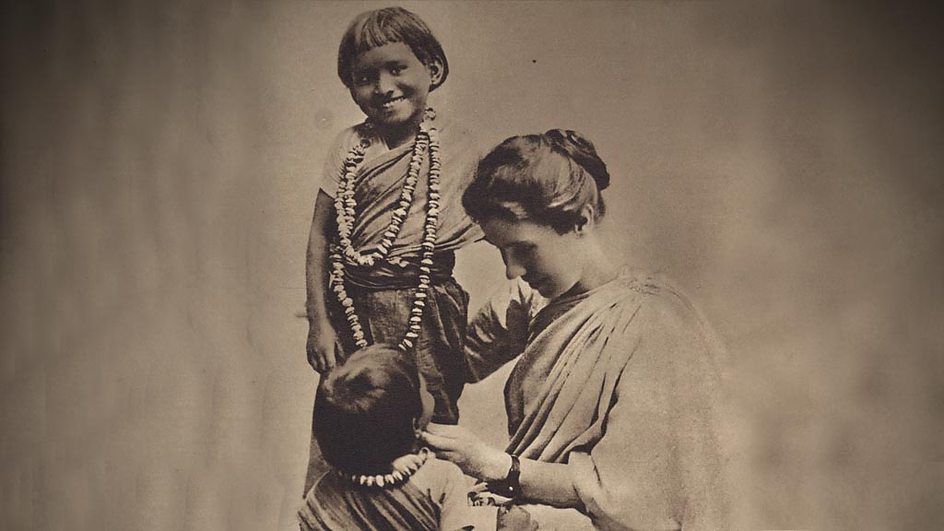 While Margaret was influenced by the teachings of the great Hindu philosopher Swami Vivekananda and adopted Hinduism, Amy put her trust in Jesus, and was a Christian.

These two Irishwomen understood this concept really well and went on to serve Indians with great determination and dedication. While Margaret was initially an Irish revolutionary both her male grandparents are said to have been active home-rulers, she went on to raise her voice for Indian independence, showing the unity of humankind against colonial oppression, her influence on the Indian National Movement from Independence from the British was phenomenal, Tagore knew and admired her, as did Ramsay MacDonald and Lady Minto. For many Europeans, she was the voice of radical India.

On the other hand, Amy was away from political questions what she worked on were social questions, such as protecting children from exploitation through the Devdasi system in Tamil Nadu, she brought the Christian light to this land, and became like a mother for several children of Tamil Nadu. Both these Irishwomen were not just propagating their faiths but were in fact doing service to humanity. 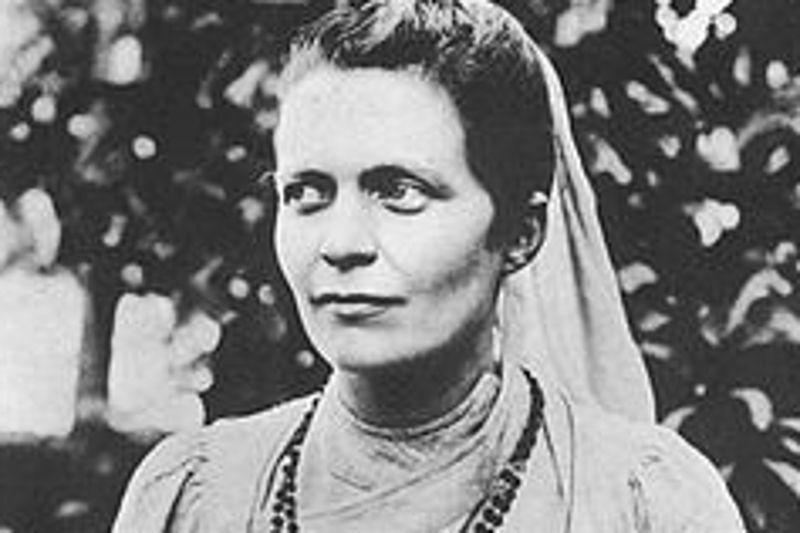 Sister or Bhagini in Hindi Nivedita's original name was Margaret Elizabeth Noble. She was born on October 28, 1867, in Dungannon County Tyrone, Ireland to Mary Isabel Hamilton and Samuel Richmond Noble. Her grandfather, John Noble, father, Samuel Richmond, and her maternal grandfather, Hamilton, were revolutionaries and prominent figures of the Irish freedom struggle. Therefore, she carried the legacy of revolutionary ideas. Her paternal grandfather was a minister of the Wesleyan Church in Northern Ireland but that did not become a bulwark in his way in fighting against the Church of England for the cause of his country’s freedom.

The Nobles had migrated to Ireland from Scotland in the fourteenth century. John married Margaret Elizabeth Nealus. But he died early when he was only thirty-five. Samuel Richmond was the fourth of their children and, somewhat against his will, engaged himself in business pursuits to help his mother. He married Mary Isabel Hamilton and their first child Margaret was born at Dungannon, County Tyrone on 28 October 1867. Even at the moment of her birth, it is authoritatively known, her mother dedicated her to the service of God.

She began her career as a teacher in Keswick in 1884 and, after spending time in Wrexham (1886) and Chester (1889), moved to London. Soon after her arrival in London she joined “Free Ireland”, an Irish revolutionary organization, spoke at its meetings, and organized cells in South England. Prince Peter Kropotkin, the world-famous author of Mutual Aid and ideologist of social revolution, was then in London and came to meet the organization. Margaret kept regular contact with him and obtained guidance on revolutionary work. Russia was then in ferment but Prince Kropotkin insisted that while taking lessons from the Russian experience, each country must work out its own path determined by its own conditions. Revolution must be brought about from within a country, it did not come from the blue. Margaret took these lessons seriously to heart.

Doctor Jadunath Sarkar, the doyen of Indian historians, among others, writes of the House of Sisters, the residence of Sisters Nivedita and Christine, where men, women, and children flocked practically at all hours of day and night. Leading lights of the day used to assemble there on Sunday mornings and many a plan for social and cultural work emerged from that rendezvous where high Government officials, public leaders, artists, and writers met and discussed matters of common interest. She established Ramakrishna Sarada Mission Sister Nivedita Girls School and took an active interest in promoting Indian historical research, cultural activities, and science for nation-building. During the plague epidemic in Calcutta, she tried her level best to nurse the poor patients and worked relentlessly for the improvement of the lives of Indian women of all castes.

She was a staunch supporter of the noble cause of independence of India, She spoke strongly in support of the resolution moved by the famous revolutionary, Anand Mohan Bose against the British government’s decision to divide Bengal in 1905 in her public meetings.

In 2016 to celebrate Indian Independence Day, a sculpture of Sister Nivedita, Margaret Noble, was unveiled at Ranfurly House. Chair of Mid Ulster District Council, Councillor Trevor Wilson said, “The unveiling of this sculpture forms a formal link between Sister Nivedita’s birthplace here in Dungannon and her workplace in Kolkata, India. ”

Miss Amy Wilson Carmichael was born on 16th December 1867 in Millisle, Northern Ireland. Amy’s parents were married somewhere around 1865. They both had the privilege of being raised in a Godly home. They were married in an Irish Presbyterian Church and were sincere Christians who taught Amy and her six siblings about the love of God.

In 1883, while at a girls' boarding school in Yorkshire, she put her trust in Jesus, during a special mission to explain Christianity to children. The Carmichael family moved to Belfast in the mid-1880s. Amy started a Sunday morning class for the shawlies (mill girls who wore shawls instead of hats).

These young women worked in poor conditions for 14 hours a day and received little pay. Amy brought them to the church services and as more girls came she decided to purchase a tin building to hold the large numbers. The Tin Tabernacle was purchased for £500, which amounts to £67 thousand in today's money. She called it the Welcome Hall and made it a meeting place for the shawlies. That hall became the Welcome Evangelical Church, which has become a thriving part of Christian Ministry in the Woodvale area of west Belfast.

She was the first missionary sent out by the Keswick Convention. After a few years in Japan, she came to Southern India and served for 56 years. She founded the Dohnavur Fellowship and remained there till her last breath, without ever returning to Ireland. She obeyed by laying down the evangelistic work that she loved, and that God had so blessed. She went on obeying, although at first, she had to face much opposition and danger, and many of the first babies she rescued died. As she learned more of the plight of innocent children, she was more affected by God’s own love and indignation, and she wrote words that inspired others to come and join her in Dohnavur, the tiny village tucked far away near the tip of South India, where the children had their home.

It was after being appointed to minister in the Tinnevelly District that Amy first became aware of the horrifying practice of dedicating little girls to a Hindu God or the Devadasi system. The practice, which had begun sometime around the 6th century, involved grooming girls, some of them only babies, for a life of ritualized prostitution. These girls were a valuable commodity since they would become the sex slaves of the Brahmin priests who ran the temples.

Since they were considered to be the property of the gods, the girls had no rights of their own and could be abused and tortured without censure. Amy was to meet Preena, a little girl whose widowed mother had given her to a Hindu temple, where she was ‘married to the god’. She was to become a temple prostitute. Preena tried to run from her plight, but as a punishment, her hands were branded with a red-hot poker. Eventually, she did escape and amazingly managed to get to Amy, who took her into her care.

When Amy or ‘Amma', which means Mother, understood this terrible trafficking of children in the name of Hinduism, she began to take in first girls, and then boys, filling a growing refuge for children. It was called Dohnavur. Amy rescued these children. After gaining a reputation for rescuing children, many escaped girls made their way to Dohnavur. But Amy did not just wait around for people to arrive on her doorstep. Whenever she heard about someone in danger, Amy would be proactive in doing all she could to rescue the child. She would sometimes travel incredibly long distances on India’s hot, dusty roads just to save one child she heard about. The Dohnavur Fellowship continues today, now supporting approximately 500 people on 400 acres with 16 nurseries and a hospital.

Religion, culture, politics, and society there are so many fields in which these two nations have inspired each other, in some cases Irish inspiring Indians and in others Indians inspiring Irish. It is now very important for our two nations and our two nationalities to come together and study our common past, learn about great people from our common past and tell about their greatness to posterity. Keep reading the author shall bring for all Irish around the world in coming times, more less known things about our commonalities as two great friendly nations.