The Indo-Irish Taoiseach is back - Exploring Ireland and India's connections

IrishCentral Contributor Arunansh B. Goswami looks at Taoiseach Leo Varadkar's Indian roots and the longstanding connections between Ireland and India. 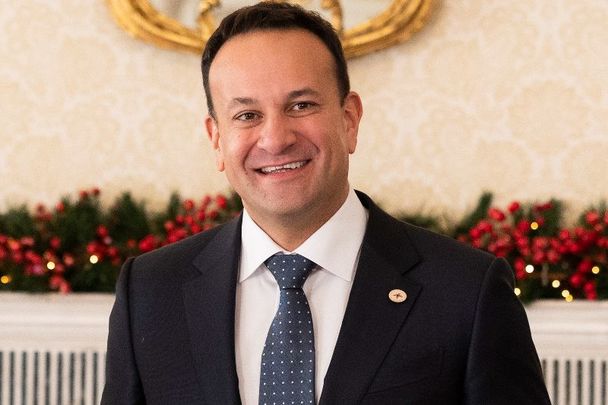 December 17, 2022: Taoiseach Leo Varadkar TD at Aras an Uachtarain getting his seal of office from President Micahel D Higgins. RollingNews.ie

On December 17, Leo Varadkar, whose father is from Mumbai, India and whose mother is from Co Waterford, replaced Micheál Martin as Taoiseach (premier) in a rotation between his Fine Gael and Martin's Fianna Fáil parties. The event was unprecedented in Irish history.

Leo’s father Ashok Varadkar’s ancestors hail from a village called Varad in Malvan in the Sindhudurg district in the state of Maharashtra in India. Leo called his ancestral village of Konkan as "place of my grandfather's."

Located on the western coast of India, this region has had a long history of conflict between different nationalities from the colonial powers such as Portuguese, French, Dutch, and British to the native Maratha Empire.

India’s Brian Boru, the famous Indian King Chatrapati Shivaji Maharaja, who is considered their most popular King by the Marathis, the ethnicity of Varadkar's father, surveyed the coast, and having fixed on Malvan as the best protection for his vessels and the likeliest place for a stronghold, he built forts there somewhat like Guy Maunsell built the Maunsell Sea Forts located offshore on the Thames estuary.

Like Irish King Brian Boru of the Dál Cais clan is remembered for the substantial unification of Ireland that happened due to his efforts and defending Ireland from Norseman, similarly, the Indian King Chatrapati Shivaji Maharaja of the Bhonsle clan is remembered for his efforts to unify India and fight against the Turkish Kings who had established their hold in different parts of India, primarily the Ottoman Adil Shah of Bijapur and the Turko-Mongol Mughals of Delhi.

The Irish and Indian struggle for independence should plausibly be an inspiration to the new Indo-Irish Taoiseach. 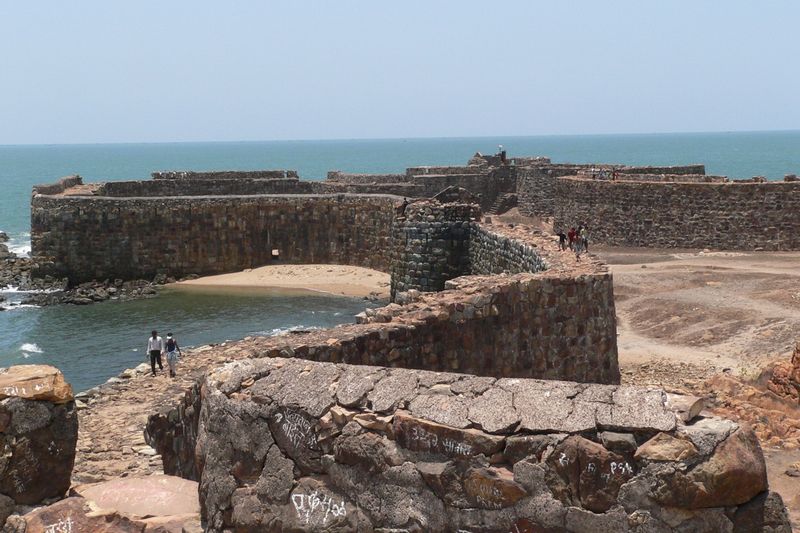 West side of fort showing a small beach and a door in the wall for beach access. (Public Domain)

India’s Brian Boru, Chatrapati Shivaji Maharaja, rebuilt and strengthened forts like Suvarndurg, Ratnagiri, Jaygad, Anjanvel, Vijaydurg which is the oldest fort on the Sindhudurg coast, and Kolaba, and prepared vessels at all these places.

Ireland's new Taoiseach comes from a district in India that gets its name from an important sea fort commissioned by Chatrapati Shivaji Maharaja called Sindhudurg which was built using money from the Surat campaign of Shivaji, where an Irishman Gerald Aungier was the head of the English factory. This Irishman laid the foundation of modern Bombay where Taoiseach Leo Varadkar’s father Ashok was born. 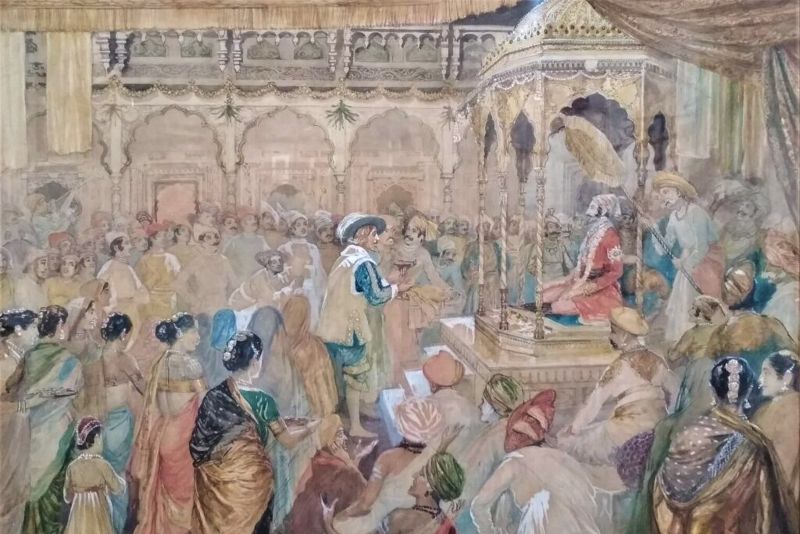 The Coronation Durbar with over 100 characters depicted in attendance. (M.V. Dhurandhar / Public Domain)

Chatrapati Shivaji Maharaja got 70,000 kilos of iron used for casting Sindhudurg fort’s foundation. Sindhudurg is spread over 48 acres with fortified walls, 29 ft high and 12 ft thick, that stretch for two miles. As many as 52 bastions with embrasures for cannons guard its walls. Some bastions have secret exits that lead out of the fort.

With almost 100 architects and a manpower of 3000, it took three years to build Sindhudurg. The fort houses a temple dedicated to Chatrapati Shivaji. Built by his son Rajaram, this is the only shrine of its kind in the country. The fort also has the hand and feet imprints of Chatrapati Shivaji on one of its walls.

In 2019, Leo Varadkar (meaning 'hailing from Varad') visited his ancestral village Varad in Sindhudurg. As per Dipti-Bhonsle Varadkar, a close relative of the present Taoiseach, the Varad family made “a classical Malvani feast” for Leo which included pomfret cooked in Malvani style, the Konkani chicken rassa, with rice, chapatis, local mango pickles, and dry chutneys.

To quote the Taoiseach about his Sindhudurg visit: “I am here with my parents, my sisters and their husbands, my partner and some grandchildren are here...so it is a big family visit."

He added that it was a "special moment" for him and his family and that he "would like to visit again."

Varadkar also visited the Temple of his family deity when he visited Varad. Deepti also said that there was some sweet surprise for the Taoiseach too - 'modaka' usually prepared during the annual Ganeshotsav festival, plus home-made 'gulab-jamuns', all whipped up by the village women-folk under the close supervision of another clan member Anuradha Varadkar, were prepared for the Taoiseach. The villagers of Varad were visibly very happy to welcome their village boy back. 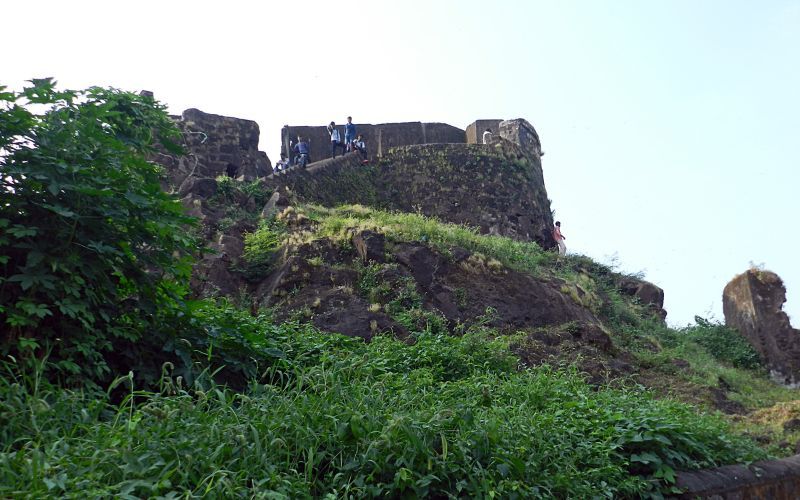 Leo’s father Ashok Varadkar was born in Bombay, now Mumbai, capital of the state of Maharashtra in India, which has a deep Irish connection.

Since his landing in Bombay as the president of Western Presidency, Irishman Gerald Aungier had never slowed down his activities to see the growth of Bombay as a major commercial center in the British empire.

Sion Fort in Mumbai was constructed by Aungier, the Governor of Bombay, in the interest of offering a passage from Bombay to the neighbouring island of Salsette. It held prime importance to the British as Salsette was in the fist of the Marathas, the ethnic group of the current Taoiseach‘s father.

When Aungier became the governor of Bombay, he made the city more populous by attracting Gujarati traders, Parsi ship-builders, and Muslim and Hindu manufacturers from the mainland.

In 1674, Aungier sought assistance from Court of Directors to erect a small church in the centre of the town; it became the first Anglican church set up in Mumbai, named after St Thomas, one of the 12 apostles of Jesus Christ, who had come to India to spread the teachings of Jesus. Before this, many Catholic churches like St Michael’s Church in Mahim (1534), St Andrews in Bandra (1575), Portuguese Church in Dadar, and a few in Vasai already existed. However, this was the first church to become operational on Christmas Day in 1718.

Aungier wrote, "Shivaji bears himself manfully against all his enemies."

Aungier was the Governor General of Bombay when the warrior Shivaji assumed the title of Sovereign king of Marathas, Chatrapati Shivaji Maharaja, and he was the British official who sent emissaries to Shivaji’s coronation in Raigad. The English had lately suffered severely at the hands of Chatrapati Shivaji Maharaja. In 1664 their courage had saved themselves and their neighbours during the sack of Surat. But their factory at Karwar was plundered in 1665, and their factory at Rajapur in Ratnagiri in 1670. In fact, Irishman Aungier was at Surat when Chatrapati Shivaji Maharaja attacked it, and that was what made Aungier decide to move the seat of British government from Surat to Bombay – where he could build his own forts and carve out his own territory. For this, they developed forts in Colaba, Bandra, Dongri, Dharavi, Madh, Mahim, Mazagaon, Sewri, and Worli.

Taoiseach Leo Varadkar represents Indo-Irish values, including resisting all forms of oppression. In fact, in 2017, Varadkar became Ireland’s first openly-gay, first mixed-race, and youngest Taoiseach. In doing so, he showed the power of Ireland as a tolerant and inclusive country, where all Irish have an opportunity to excel in life.

Apart from the fact he is Irish from his maternal side, even from his paternal side he comes from a region that has had deep connection with Ireland. The return of Leo Varadkar as Taoiseach has given India and Ireland another reason to come together and celebrate our commonalities and march together as two friendly nations to make the world a better place to live in.