Michael J. Moffat spent almost 95 years in an unmarked grave before being honored in a special ceremony this year. 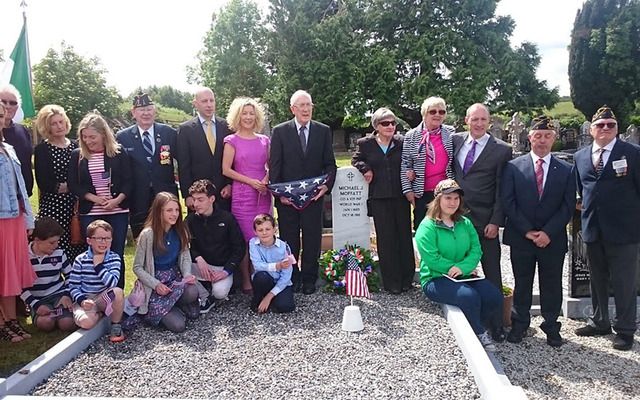 Michael Moffat's family and the American Legion at is newly erected headstone. Michael Noone

An Irish-born US soldier who has lain in an unmarked grave for almost a century finally received his own headstone this month in a special ceremony held in his honor.

Michael J. Moffatt was born in Cootehall, Co Roscommon, the fifth of 12 children born to Peter and Eleanor Moffatt and he immigrated to the United States when he was 23 years old. He worked as a railroad conductor before moving to the Western Electric Company, where he was working when he was drafted in August 1917, four months after the US officially joined the First World War on April 2.

Moffat served in Company "A" of the 105th Infantry Regiment, 27th Division, but he was "killed in action" less than a month before the Armistice was signed on November 11, 1918.

Read more: Diary of Dubliner who lived through 1916 and World War One online

The new headstone supplied by Patrick Gorman. Image: Michael Noone

Following his death on October 18, 1918, the Irishman was buried in the Somme American Military Cemetery, but at his family's request his body was returned to Ireland in 1922. The Irish Civil War was raging at the time and, therefore, Moffat's body was buried in Kiltoghert, Co Leitrim with minimal ceremony and no military frills. He was buried in a family plot, and his grave was left unmarked for almost 95 years until the US Department of Veterans Affairs got involved this year.

With thanks to the work of Michael Noone, of the American Legion in Ireland, and Michael Moffatt's nephew, Eamon Moffatt, as well as Patrick Gorman of Gorman Research, Dixon, Illinois who supplied the marker, a US-style military headstone was finally unveiled over Moffatt’s grave on June 4.

Noone, an air force veteran, discovered that an American soldier killed in France during WW1 was buried close to his home in Ireland over a year ago and but wished to better honor the unmarked grave. The American Legion and Moffat’s family finally conducted a ceremony in the proper military fashion this month. The grave was blessed  by Fr. Brendan McDonagh and a wreath was laid on behalf of the American Legion. A lament and march music was also played by a piper and both the US and Irish national anthems were played, all part of a ceremony the family and Noone felt was well-deserved by the Irish war hero.

A piper playing by the grave on June 4. Image: Michael Noone

His nephew Eamonn unveiled the headstone while the family was presented with an American flag to honor their family member's service.

The headstone itself was supplied by Patrick Gorman, who has previously provided 30 such markers to previously unmarked graves, mostly for graves in Co. Mayo. Dixon has also been responsible for securing 40 headstones for graves in Oakwood Cemetery in his hometown of Dixon.