The letters of a mother in Dublin, writing to her son who was missing in action in the Balkans in 1916, have been published online. 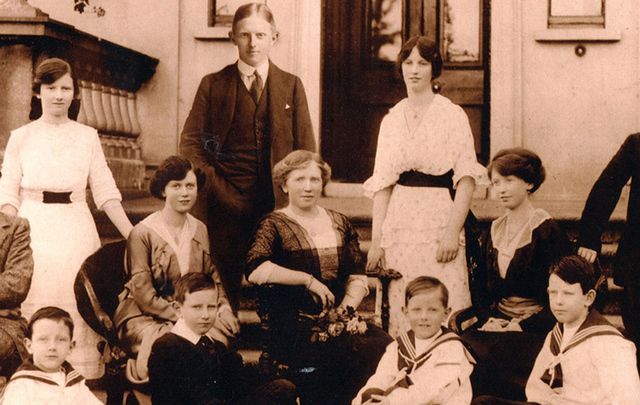 Editor's Note: One hundred and one years ago this month, from April 24 to 29, the Easter Rising took place, changing the nation of Ireland forever. In the run up to that historic anniversary, we take a look back at some significant incidents and snippets from that time - from newspapers coverage to little-known facts, individual acts of heroism to how the actions of those who lost their lives changed history.

The letters of a mother in Dublin, writing to her son who was missing in action in the Balkans in 1916, have been published online.

Mary Martin, from Monkstown, Dublin, wrote letters to her missing son, starting in January 1916. Shortly before this time, she had been told that her son, Charlie, a soldier with the Royal Dublin Fusiliers, was missing on the Salonika front.

The wealthy Catholic mother of 12 children wrote letters to her son in a diary recording the daily activities of her family and friends against the backdrop of the Easter Rising in Dublin and the ongoing First World War.

In total, there were 132 diary entries. She wrote them to her son in the hope that when, and if, he returned from the war he would be able to catch up with the daily goings on of his family in Dublin.

In her first diary entry she said, “Since I heard you were missing as well as wounded, it has occurred to me to write the diary in the form of a letter. We hope to hear from you soon.”

Martin’s diary ended on May 25 1916. By this time, she had been told that her 20-year-old son had been captured and killed the previous December.

Director of the project, Professor Susan Schreibman said, “It is a very poignant collection, written by a woman whose experiences were similar to many mothers of the time.

“The diary was never meant for public consumption, so it is very candid. These were ordinary people going through extraordinary times.”

She added that the project “provides a model of how we can bring alive historical treasures too infrequently seen by the public.”

The project was launched in 2012 at Trinity College Dublin by Ireland’s Minister for Arts, Heritage and the Gaeltacht of the time, Jimmy Deenihan. Minister Deenihan said at the launch, “This online edition is a rich source for anyone interested in Irish history, military history, women’s history and genealogy and takes its place within a collection of other publicly available online resources that shed light on Ireland’s complicated past.”

In the diary, Mary Martin writes about how news of the Easter Rising travelled from Dublin city center out to the South Dublin coastal town of Monkstown.

On Tuesday, April 25 1916, she wrote, “A very quiet peaceful day here but we hear (no newspapers published or mails arriving) that the Sinn Féiners are still in possession of GPO, & Westland Row & are defying the military. They say several people have been killed & that the GPO has changed hands a couple of times.”

The next day she continues, “Still no authentic news but it appears the Sinn Féiner still hold the City.”

“It is predicted food will get very scarce so ordered what I can conveniently get. No mail boat came in so there is no tidings of the boys. In the afternoon I went to the Tea Rooms we had a good many soldiers & sailors mostly of Staffordshire regiment. This has been a glorious day it is too terrible to think how it is being desecrated with murders & pillage for of course the mob is looting the shops.”

Her entry on April 28 shows the stark juxtaposition between the city center and military life and Martin’s own domestic settings.

She writes, “It is reported that Connolly & Countess Markievicz & Sheehy Skeffington have been shot. The boys marked out the Tennis Court so I presume play will now begin for the Season.”

The team used multiple resources to expand on and detail the Martin family’s historic life.

Sister Isabelle Smyth of the Medical Missionaries of Mary, an order founded by Martin's daughter Marie, helped the team to provide biographical background on the family.

Sr Maura O’Donohue, who nursed Martin before her death in 1955, was present at the launch of the diary. She spoke about Martin saying that she was “very gracious, serene and quiet lady, who had great love for her children”. Larry and Clive C. Martin, two of Mary Martin’s surviving relatives, were also present.

The diary can be viewed on Trinity College’s website here.