Recalling the ancient traditions of Irish funerals this Halloween season

Irish funerals are deep-rooted in traditions that can be traced back to the 12th century. 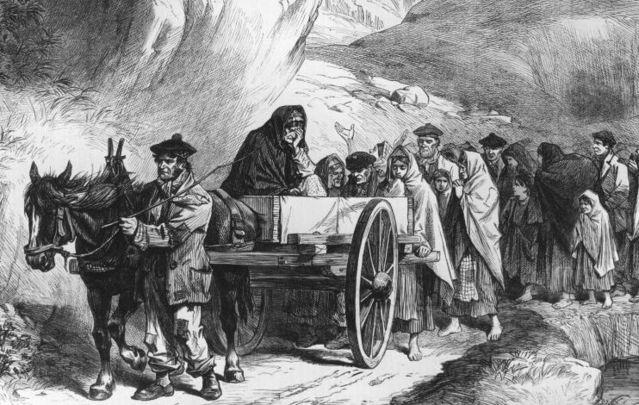 A depiction of a 19th century funeral in Connemara. The Royal Irish Academy provides a detailed account of Irish funeral rituals from the 12th century. Getty Images

While Irish wakes and funerals are well known for being large affairs full of emotion, reminiscing, prayer, and song, these traditions are nothing new.

As far back as the 12th century, the Irish were widely known for their remarkable funeral customs. According to Volume 4 of the “Transactions of the Royal Irish Academy,” a crowded funeral was the only proof needed that the deceased was a beloved member of the community. The volume includes a detailed account of old Irish laments, called Ullaloos, as well as interesting funeral and wake customs.

“It has been affirmed of the Irish that to cry was more natural to them than to any other nation, and at length the Irish cry became proverbial,” the book says. “The Irish then musically expressed grief – that is, they applied the musical art, in which they excelled, to the orderly celebration of funeral obsequies.”

Mourners at a funeral would divide in two, with one section at the head of the deceased (who would be elevated and ornamented with flowers), and the other at the feet. They would alternate verses of the laments, led by two chief bards, and join in song at the chorus. The Ullaloo would commence with the chief bard at the head singing the first stanza in a low tone accompanied by a harp.

After spending some time recalling the virtues and vices of the deceased, the two semi-choruses would then take turns “interrogating” the corpse – they would ask questions like, “Why did you die? Was your wife faithful? Were your sons dutiful? Were your daughters chaste?”

Each Irish province had different funeral songs – the “Ulster cry” was different in melody from the “Munster cry,” for example.

In the glossary for her novel "Castle Rackrent," Maria Edgeworth spoke about these customs: “[A crowd would] gather as the bearers of the hearse proceed on their way, and when they pass through any village, or when they come near any houses, they begin to cry, ‘Oh! Oh! Oh! Oh! Agh! Agh! Agh!’ raising their notes from the first ‘Oh’ to the last ‘Agh’ in a kind of mournful howl.

“This gives notice to the inhabitants of the village that a funeral is passing, and immediately they flock out to follow it. In the province of Munster it is a common thing for the women to follow a funeral, to join the universal cry with all their might and main for some time, and then to turn and ask, ‘Arrah! Who is it that’s dead? Who is it we’re crying for?'"

Between one and six priests usually attended these funerals, and would be paid to repeat mass – the fee would usually be according to the funds of the deceased. If the deceased was very poor and left behind a wife and children, the priest would go around to each guest and collect contributions for the widow.

According to Edgeworth, old women with loud cries were held in high regard and were in great demand for attendance at funerals.

“Even beggars, when they grow old, go about begging for their own funerals. That is, begging for money to buy a coffin, candles, pipes and tobacco.

Edgeworth mentions one comedic rendition of the Irish Ullaloo from a Dublin play, in which a chorus of old women were lamenting for a decent amount of time, “with all the necessary accompaniments of wringing their hands, wiping or rubbing their eyes with the corners of their gowns or aprons, before one of the mourners suddenly suspends her lamentable cries, and turning to her neighbor asks, ‘Arrah now, honey, who is it we’re crying for?'"

Do you know of any other Irish funeral traditions? Let us know in the comments

100 years ago today, Kevin Barry was executed in Dublin