The Irish have historically put their own spin on the practice of wakes and grieving the dead. 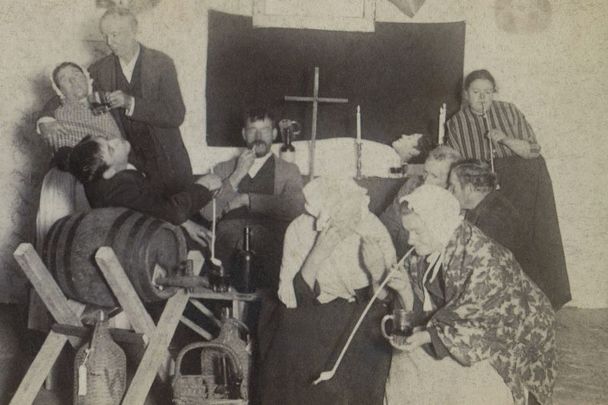 The Irish wake, by definition, was a celebration of the life of the deceased, full of uniquely Irish customs.

If you've ever been to an Irish wake, you'll know that while it can be a sad affair, Irish wake songs and Irish wake customs make it easier, if possible, the grieve the one you've lost.

If you like the idea of Irish wakes and funerals, here is an explainer of how they used to function:

Irish wakes are anything but a somber affair. Merrymaking was a common part of the traditional Irish wake and a major part of the grieving process in Ireland.

A pagan ritual was the root of much of the goings-on at an Irish wake and much of the carrying-on was frowned upon by the church. Storytelling, mischief-making, and games were all part of the send-off in an attempt to ease the suffering of the deceased's family.

The wake custom most likely has its roots in the ancient Jewish custom of leaving the burial chamber unsealed for three days with relatives returning during that time to check for any signs of life.

There is a myth that the tradition first came to Ireland as a result of the frequent lead poisoning suffered by drinkers of stout from pewter tankards. As this lead poisoning often left drinkers in a catatonic state resembling death—á la the Father Ted episode in which Father Jack is thought to have met his maker—the mourners were required to keep a watchful eye on the body in case they'd made a terrible mistake.

Whatever the true story behind its beginning, the wake gives family and friends one last opportunity to remember the life of the person they've lost before the burial, an attempt to offer some kind of solace in the face of their loss.

As in other Celtic countries, Irish mourners adopted the custom as a way to keep vigil over their dead until the time of burial, and it evolved into an occasion mixed with both sadness and merriment.

Lewd songs, pranks, and games with names like "Priest of the Parish" and "Hide the Gulley" were commonplace at wakes up until the mid-1900s.

Even contests of strength, which included lifting the corpse, were common.

Another prank often played was hiding under the corpse’s bed and shaking it when someone walked in, scaring the living daylights out of them.

These activities and their pagan origins were severely frowned upon by the church, which tried to stamp out the custom. Official action was only taken, however, when a wake turned particularly scandalous.

How to throw an Irish wake

An Irish wake began when neighborhood women came to the house and washed the body of the deceased. More often than not, the wake was held in the deceased's own home or in that of a close relative. The corpse was then covered in white linen and adorned with black or white ribbons.

Custom dictated that crying could not begin until after the body was prepared, for fear that evil spirits would be attracted to the body and would take the soul of the deceased.

Female keeners were often hired by the family, and they wailed and cried and recited poetry, lamenting the loss of the loved one. The principal mourner stood at the head of the bed striking the first note or wail.

Within the house itself there were also many traditions that had to be adhered to.

These customs included the laying of clay pipes, tobacco, and snuff in the room. Every male caller was expected to take at least a puff. The smoke kept evil spirits from finding the deceased. Usually, a pipe and tobacco were placed on a table next to the body. On some occasions, a pipe was also laid on the deceased's chest.

What to bring to an Irish wake

Still, to this day, the wake is a sign of the strength of community in Ireland with neighbors and friends supporting the family with pot loads of tea and trays of sandwiches to feed the hoards arriving at their home to offer their condolences.

It was also common to have a drink for the deceased and so bringing a drop along with you would not be refused.

What to wear to an Irish wake

It was common (and is still relatively thought of as a good way to pay respect in Ireland) that friends of the family who did not know the deceased would still attend the wake, with close male friends and neighbors traditionally arriving late in the night to volunteer to sit with the body and letting the immediate family get some rest before the burial. This assured that the body was never unattended, as was required by tradition.

The majority of mourners would leave by midnight after enjoying some food and drink but close friends and neighbors would stay through until the morning. The rosary would be said twice with mourners in attendance; once at midnight and a second time when drawing close to morning.

Earlier on in the evening, if the weather was good, the male mourners would gather outside but would always congregate in the kitchen if not.

What has replaced the Irish wake

While wakes are still held in the more rural parts of the west of Ireland, funeral parlors have sprung up across the country in the past few decades and the wake tradition has become in some ways a part of historical Ireland.

Nowadays, the act of laying out the body at the home has been replaced by the "viewing," a more subdued affair that takes place in a funeral home. Both will typically take place for one night to allow all those who wish to visit the body to attend.