What does the Irish term “American wake” mean?

As the name suggests, an American wake is quite similar to a funeral wake, except for one key difference; the person being waked is still alive. 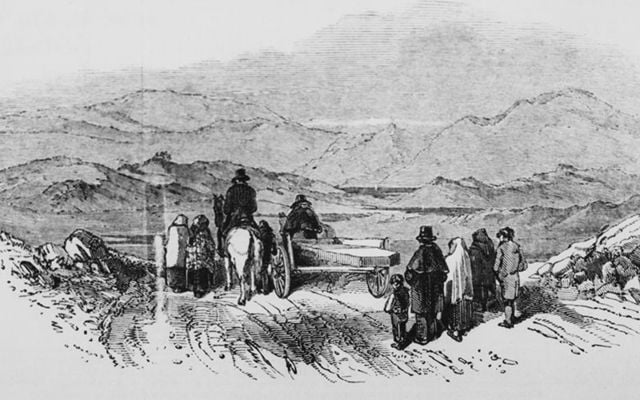 American wakes are believed to have originated during the famine. Getty

An American wake has been synonymous with Irish emigration to the United States for over a century, but what exactly does it mean?

As the name suggests, an American wake is quite similar to a funeral wake, except for one key difference; the person being waked is still alive.

The term originated in rural Ireland in the 1800s at a time of poverty and famine, when emigration to America meant a one-way ticket and never seeing your family again.

Since many Irish emigrants were leaving behind a life of poverty, the American wake represented a last chance to ever hear from a departing man or woman.

The emigrant was heading into a life of uncertainty with little money and a treacherous voyage across the Atlantic Ocean ahead of them and there was no guarantee that they would ever be able to communicate with their family again.

The American Wake, therefore, was the chance for many sons and daughters to say a last goodbye to their parents as they would do at a funeral. Simultaneously, it was a chance for family and friends to say their last goodbyes to the young emigrant.

A traditional American wake began at night time and continued through to the early hours of the morning. However, it was mostly a somber affair and it lacked the joy that usually accompanies an all-night gathering in Ireland.

There was little dancing and, in some cases, there was no alcohol. Instead, relatives and well-wishers offered the young emigrant advice about life in America and the tone of conversation was generally serious.

The wake was usually held on the evening prior to the emigrant's departure and the young emigrant would have spent the previous days visiting friends and family to inform them of their impending departure. All who were close were expected to attend the wake.

Women renowned for their ability to lament were invited to the wakes to give emotional eulogies about the departing emigrant. They traditionally delivered the eulogies in a high-pitched wail, resulting in rooms full of wailing women and weeping men.

In more affluent areas, the American wake was a more joyful occasion filled with drink and refreshments and there was generally a fair amount of singing and dancing.

In both affluent and poverty-stricken households, the morning after the American wake was similar throughout the country. Friends and family would accompany the departing emigrant to the port or to the train station to say their last farewell, never to see their loved one again.