"Irish Famine Migrant Stories in Ontario" will tell the untold stories of the Irish Famine migrants who endured a typhus epidemic while emigrating to Canada. 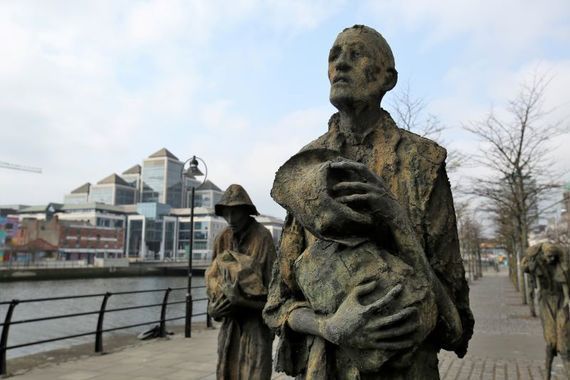 A new virtual exhibit telling the story of Irish Famine emigrants in Ontario is set to go live on St. Patrick's Day.

"Irish Famine Migrant Stories in Ontario" by the Irish Park Foundation will go live at 6 p.m. on Wednesday and will tell the untold stories of the Irish Famine emigrants who endured a typhus epidemic while migrating to Canada.

The virtual exhibit, which took more than four years to put together, will follow the 100,000 famine migrants who crossed the Atlantic Ocean to Canada during the Great Hunger on "coffin ships" that claimed the lives of roughly 20,000 people.

Dr. Jason King of the Irish Famine Archive, who helped curate the exhibit along with the Irish Park Foundation, likened the experiences of Irish people during the Famine to caregivers during the COVID-19 pandemic and said that the exhibit paid tribute to healthcare workers.

"The kind of pressures on caregivers now are in some ways comparable to what happened in 1847," Dr. King said.

"Dealing with an infectious disease that is little understood requires a great deal of courage. That courage was exhibited in 1847 and that courage is exhibited again today. I guess this sort of unintended consequence of this exhibit is where we hope it will also pay tribute to caregivers now."

William Peat, the executive director of the Irish Park Foundation, pointed to the fact that 16% of Ontario residents claimed Irish heritage and said that the new virtual exhibit was an important part of the region's history.

"Irish Famine Migrant Stories" was created in collaboration with the Canadian Museum of History and the Government of Canada and will feature several never-before-seen eye-witness accounts and interviews of Irish Famine emigrants. The exhibit will additionally feature descendants of Irish people who emigrated to Ontario during the Famine.

The exhibit includes the unpublished Famine diary of Stephen De Vere - the son of an Irish landlord who accompanied Famine emigrants across the Atlantic Ocean to bear witness to conditions onboard the coffin ships.