On This Day: Irish troops killed in the Niemba massacre in Congo

Irish Army troops were among the first on the ground and were wholly unprepared. In total 25 Irishmen were killed in action. 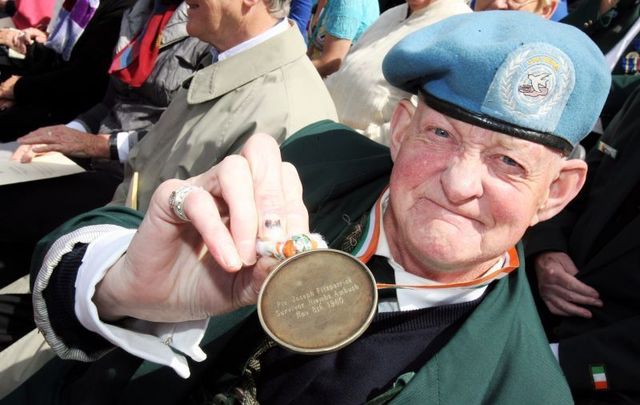 12/7/2009. Dublin native Joe Fitzpatrick, survivor of the Niemba Ambush 1960, is pictured at the National day of commemoration at the Royal Hospital Kilmainham Dublin. RollingNews.ie

On November 8, 1960, nine Irishmen and 25 Baluba tribesmen were killed when an Irish Army platoon in the Congo was ambushed. The Republic of Ireland had deployed troops as United Nations Operation in the Congo (ONUC) peacekeepers. Today, we remember those Irish men who fought and died all those years ago in the war-torn state.

Irish Army troops were among the first on the ground and were wholly unprepared. In total, 25 Irishmen were killed in action. The first pioneering batch of Irish Army officers who served in the war-torn African state of the Congo nearly 70 years ago was honored by the Irish Army, in a ceremony at Casement Aerodrome, in 2010.

The troops honored were the first contingent from the Army to head into the African jungle state and were notoriously ill-equipped for the mission that lay ahead of them. According to many reports and testimonies, they often arrived with little more than an apple, an orange, a banana, two cheese sandwiches, and a high-necked tunic which quickly turned to sandpaper.

"They may as well have been going to the moon as to where they ended up," one trooper from the Curragh Camp, the Irish Army’s primary training facility, said.
The Irish were among the first UN troops to arrive in the area to keep the peace. Since then, Ireland has continued its long and honorable tradition of peace-keeping in some of the most volatile and dangerous parts of the world.

Trouble was threatening to flare up at the time over the attempted secession of the Belgian-owned, diamond-rich province of Katanga to independent Congo in 1960.

Nine soldiers were killed in one ambush, the notorious Niemba ambush, which remains the single biggest loss of life suffered by the Irish Defence Forces in its history.

"I was just 17 and when you're that young you don't think of being afraid," said one private who served for six months in the State.

Another private described the day-to-day life with the division: "I was doing a lot of moving around on patrol, sleeping in tents and in evacuated houses - if we could get them."

The troops sound found out that the province they were assigned to was at least three times the size of Ireland, but despite this revelation, they enjoyed immensely the task they carried out.