During WWII, the Irish government was deathly afraid of IRA - Nazi collusion. So much so that they picked suspected Republicans and put them behind bars or concentration camp wire for years. 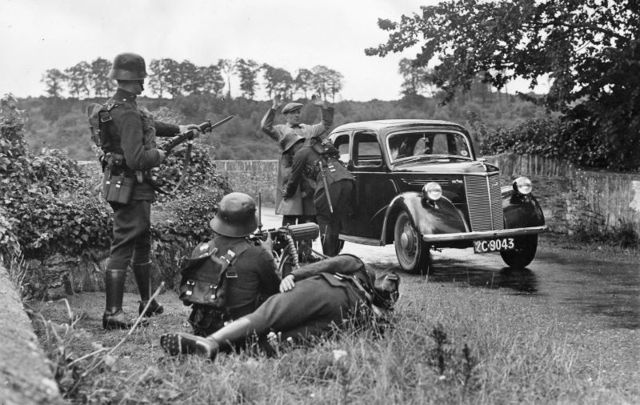 25th July 1939: A driver is searched by armed guards at a military checkpoint on a country road in Ireland during the Second World War. Getty Images

Excerpted from Echoes of Their Footsteps  Volume III by Kathleen Hegarty Thorne and Patrick Flanagan.

World War II brought an "Emergency" to Ireland, not an all-out war. The Irish government, though, was deathly afraid of some sort of collusion between the IRA and Nazi Germany. Both Northern and Southern Ireland government agents picked suspected Republicans and put them behind bars or concentration camp wire for years. Untried and sometimes not even members of the IRA, these men, and some women, languished in confinement for years.

Here is a glance at some of the unlucky ones:

John Joe “Sean” Maxwell (Dristernan, Drumsna, Co. Leitrim) Born on 22 July 1916, Sean trained as a teacher, and having just graduated, he was arrested in June 1940 and interned in the Curragh (MA).

IRA Internment, Maguire p. 247, states that Sean Maxwell went on a thirty-seven-day hunger strike from 22 May to 28 June (Twilight, p. 487), which took a terrible toll on his overall health. He also served as O/C of the Leitrim hut (Twilight, p. 710).

Following his release from the Curragh on 21 September 1944, he spent some time recuperating at Maud Gonne MacBride's home in Dublin. Still in poor health, he taught for a while in Rosary High school in Carrick-on-Shannon, but his license to teach was revoked by the Department of Education.

He travelled to America in the late 1940s, securing employment with the Harlem Savings Bank, where he worked until his death. In New York, Sean immersed himself in Irish Republican groups, as well as the GAA and the Leitrim Society. He wrote extensively for the Echo as well as the Leitrim Observer. His column in the Echo, “Forever Green,” was a very popular item in the Irish-American press. Sean was due to retire in late 1970, but did not live to enjoy the fruits of his labours. He died suddenly on 24 February of that year (“Noted Leitrim Columnist Dies in New York,” Leitrim Observer, 7 March 1970, p. 1) and (Leitrim’s Republican Story by Cormac O’Suilleabhain, p. 251)

Seamus Mongan (Ó’Mongáin) (Doohoma, Co. Mayo/Liverpool/Dublin) was born in 1914 by the Moy River, close to Ballina. Seamus’s father was a shopkeeper who moved his family from Belmullet to Dublin and ultimately to Liverpool. Seamus joined the IRA in Liverpool in 1932 and had eventually become the O/C of the Fianna (The Devil’s Deal, p. 108).

In 1933 he entered University, where he obtained a B.A. degree and subsequently entered UCD. His brother Gearóid was with him during these academic endeavors (Twilight, p. 884).

In August 1938, Seamus was arrested for gun possession when he barged into the office of the Belfast Linen Company on Exchequer Street in Dublin and wrestled with the manager, Mr. Bodkin. Bodkin’s wife came to the rescue and grabbed Ó’Mongáin by the neck of his shirt, resulting in a desperate struggle that sent all participants tumbling down the stairs and into the shop below, whereupon Ó’Mongáin was arrested and sentenced to four months. Seamus’s own wife played a part in the day’s drama when she tried to hand in bottles of stout through the Bridewell window that evening and was halted by Guard Melly, whom she taunted with “obscene” language, kicked in the shin, and whose face she scratched. (She was charged with disorderly conduct, bound to the peace for twelve months, and ordered to post £10 bail) (“Accused Man Sent for Trial,” Irish Examiner, 25 August 1938, p. 9) and (“Plea Granted Men Sent to Portlaoighise,” Irish Press, 21 November 1938, p. 7).

In the summer of 1939, Seamus joined the Publicity Bureau of the IRA and was caught in the New Year’s Eve raid at Ashgrove House.

In January 1940 he was charged with having in his possession unlicensed wireless transmitting equipment (D’A and Mac., Ó’Brádaigh), (Harry by MacEoin, p. 87), and (“Dublin Men Charged,” Anglo-Celt, 6 January 1940, p. 5). He was placed in Arbour Hill and Mountjoy and subsequently in the Curragh, but not before he was injured in a brawl at Mountjoy when guards tried to attack Sean “Jack” McNeela while the prisoners attempted to protect him. Seamus’s leg was twisted with such ferocity that he “suffered with a spine injury” for years after (Twilight, p. 885).

After his release from the Curragh, he ran the turf project at the Phoenix Park. He employed his brothers and many IRA men in desperate need of work. In 1950 Seamus obtained a teaching position in St. Patrick’s secondary school in Swinford, Co. Mayo, where he remained until his retirement in 1979.

“Seamus was a determined and tenacious campaigner on behalf of the poor and the underprivileged.” Died 12 October 2002 (“Seamus Ó Mongain,” An Poblacht Republican News, 9 January 2003)

Edward “Ted” Moore (Rathcurby, Mooncoin, Co. Kilkenny) was nearly fifty years old when he was interned in the Curragh on 29 August 1940 (MA). He remained in custody for nearly three years, departing the camp in May 1943 (DJ). Moore was a prominent figure in agricultural, sporting, and National circles. He was President of Mooncoin Coursing Club and owner of many outstanding greyhounds. As O/C of the South Kilkenny Brigade IRA, he figured in many exciting episodes during the Anglo-Irish War. He died January 1962, age seventy-one (“Sporting Personality Dies,” Irish Examiner, 15 January 1962, p. 4)

George Plunkett (Owenstown House, Foster Avenue, Dundrum, Co. Dublin/Ballymascanlon House, Dundalk) brother of Jack and executed 1916 leader Joseph, was interned in Arbour Hill in August 1939 after incriminating papers were found in his home in Dublin. He was arrested in May 1940 and admitted to the Curragh on 22 July (MA). He did not obtain his release until January 1944 (DJ).

He and his brother Jack had fought in the G.P.O. in 1916 and after the surrender were sentenced to death. When their brother Joseph was executed by the British, the sentences on Jack and George were commuted to penal servitude for ten years. George took the Anti-Treaty side in the Civil War and spent most of the war incarcerated in Mountjoy, where he participated in a forty-day hunger strike (“Death of Mr. George Plunkett in Louth Accident,” Irish Press, 22 January 1944, p. 1). George was tragically killed near his home in Dundalk on 21 January 1944 when he was flung from a pony cart (“Count’s Son Fatally Injured,” Irish Independent, 22 January 1944, p. 3)

Albert Price (Ailbhe Ó Pris) (Belfast) volunteered for service in the English Campaign (Twilight, p. 442). When he arrived in England without sufficient funds, he was forced to wear a heavy sweater in the heat of August. “I can’t help it,” he said, “I have no shirt” (Harry by MacEoin, p. 73). He returned to Ireland and was arrested and sent to Derry gaol, from which he escaped in March 1943. He was captured in the South on 21 March 1943 and was sent to the Curragh on 26 March 1943 (MA), where he was ordered to "sign out" (sign a statement pledging NOT to engage in any illegal activity) (Twilight, pp. 454, 748) and (Finely Tempered Steel, p. 44).

Price later married Bridie Dolan’s sister, the mother of Dolours and Marian Price, who went on hunger strike in 1974 and were force-fed for more than 167 days (Twilight, p. 523). He went forward as an Independent Republican candidate in the British General Election in West Belfast in 1974 to highlight the position of his daughters who were on hunger strike at the time. He was heavily outpolled by SDLP candidate, Gerry Fitt, and was disowned by Sinn Féin for his independent efforts. Died July 1996, age eighty-one (IRA Bombing Campaign, McKenna, pp. 25, 170)

Laurence Dunlea (Carrigtwohill, Cork/Moilliett Street, Winson Green, Birmingham) age thirty-six, a carpenter by trade, was sentenced to twenty years behind bars in July 1939. When he was sentenced, he proclaimed, “As a soldier of the Irish Republic I refuse to plead” (“Birmingham Explosives Trials,” Irish Independent, 17 July 1939, p. 11) and (“China’s Black-Out about Moon Enterprise,” Munster Express, 25 July 1969, p. 5). On 6 April when police had searched his room, they had discovered six sticks of gelignite, a loaded gun, and twenty-six rounds of ammunition (IRA Bombing Campaign, McKenna, pp. 48, 186). He spent his days in Parkhurst prison (“Irish Political Prisoners in Britain,” Connaught Telegraph, 1 November 1947, p. 5) and (“30 I.R.A. Prisoners in British Gaols,” Western People, 1 November 1947, p. 3) and was released in November 1948 (“Freed Irishmen on Way to Dublin,” Irish Independent, 9 November 1948, p. 2). Died 13 November 1991.

Mary “May” Laverty (7 Wexford St., Dublin) was a long-time Republican who became a school teacher, was involved with the National Executive of Saor Eire, later joined the Republican Congress, and in the late 1940s became a candidate for Clann na Poblacht (Twilight, p. 435) and (List of Republican Women Prisoners, Twilight, p. 945). She was imprisoned from June 1940 until Christmastime 1943 (DJ).

*Abbreviation sources of some information: DJ -  Department of Justice,  MA - Military Archives, Twilight  -The IRA in the Twilight Years by Uinseann MacEoin