January 27, just five days before the feast of Brigid, is the feast day of a much lesser-known Irish holy woman - Li Ban, Ireland’s Mermaid Saint. 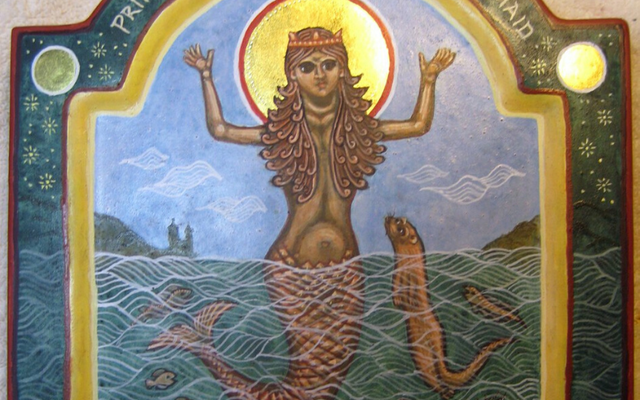 Lí Ban’s story dates from 6th century Ireland and has been preserved not only in medieval writings but also in the oral tradition of scéalaíocht (storytelling) passed on from generation to generation.

The “Annals of the Four Masters’, compiled by Irish monks in the 17th century, tells of a wondrous happening in the year 558:

The annals also record that Lí Ban was baptized by Comgall and given the name Muirgen, which means born of the sea but her story begins 300 years earlier.

Lí Ban was the daughter of Eochaidh, King of Ulster. She and her pet dog were the only ones to survive when Eochaidh’s palace and lands were flooded, drowning all who lived there and forming the great body of water we know today as Lough Neagh.

For a year she lived alone in a bower under the lough with only her dog for company. Then, in her loneliness, she prayed to the goddess Danu asking to be turned into a salmon so she might swim with the fish of the sea for company. Danu only half granted her wish. The little dog became an otter, and Lí Ban was turned into a mermaid.

Lí Ban swam out of the lough, along a great river, and into the open sea, and there she drifted for the next three hundred years fulfilling the prophecy:

Liban will swim eastwards, westwards, hither, thither, over each sea.

By the time 300 years had passed, Comgall had founded his great monastery in what is now Bangor, County Down, on the far northeast coast of Ireland. It was known as Bangor Mór and soon became revered throughout Ireland for its saintliness and learning. Young men came from every corner of the land to study there.

It happened that one-day Comgall sent Beoan and some other monks to Rome with a message for Pope Gregory and while they were at sea Beoan caught Lí Ban in his fishing nets. She promised to return within one year.

When a year passed, she came ashore, and Comgall baptized her with the name Muirgen. She died not long after, Comgall having promised her a heavenly reward and she became known as the Mermaid Saint.

You can still find memories and stories of Lí Ban today. The ancient abbey is long gone but if you go to Bangor you will find a new abbey, where Comgall is remembered still. A handmade quilt hangs on the transept wall, and in one of its squares, you will find the mermaid saint floating on the crest of a sea wave.

Lí Ban’s story was published in May 2020 in a children’s book from Candlewick Press. “Rónán and the Mermaid” is a picture book retelling by storyteller Marianne McShane, with full-color illustrations by Jordi Solano. You can read more about it at www.mariannemcshane.com.