Irish state attempted to cover up severe levels of famine among substantial numbers of the population. 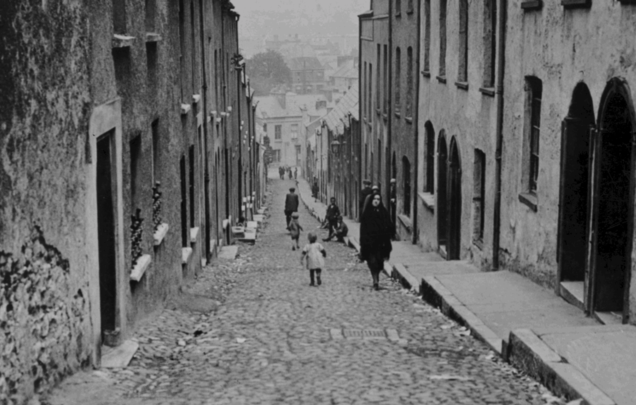 A "typical street in Cork", published in c 1927. Keystone View / Library of Congress

State files uncovered in 2014 revealed that in 1925, the government of the newly independent Irish state attempted to cover up severe levels of famine among substantial numbers of the population, denying that 750,000 people were facing starvation.

In an eye-opening report that was published on TheJournal.ie, Fin Dwyer of the excellent Irish History Podcast explained that at the time the country was still trying to recover from the war for independence, civil war, and economic depression. Unemployment was widespread, reaching nearly 100,000 across sectors.

The conservative governing party, Cumann na nGaedheal, planned to bring the country back with a regime of extreme austerity. The government believed large-scale farmers were key economic drivers and devised a plan to cut the richer farmers' tax and costs and reduce government expenditure. In 1923, wages were cut by 16% and the seven day work week was reintroduced. Finance Minister Ernest Blythe cut the old age pension by ten percent in 1924.

Crop failure was the last thing the government needed in this time of austerity, but come it did. The crop harvests of 1923 and 1924 were very poor due to exceptionally rainy weather, even for Ireland. Potato crops rotted in the fields, and animal stocks died from lack of fodder. Turf—the main fuel source for the rural poor—proved impossible to dry out. The west of Ireland, particularly the Atlantic Islands, were hit the hardest.

The Freeman’s Journal described the severity of the crisis while reporting from Connemara, one of the worst-hit regions: “75% of the people had now no potatoes, their chief diet for the last 2 months, and the harvest prospects were never worse in living memory. There is no employment.”

The government approved £500,000 in aid, but the crisis continued to worsen. In January and February 1925, newspapers in Clare and Galway reported the deaths of over 10 people, mostly children, from starvation or disease related to starvation.

Initially, the crisis was recognized. President W.T. Cosgrave described the country’s dilemma as “considerably greater than normal, but comparison with 1847 is, I am glad to say not justified. There is no question of famine in that sense.” The government sent aid and shipping coal supplies to the west of Ireland.

But, once the starvation attracted international attention in early 1925, their approach changed, with many officials publicly denying there was a problem.

It is believed, as Dwyer notes, that a government cover-up was triggered by a telegram from the United States.

On February 11, the cabinet received a telegram from the editor of the Boston Globe, with a cover note from Seanad member and prominent businessman James Douglas.

The telegram sought official clarification on whether there was a famine in Ireland.

In his letter, Douglas said his opinion was that “the present propaganda in the United States, alleging that there is a famine, will do great harm to our credit in every way unless it is countered.”

After only three years of independent rule, the government was sensitive about the country’s image and feared international rebuke. It was either a choice of downplaying the crisis or risking their international reputation.

Further denials followed. On February 13, the Minister for Agriculture P.J. Hogan, while speaking in the Dáil, claimed: “There is no abnormal distress in the West this year. I say that definitely and deliberately. There is always distress in the West, but the distress this year is not…particularly unique….There is never real famine in the West unless there is a failure of potatoes, and there was no failure of potatoes this year.” His statements went unchallenged.

The government’s decision to deny the crisis had serious consequences.

The crisis continued without solution and private relief funds struggled to raise money while the government denied there was a problem.

Ireland was ultimately saved from a full-blown famine in late 1925 and 1926 by an improved harvest.

Read more: There would have been no 1920s Bloody Sunday without Michael Collins’ Temple Bar office