Chile was a Spanish colony at the turn of the 19th century, but it would be liberated just 18 years later with the help of Bernardo O'Higgins, the son of a merchant from County Sligo. 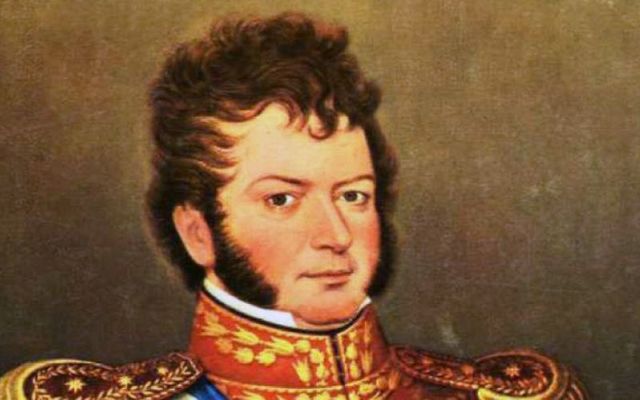 The Irish diaspora has left its mark all over the world, but it has arguably never had such an influence as it did in Chile during the 19th century.

Chile was a Spanish colony at the turn of the 19th century, but it would be liberated just 26 years later with the help of Bernardo O'Higgins, the son of a merchant named Ambrose O'Higgins from County Sligo.

The story of how an 18th-century Irish merchant came to live in Chile is shrouded in mystery. Ambrose, who later changed his name to Ambrosio, emigrated from his ancestral homeland of Ballynary in Sligo in 1751 at the age of 31 - a relatively old age to emigrate at during the 18th century.

He spent five years in the southern Spanish city of Cadiz where he developed his career as a wine merchant before traversing the Atlantic Ocean to Spanish-controlled Latin America.

He would later serve as Governor of Chile and Viceroy of Peru during a glittering political career in South America.

Just how a wine merchant from Sligo with no political experience came to be a force in South American politics is also a mystery. However, at some point in his life in South America, Ambrose O'Higgins became "the man", explains Chilean journalist and historian Alfredo Sepulveda.

Sepulveda lectures at the Universidad Diego Portales in Santiago and has penned a biography on the life of Bernardo O'Higgins. He told IrishCentral that Ambrose O'Higgins was at the epicenter of South American politics during the late 18th century.

Ambrose moved south to the Chilean frontiers between Spanish territory and native Mapuche territory and fathered his son Bernardo with a native girl who he could not marry as Spanish Government officials were not permitted to marry natives.

Ambrose never met his illegitimate son but financed his education in Chile, Peru, and later in Cadiz.

Against his father's wishes, the young Bernardo swapped Cadiz for London and began studying at a Catholic university. The decision vexed Ambrose, who cut off funding for his young son and caused him to live in poverty.

But it was during his time in London that Bernardo O'Higgins began to form ideas of Latin American independence, moving in a completely different direction to his father, who was ardently loyal to the Spanish throne.

He was inspired by the French and American revolutions of the late 18th century, while he was also inspired by Francisco de Miranda, a Venezuelan promoter of Latin American independence who unsuccessfully lobbied the British Government to support an independence movement.

Bernardo O'Higgins returned to Chile in 1802 with ideals of independence firmly implanted in his head, but it would be some years before he would become a significant figure in Chilean independence.

Upon his return to Chile, he inherited a large parcel of land from his father, who died in 1801, and became a gentleman farmer.

In 1806, he became a minor figure in Chilean politics when he was appointed to a colonial administrative council known as a Cabildo.

On September 18, 1810, Chilean politicians, with Bernardo among them, formed the Government Junta of Chile - a limited self-government in revolt against the French-dominated Spanish Government.

O'Higgins still remained a relatively minor player in the independence movement but quickly rose to prominence when the fight began.

Sepulveda explains that Bernardo O'Higgins was for all intents and purposes a military failure.

He had no formal military training and could have possibly based his military tactics on the teachings of Juan (formerly John) MacKenna, an Irish immigrant from County Monaghan who had been friendly with Ambrose O'Higgins and actually had military training. MacKenna would go on to serve as commandant-general in the Chilean army before he was killed in a duel in Buenos Aires in 1814.

Even with the guidance of MacKenna, however, O'Higgins lost most of the battles he entered and was prominent in the Chilean defeat during the first phase of the War of Independence, which saw pro-independence forces driven back into Argentina in late 1814 after the Battle of Rancagua.

O'Higgins, however, had retained his credibility thanks, in large part, to the incompetence of his rival and superior José Miguel Carrera, who took command of the pro-independence forces during the first phase of the war of independence.

Carrera's failures, coupled with O'Higgins' reckless disregard for his own safety during battle, saw O'Higgins rise to Supreme Commander of the Chilean independence forces ahead of the second phase of the war of independence known as the Reconquista (reconquest).

Sepulveda said that O'Higgins, unlike many of the aristocratic generals in the Chilean army, would fight alongside his men in battle and became a figure to rally behind.

"What made Bernardo popular was that he was a madman in battle," Sepulveda said. "He transformed himself in battle and was very courageous. He fought side by side with his men and It made him very popular in the army.

"These armies were not really armies, they were poor peasants without shoes and without proper uniforms. There was a lot of changing sides during the war, but Bernardo didn't have it among his men."

O'Higgins, as commander in chief of Chilean forces, helped to retake control of Chile during the second phase of the War of Independence in 1817, although he relied mainly on the help of Argentinian liberator José de San Martín.

Sepulveda described O'Higgins as San Martín's "sidekick" during the reconquest of Chile and said that he only had a nominal role in the invading army. O'Higgins was gravely injured in battle at Cancharayada in March 1818 and was unable to participate in the Battle of Maipú a month later that saw the Spanish forces defeated once and for all.

Sick and feverish, O'Higgins ran 10 miles to the battlefield when he heard reports that the Spanish had gained the ascendancy in the battle, leading to a famous embrace between O'Higgins and the victorious San Martín.

However, it was O'Higgins, not San Martín, who became Supreme Director of Chile in 1817, almost exactly a year before Chile proclaimed itself an independent republic in February 1818.

O'Higgins was granted dictatorial powers as Supreme Director and his six years in power divides opinion among historians.

Sepulveda is under no illusions that O'Higgins was a dictator, although not nearly as severe as Augusto Pinochet, who ruled Chile in the late 20th century.

Instead, O'Higgins was more like a Roman dictator with a nominal Senate all nominated by him.

"If we look at it with the eyes of the present, he was not a good leader, he was a dictator," Sepulveda said, adding that O'Higgins committed "human rights violations".

The most notable of these violations was arguably O'Higgins' failure to intervene in the execution of his political rival José Miguel Carrera, who was captured and hung by O'Higgins' supporters after a show trial in 1821.

Sepulveda, however, pointed out that context is key.

O'Higgins successfully installed order in Chile at a time when newly-liberated Latin American nations were descending into vicious civil wars.

"It was a tough time, the value of human life was not the same as we have today," he said.

O'Higgins was "terrified by what was going on in Argentina" and didn't want a repeat to happen in Chile.

Carrera, although executed under questionable circumstances, was marching with his army to launch a coup and depose O'Higgins as leader.

O'Higgins introduced courts, hospitals, colleges, libraries, and markets into the newly-liberated nation and believed strongly in the rule of law and written constitutions.

He began to lose popularity after his decision to build a naval fleet for Argentina's war in Peru that would be financed by Chile. The fleet "broke the country" financially, while O'Higgins also isolated himself from powerful political groups within the fragile nation, including the Catholic Church.

He was also accused of excessively centralizing power with a new constitution in 1822 that opponents argued was a desperate attempt to cling to his waning power.

However, when conservatives launched a coup to replace him in January 1823, O'Higgins did not desperately try to cling to power; but recognized that his time as Chilean leader was at an end and peacefully left office.

Deposed as Supreme Director, O'Higgins went into exile and intended to travel to Ireland to make contact with his father's family, but the idea never came to fruition.

Instead, O'Higgins stopped in the Peruvian capital of Lima and formed an alliance with Latin American liberator Simón Bolívar in the latter's attempt to liberate Peru from Spanish control.

He did not fight in the Peruvian War of Independence but joined Bolívar to celebrate the final liberation of Peru following the Battle of Ayacucho in 1824.

O'Higgins remained in Peru until his death in October 1842 and became almost as much a Peruvian as he had been a Chilean.

He remained a pariah in Chile from the time he was deposed as leader until after his death, with many people viewing him as a dictator.

A shift occurred toward the end of the 19th century, however, and many historians began to look at O'Higgins' legacy in a new light.

"Unlike other Latin American countries, which engaged in very violent civil wars after gaining independence, the time of disorder in Chile after independence was relatively short," Sepulveda said. "In a way, the idea of order is linked to Bernardo."

O'Higgins would soon become revered in Chile as its "founding father", Sepulveda said.

Today, his legacy is apparent throughout the country. An entire region south of the Chilean capital of Santiago is named in his honor, while the region's main university and soccer team are likewise named after him.

In Ireland, O'Higgins is modestly commemorated by a statue in Merrion Square, while his father Ambrosio is remembered with a statue at his birthplace in Ballynary, County Sligo.

In 2010, both Bernardo O'Higgins and Juan MacKenna were honored with commemorative postal stamps in Ireland and Chile in recognition of their role in the Chilean War of Independence.