Everybody knows that St Patrick’s Days celebrations as we recognize them today came from Irish America. 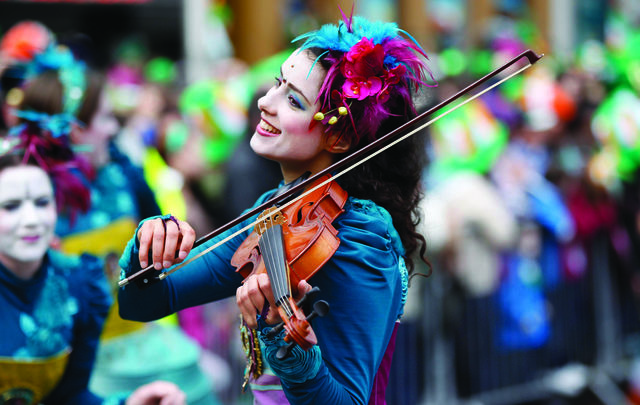 Everybody knows that St Patrick’s Days celebrations as we recognize them today came from Irish America.

Boston and New York both claim the title of the original St Patrick’s Day parade, while St Augustine in Florida also put their name up for the honor.

But how, and who, brought the festivities to Ireland first?

Like many other significant events of the early 20th Century in Ireland, one need look no further that Conradh na Gaeilge, or the Gaelic League as the organization was then known.

Perhaps inspired in part by their countrymen in the United  States, the Limerick branch of Conradh na Gaeilge proposed in 1901 that the organization should “take steps to have St Patrick’s Day observed as a general holiday” in Ireland, and stated that they hoped it would ultimately become “a great Irish National Festival.”

A year later, Conradh na Gaeilge established ‘Seachtain na Gaeilge’, a week-long festival in celebration of the Irish language, first held around St Patrick’s Day of 1902. The celebration of language ended with a sort of ‘prototype’ St. Patrick’s Day parade, similar to the large parades which had been held in the States for many years.

The Express, a popular newspaper of the time, reported that an “estimated at 20,000 the number in the procession that marched through the muddy streets”. An Claidheamh Soluis, the official publication of Conradh na Gaeilge proudly proclaimed that the march was “a decidedly Gaelic League demonstration” and that 50 branches of the organization “with their neat and artistic poplin banners and effective tableaux formed the principal part”.

That first parade in Dublin marched through the “drizzling rain and muddy streets” to Smithfield, a marketplace on the northern banks of the River Liffey,  There “a vast assemblage listened to the Irish [language] speeches.

Read more: Fun facts about Ireland and the Irish for St. Patrick's Day

The event was indeed very much a Conradh na Gaeilge affair, the organization seizing the opportunity to fundraise “with polite but persistent requests” for aid for the national tongue.

To this day St Patrick’s Day is an important fundraising day for Conradh na Gaeilge with members of the organization braving the often inclement Irish weather to collect money for the preservation and promotion of  Irish at parades all around Ireland.

The following year, 1903, the parade headed up the festival, with many groups and organizations taking part. A schedule, preserved in the National Library of Ireland, shows eight main sections of the parade, which again passed through the city center and culminated at Smithfield, where speeches were made.

Among those marching in the procession were the leaders of Conradh na Gaeilge, in carriages; various bands; members of the Gaelic Athletic Association; colleges, schools and educational bodies, included the Artane Industrial School Band who still take part in St Patrick’s Day festivities to this day; trade unions who were fighting hard for workers’ rights int he city at the time; various clubs and organisations from around Ireland; the political parties of the day; and member of the Dublin Fire Brigade to name a few.

A flyer posted around Dublin commanded the reader to “observe the National Holiday as an Irishman should.”

That same month the MP James O’Mara from the Irish Parliamentary Party introduced a Bill to the British House of Commons to make St. Patrick’s Day a bank holiday in Ireland every year. Conradh na Gaeilge again brought the issue to attention in An Claidheamh Soluis:

“That the feast of our National Apostle should be duly honored throughout the length and breadth of Ireland would be tangible and striking evidence of the existence of our distinct nationality, and of the power of the national ideal to affect the national life to a considerable extent.”

The Conradh believed that St Patrick’s Day would have the power to unite the people of Ireland “irrespective of classes, creeds, or politics” and that the universal observation of the day would strengthen the links between various factions of the divided country.

“Its special importance to the Gaelic League consists in this, that if the Gaelic League succeeds in causing for the first time within living memory, St Patrick’s Day to be observed generally as a holiday, it will from thenceforward be the greatest force in Irish," the organization proclaimed.

It urged its members in March of 1903 to “spare no effort” to secure the observance of the National Holiday.

Now Ireland welcomes thousands of her American children home to take part in one of the largest St Patrick’s Day parades in the world, where hundreds of American performers and musicians march through the streets of Dublin just like their ancestors over 100 years ago.