There, oblivious to the horror that was soon to befall him, JFK plays with his kids and a pony without a care in the world. 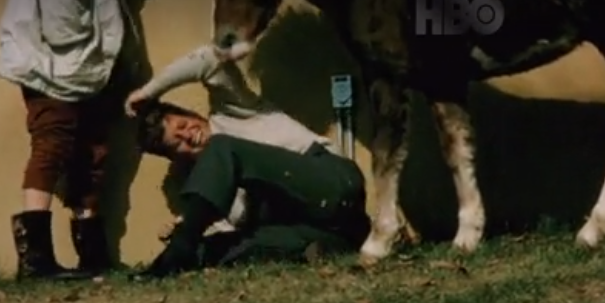 JFK plays with a horse the week before his death. HBO

An HBO doc shows exclusive footage of JFK playing with his kids the week before his death.

The clips appear in ‘The Newspaper Man’,  about the life and work of journalist Ben Bradlee who became friends with JFK whilst he was still the US Senator for Massachusetts.

Read More: JFK’s only grandson on Obama, life and Caroline Kennedy in government

Days before the President’s earth-shattering death, Bradlee was invited down to the Kennedy family farm in Virginia. There, oblivious to the horror that was soon to befall him, JFK plays with his kids and a pony seemingly without a care in the world.

Whilst the kids are playing the adults sip Bloody Marys on the patio and gossip. It was the calm before the great storm.

Read More: JFK Jr. would have run for president in 2020 but Caroline or her son may still yet

Bradlee went on to become executive director of The Washington Post in 1968 and he oversaw its coverage of one of the defining stories of the century: Watergate.

In 1975 he wrote a book about his relationship with JFK entitled “Conversations with Kennedy”.

He passed away in 2014 after a long struggle with dementia and is buried in Washington DC.