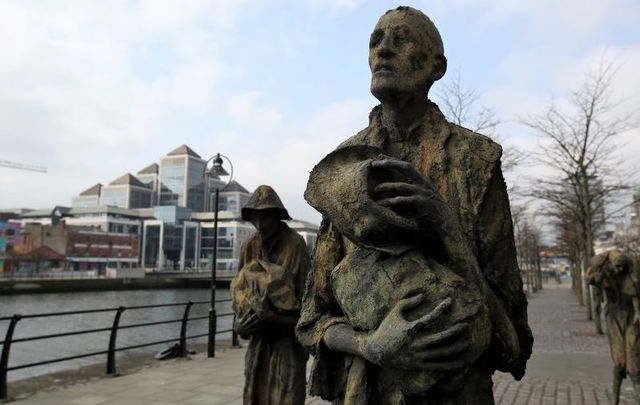 “The Famine emigrations represent one of the greatest population displacements of modern times, an exodus on a stunning scale that has no other nineteenth-century parallel,” writes Dr. Ciarán Ó Murchadha in his 2011 book, "The Great Famine: Ireland’s Agony 1845 – 52."

The total number who died during passage is unknown, but Dr. Ó Murchadha, who teaches history and Irish at St. Flannan’s College, Ennis, Co Clare, estimates that it may have been more than 80,000. Fever – due both to the condition of those who embarked and the filthy conditions aboard – was the primary cause of death.

Chief among the stigmas endured by the Famine Irish and inherited by their children, Dr. Ó Murchadha suggests, was the “brand of their Irishness” and, consequently, their inferiority. But for them – and subsequent generations – this was eased by the succor of Irish neighborhoods, particularly the trinity of the Catholic Church, Irish cultural societies, and major political organizations, until demography, democracy, and economic success enabled the Irish to tentatively assimilate within the majority society.

Charting a monumental record of abject suffering, from the destruction of the potato harvests, through to the degradation inflicted by the relief programs, the swell of fever pandemics through the workhouses, the mass clearances by landlords, and the hemorrhaging emigration, The Great Famine climaxes with a sober analysis of the consequences and causes of this seminal event in Irish history.

Approximately 1.1 million died and over a million emigrated during the Famine. The population of Ireland plummeted from almost 8.2 million in 1841 to 6.5 million in 1851. Among its legacies were the physical and psychological disabilities of Famine survivors in Ireland and abroad, a deep-seated hatred of Britain, ruptured social and communal intimacy, rising conservatism in Irish society, and a highly influential Catholic Church that met a gaping spiritual yearning and provided otherwise absent leadership.

The failure of private charity and state relief is central to explaining the extent of the Famine, insists the author. While contributions towards famine relief were received from the US president, the papacy, and, most movingly, from the Choctaw tribe of Native Americans – the Famine resonated with the ‘Trail of Tears’ deaths during their forced population transfer from Mississippi to Oklahoma in 1841 – its impact was tempered by soaring international food prices. While Britain spent £8 million on relief programs in Ireland during the Famine, most of it as loan advances, it spent £69 million on the Crimean War (1854 – 56).

Additionally, Dr. Ó Murchadha argues that the prevalence of providentialism – the belief among the British government that the Famine was an opportunity to reform Ireland – is essential to account for the Famine and, controversially, he believes Britain may have been guilty of genocide.

"The Great Famine: Ireland's Agony 1845-1852" is published by Continuum, an imprint of Bloomsbury Publishing.