Irish amateur historian Tony O'Herlihy set about unraveling the mystery behind a "thank you book" from a German school in Saarbrücken after his wife Mary died ten years ago. 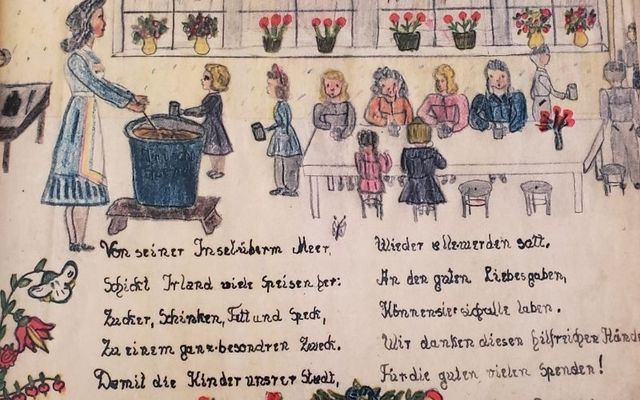 Reproduction of a page from the Saarbrücken Dankebuch (Thank you book). Tony O'Herliy

As Europe celebrated the end of the Second World War in May 1945, the Irish Government embarked on a significant humanitarian campaign, sending more aid than it could afford to war-torn Germany and other countries that had been decimated by the conflict.

Decades later, the story would resurface when an amateur Irish historian attempted to trace a German children's thank you book that belonged to his late wife.

Tony O'Herlihy had always been aware of the "Dankebuch" mysteriously left in his wife Mary's possession when she was a child and spent many evenings poring over its contents with his kids. However, he was inspired to dig deeper into the story after Mary passed away ten years ago.

The book is a collection of colorful illustrations and thank you letters from schoolgirls at the Cecilien School in Saarbrücken - a German city that was leveled in the latter days of the war which benefitted greatly from Irish post-war aid.

About 90 pages long, the Dankebuch is a unique historical treasure that is thought to be the only one of its kind in Ireland. 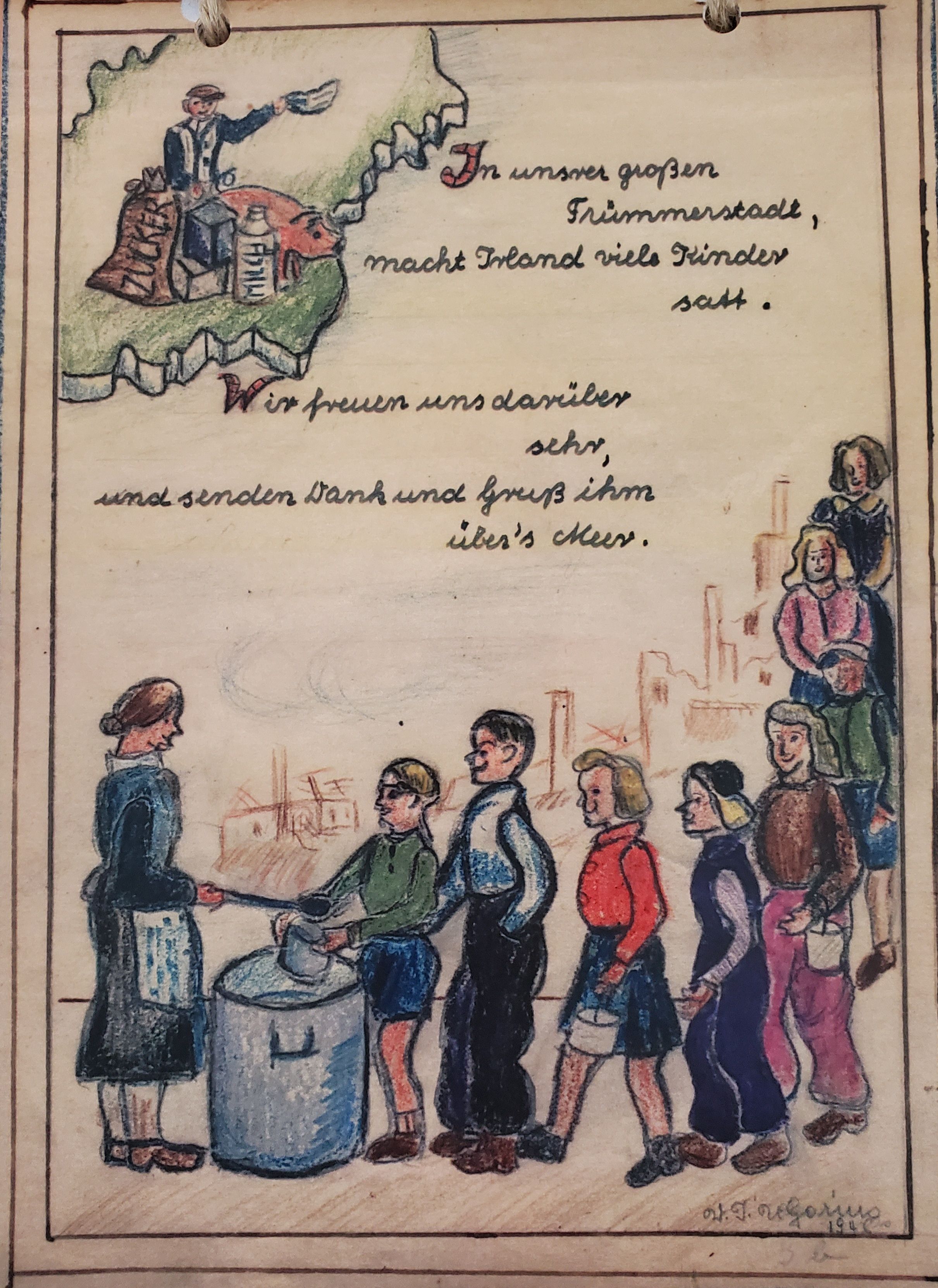 The book fell into Mary's possession after she won a children's art competition in 1955. Seeing that she had a flair for art, a family friend thought that she might like this colorful collection of thank you letters and presented her with the unique Dankebuch. In later years, Mary was unable to remember the man's name and the story of how the book came to Ireland remains a mystery.

However, Tony O'Herlihy has since discovered that children at the Saarbrücken Cecilien School presented the book to an Irish Red Cross worker in the city as a gesture of thanks. He has been unable to trace the book's journey any further.

The vibrant collection of drawings express unending gratitude to the Irish people and, as O'Herlihy explained, that gratitude was not misplaced.

Ireland was one of the first countries to offer donations of money and food to Germany after the war.

On May 18, 1945, 10 days after VE Day, Taoiseach Éamon De Valera addressed the Dáil and proposed sending aid to Germany.

The Irish Government agreed to De Valera's proposals as part of a large-scale humanitarian project that saw aid distributed throughout war-torn Europe even though Ireland was extremely weak economically at the time.

Furthermore, the Irish Government also sent 10.2 million kg of sugar, reducing Irish people's sugar rations from three-quarters of a pound a week to half a pound a week.

The total cost of the aid over the two years was estimated to be around £4.5 million  - roughly €200 million today - a colossal undertaking for a country that still relied on rationing to ensure that there was enough food to go around.

To put that into context, the £4.5 million donation amounted to £1.50 from every man, woman, and child in Ireland at a time when the average weekly salary was just £8, meaning that Ireland donated significantly more per capita than any other country in the world.

O'Herlihy told IrishCentral that the post-war donation was one of the first examples of Irish international aid, which would become prevalent around the globe in the decades that followed.

"This was the start of Ireland's contribution to world humanitarian aid that has morphed into all the charities and everything that has happened since then," O'Herlihy said. "It's amazing."

Approximately 15% of Irish aid sent to Europe ended up in Germany despite fears that sending aid to Germany would make Ireland appear to be pro-Nazi.

However, as Irish TD James Dillon summed up, "a hungry German was as much deserving of pity as a hungry Pole".

O'Herlihy said that aid was distributed indiscriminately throughout Europe.

A significant proportion of that German aid found its way to the decimated city of Saarbrücken.

The British Royal Air Force raided the German city at least 10 times during the final three years of the war, heavily damaging more than 8,400 buildings and dehousing more than 50,000 people. At least 75% of the city was destroyed in the raids, which left citizens on the brink of starvation by the time the war ended

O'Herlihy remarked that authorities distributed food to Saarbrücken citizens depending on how poorly they looked, such was the shortage of food in the city.

It is no surprise, therefore, that Irish food donations were the source of great jubilation in Saarbrücken, which is evident in the vivid colors and illustrations of the Dankebuch. 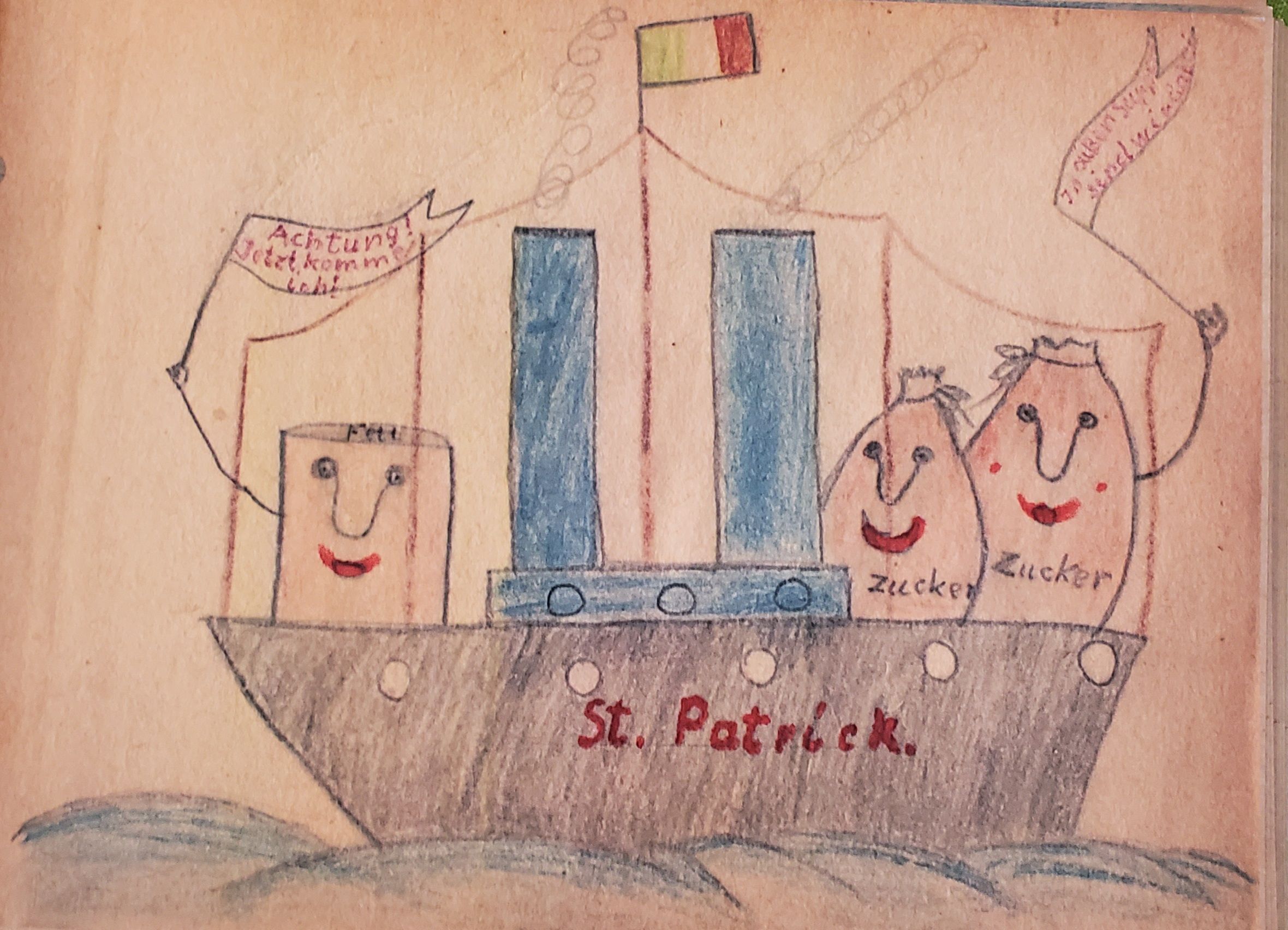 "The Irish sent lots of food to us from their island across the sea. Sugar, ham, and pork. For a very special purpose so that the children of our city are free from hunger. We thank these generous hands for the plentiful donation," wrote Cecilien student Anit Reinhart.

"Today there is good sweet onion porridge; a sugar lump was also very fine, let us take it from the children of Ireland. That night, we prayed for the Irish children," wrote Kristel Borner.

Those sentiments of gratitude and thanks were repeated again and again over the 92 pages of the Dankebuch, with some students going as far as to say that the Irish donations helped them survive the post-war era. Some students included drawings of their school receiving the welcome donation of food, while others drew pictures of Irish ships arriving in Germany. 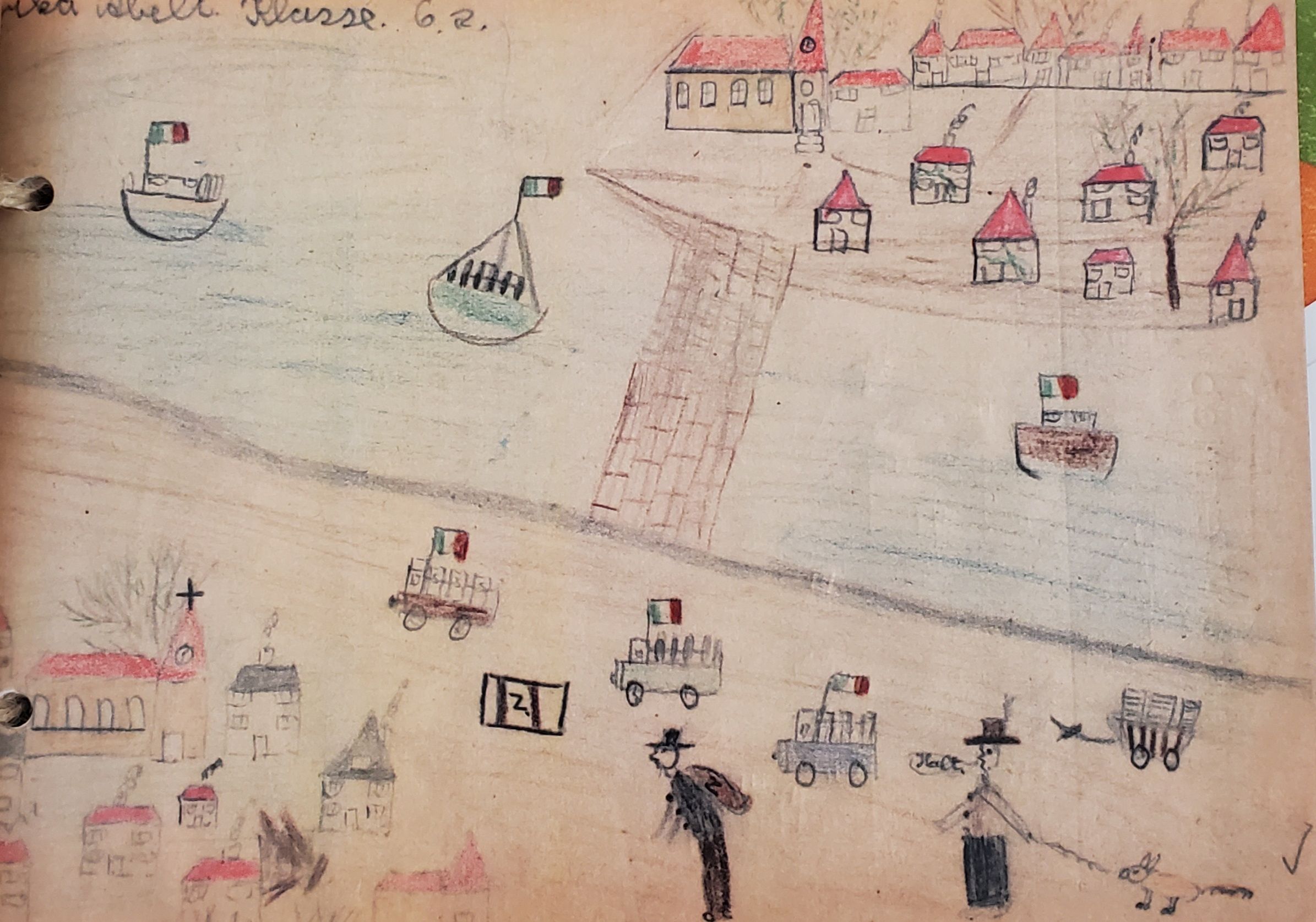 Tony O'Herlihy and his wife Mary often wondered about the story behind the Dankebuch when they examined it with their children and vowed to one day investigate its background. Unfortunately, Mary died in August 2011 before they were able to delve into the book's history, prompting Tony to take on the challenge as a tribute to his late wife.

"We always said that we'd investigate to find out what it really was, but it was always a case of 'we'll do it tomorrow'. After Mary died in 2011, I said 'tomorrow has come," he told the Irish Independent in 2015.

He brought the Dankebuch to the German Embassy in Dublin and caused a "great deal of excitement".

News of the Dankebuch made its way to the Saarbrücken Cultural Office, which placed advertisements in local newspapers and television in an attempt to locate former pupils at the Cecilien school.

The appeal was enormously successful.

A total of 31 surviving ladies and their families responded to the appeal and attended a gathering in the rebuilt building that was once their school in October 2012. Tony was unable to attend the gathering as he was holidaying in Portugal at the time, but at the insistence of the former pupils, a second gathering was organized for April 2013. He flew to Germany with his son Cian and his daughter Susan and met with 23 surviving pupils, describing it as a "special and very emotional experience".

Tony had previously sent reproductions of the Dankebuch to all surviving former students at the Cecilien school.

One former student who was overcome with gratitude sent Tony a letter telling him that reproduction "bordered on a miracle".

She also described the impact of the Irish donations at a time when Saarbrücken lived with no electricity, gas, or running water and foraged for whatever food they could find in fields neighboring the city.

She wrote that she could not put the "feeling of having a good plate of food at the time and being able to eat without sharing" into words and said that Irish donations contributed greatly to Saarbrücken's recovery after the war.

The story of the Dankebuch and Tony's attempts to track down the students at the Saarbrücken school was the subject of an award-winning radio documentary in 2015.

Tony has traveled to Germany on numerous occasions since delving into the story of the Dankebuch and regularly speaks at German-Irish events.

He has helped unravel the mystery behind the book that once sat on Mary's shelf and helped bring old school friends together in the most endearing of ways.

A fitting tribute to his late wife.