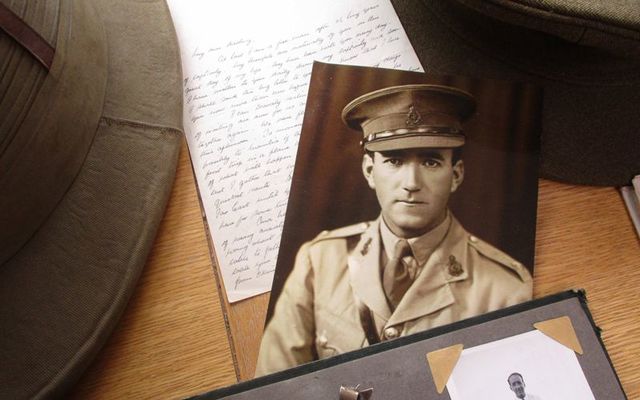 "Litir Ghrá ón Dara Cogadh Domhanda” will air on TG4 on October 12 and on www.tg4.ie. TG4

The TG4 documentary “Litir Ghrá ón Dara Cogadh Domhanda” tells the inspiring story of how a young Belfast doctor survived a Japanese POW camp during the Second World War and kept a promise to his sweetheart.

Frank Murray was a young doctor in the Royal Medical Corps stationed in Singapore, a British stronghold, during its fall to the Japanese Imperial Army in early 1942.

On February 15, after a week of fighting, over a hundred thousand troops led by British Lieutenant-General Arthur Percival surrendered to the enemy, in what would be the largest British surrender in history.

As Singapore blazed, Frank Murray hurriedly wrote a letter to his fiancée Eileen O’Kane, a geography teacher at the Loreto Girls Grammar School in Omagh, Co Tyrone. In the letter, he made Eileen an oath --- he would come back to her and one day they would walk down the aisle together as man and wife.

“This morning I burned all your letters and you know what a heartbreak that was to me — your letters with every single word … so precious to me. Where shall I be sent and what will happen to me I do not know, but I do know that I shall come back again to you. Nothing can ever stop me coming back to you. I love you now as never before.”

The Irish language documentary tells the remarkable story of how Dr Murray kept his promise to his beloved and how she in turn waited for him for 42 long months until Japan capitulated in August 1945.

By the end of the war, Dr Murray, an Irish Language enthusiast, a GAA man, and a devout Roman Catholic, was the Commanding Officer in a Prisoner of War camp in Northern Japan. It was to him that the local Japanese soldiers handed over their weapons and bowed their heads in surrender.

Dr Murray and his men had survived disease, starvation, torture, and slave labor. After the war, they made the long journey home from the Far East, leaving behind the bones of nearly a third of all the incarcerated Allied soldiers, sailors, and airmen captured by the Japanese.

Eileen prayed that Frank would safely make it home across the vast Pacific Ocean, the wide prairies of Canada, and the open Atlantic to make their rendezvous on the dockside at Larne in November 1945.

“I shall leave Omagh on the 1.30pm train on Saturday next ...I will go to Larne to meet you …I cannot believe that our long, weary, anxious waiting is at an end and soon we shall be together never to be parted”.

The film was made for TG4 and BBC Gaeilge by Strident Media with support from Northern Ireland Screen’s Irish Language Broadcast Fund.