Dubliner musician Ronnie Drew gives his guide to Dublin City in this television special from 1988 featuring "a bit of history, a few yarns and plenty of music." 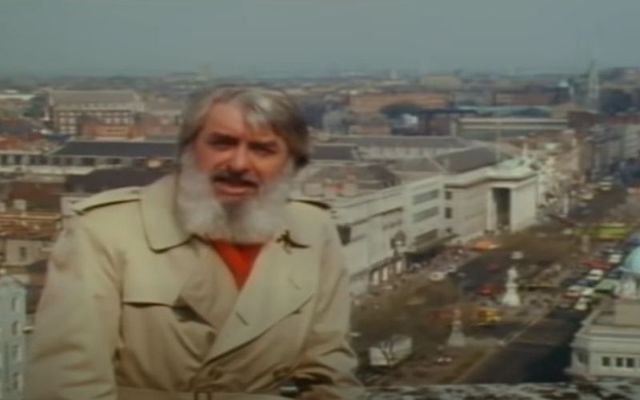 This fifty-minute documentary special titled "The Dubliners' Dublin" aired on Irish television's over thirty years ago and is a fascinating look at Ireland's past.

At the start of the clip, beloved singer Ronnie Drew sits on a ledge at the top of a building overlooking the streets of Dublin and welcomes the audience by saying:

"There's no way you would fit the whole story of Dublin into an hour, you could be walking around the place for weeks and still not have the full picture."

What he does promise is "a bit of history, a few yarns and plenty of music.. and of course the odd stop off for a pint or two."

Ronnie starts off his travels around Ireland's capital by visiting the Liffey, The Liberties, March's Library (one of the oldest library's in Europe), and St. Patrick's Cathedral.

Along the way, he shares nuggets of history and also plays a few tunes with his fellow bandmates.

He explained the band started off their music days by playing in O'Donoghue's pub in Dublin and Ronnie explains that "it was the late Luke Kelly, Lord have mercy on him, who said we should name ourselves after James Joyce's book of short stories- "Dubliners".

Ronnie finishes his guide to Dublin by saying, "a thousand years of breeding and brazenness has gone into the making of Dublin's people, the Dubliner's ways with words would run rings around you and their spirit is what keeps the city's body and soul together.

"So, Dublin lives on through good, bad, and indifferent times. It may well have its drawbacks but for charm, it's second to none."