As bullets rang out on April 24 1916 who would defend Trinity College? A handful of porters armed with pikes? Four young cadets wielding empty rifles? 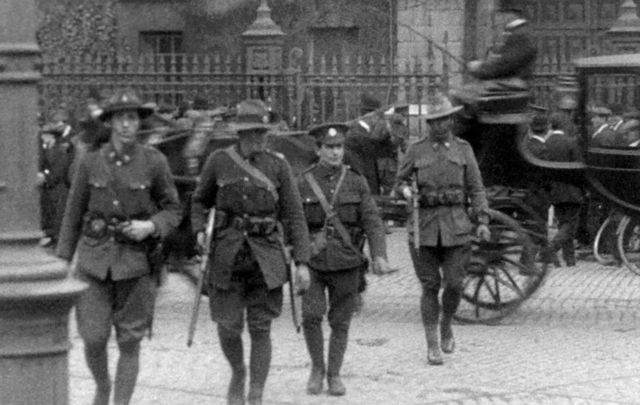 Rory Sweetman revisits the story of the Easter Rising and the threats posed to Trinity College during that fateful week.

During Easter Week 1916 Michael Taaffe, a medical student, was part of the small garrison that defended Trinity College from insurgent attack. Half a century later he wrote down his memories of those turbulent days.

"I had a nightmare vision of a last stand at the library windows, ammunition spent, while a horde of rebels with fixed bayonets swept in line across the Fellows’ Garden."

This extract from Defending Trinity College Dublin explores how close Taaffe’s nightmare came to being realized.

"What would have happened had Michael Mallin shouted ‘left wheel! CHARGE!’ once his Citizen Army column reached Trinity’s front gate at midday on Easter Monday? Or had members of Eamon de Valera’s 3rd Battalion rushed past the sole porter at the Lincoln Place Gate or dropped down silently from the Loop Line bridge behind the Officer Training Corps [OTC] headquarters, unseen and unheard by its corporal’s guard? Or simply entered Trinity’s grounds by climbing over the northern wall, as multitudes of students were wont to do when patronizing the Queen’s Theatre in Great Brunswick Street? Or taken advantage of the railings on the southern side of College, described by an acute observer as ‘by no means unscalable’?"

Who would have stopped them? A handful of porters armed with pikes? Four young cadets wielding empty rifles?

Once the shooting began on 24 April, the military and police fled Dublin’s streets for their respective barracks, the latter emerging occasionally to collar an unsuspecting looter.

Trinity was largely empty, its students all on vacation, so the first armed group to arrive in force would almost certainly have won the day, especially after taking control of the OTC armory. Even after the alarm was raised, the gates were secured and armed sentries posted, Trinity was still not safe from invasion.

Merely waving an academic gown at the porter was sufficient to secure admission to College on Tuesday, while those students who entreated Ernie O’Malley to help to defend the university from "those damn Sinn Feiners" on Monday afternoon did not know their man – before the week was out O’Malley would be sniping at the Crown forces. Either he or one of Walter Starkie’s "Sinn Fein friends" in college could have expedited a rebel incursion, providing the ‘kindly traitor’ whose possible existence so concerned Elsie Mahaffy,  the Provost’s elder daughter.

For that matter, the rebels needed only to capture John Joly, Trinity’s well-known professor of Geology, on one of his incautious spying expeditions to their strongholds to have secured a key to one of the several side gates to college. Had the rebels gained entrance to Trinity, its defenders had few illusions about the likely outcome.

According to Gerald Fitzgibbon, "they could have had [the College] for the asking up to two o’clock on Monday, and at very small cost up to two o’clock on Tuesday." Lieutenant James Glen, agreed that "it is very doubtful whether with the small number of defenders a really determined attack in the dark could have been successfully resisted."

Once secure in occupation, the rebels would have done just as Trinity’s defenders did: relocate the contents of the armory, fortify the front quadrangles, and prepare for a siege. As in the other rebel strongholds, this would have involved a considerable amount of damage: smashing windows, boring holes in internal walls, using books to construct barricades, throwing furniture downstairs to block access. However, this destruction would have paled in comparison to the likely effect of the British response. Chief Secretary Augustine Birrell had privately warned Prime Minister Asquith that artillery would be necessary in order to reduce Crown casualties when retaking the city. 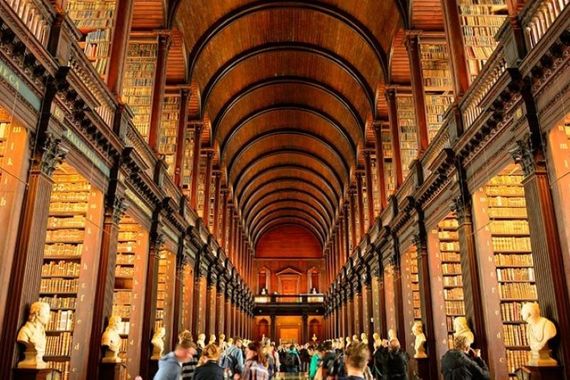 On his arrival in Dublin, General Maxwell made this threat public, declaring in his first proclamation as military governor that "if necessary, I shall not hesitate to destroy all buildings within any area occupied by rebels."

Trinity’s defenders applauded the use of artillery against rebel strongholds instead of the "expensive tactics" of a frontal assault by troops. They agreed that only intensive shelling would drive the rebels from their fortresses. Joly rejoiced as Liberty Hall "received its quietus," but would surely have changed his tune had the heavy guns been turned instead on his beloved university. He correctly foresaw that "once captured, nothing but the wholesale destruction of buildings, containing the most precious heirlooms of the ancient university, would suffice to dislodge the enemy." 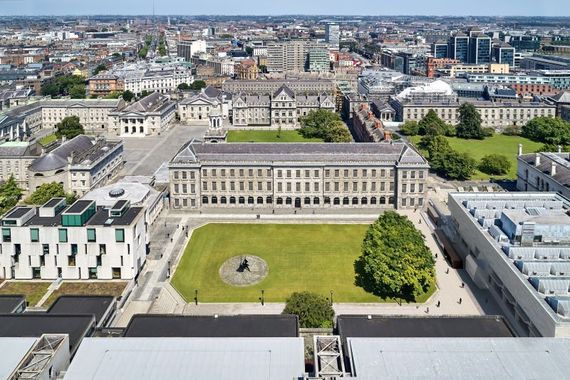 Trinity College Dublin from the air.

As Michael Taaffe’s nightmare scenario suggests, Trinity’s library was a symbol to generations of graduates. The destruction of "the College’s greatest asset" would have been a tragedy on the scale of the loss of the University of Louvain’s library, in August 1914. No-one would have intended this outcome, but war is no respecter of culture.

Trinity meant little to soldiers like Lowe and Maxwell, and as the historian Charles Townshend notes, "an alien kind of militarism was in the ascendant" during the Rising. Joly conceded that rebel occupation would have consigned Trinity to "the same fate which befell every public building into which the Sinn Feiners entered."

Fire would probably accomplish what shelling did not. By the end of Easter Week at least some of the university’s fine buildings would have resembled the shell-like remnants of the recently refurbished General Post Office. 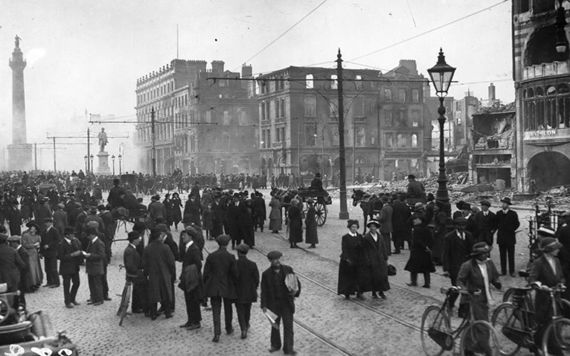 What of the wider strategic implications? Rebel occupation of Trinity would not only have deprived the Crown of a vital troop concentration center but also prevented the division of rebel forces planned by Brigadier-General Lowe. British troops would no longer be able to simply bypass and ignore rebel strongholds like Boland’s Bakery and Jacob’s Biscuit Factory. Attacks on these places would have driven the surviving rebels towards the center of the city, accentuating a natural centripetal tendency as the British cordon tightened.

For the beleaguered rebel outposts, Trinity would then have become a place of refuge; even the headquarters garrison at the GPO and Ned Daly’s 1st Battalion at the Four Courts might have made it across the Liffey, especially with the rebel snipers commanding Carlisle (later O’Connell) Bridge from the heights of Trinity. Given Maxwell’s refusal to accept anything less than unconditional surrender and the rebel leaders’ desire for as spectacular a "blood sacrifice" as possible, the stage was set for a fight to the death, possibly across the Fellows’ Garden as Taaffe had envisaged. There would be no civilians dying in tragic circumstances to dishearten Patrick Pearse, only a straight-out showdown between the armed forces of the Crown and what Thomas MacDonagh called the ‘zealous martyrs’ of the new Irish Republic.

Trinity would have become first a funeral pyre for the rebels, and then – rapidly – a shrine to their memory. There would be fewer insurgent leaders for General Maxwell to execute, but the shock of their grisly deaths would contribute to shifting public opinion in their favor. With the rebels’ ashes mixed in the rubble of the university’s once splendid buildings who would then be in a hurry to rebuild the College of the Holy and Undivided Trinty?

It took thirteen years to reconstruct the GPO, and over a decade to restore the Custom House; within six years of the Rising most of Ireland was under new management, a Free State created in the image of the dead rebel leaders. During the Rising a rumor spread in the suburbs that, should the rebels succeed in their audacious enterprise, Patrick Pearse was to be Trinity’s new Provost. Elsie Mahaffy scoffed at the idea, but Pearse ended Easter Week as Commandant-in-Chief of the Army of the Republic and President of the Provisional Government, and within a few years the railway station and main street on Trinity’s northern boundary would both bear his name (over the energetic protests of Trinity’s board).

Is it entirely fanciful to suggest that any new educational establishment erected on the former site of Trinity might have been called ‘Pearse College Dublin’?’