The local paper spoke about how the feeling among the people in rural Cork was one of doom, that they would all be eventually found dead, and so abandoning normal funeral practices as death rates skyrocketed. 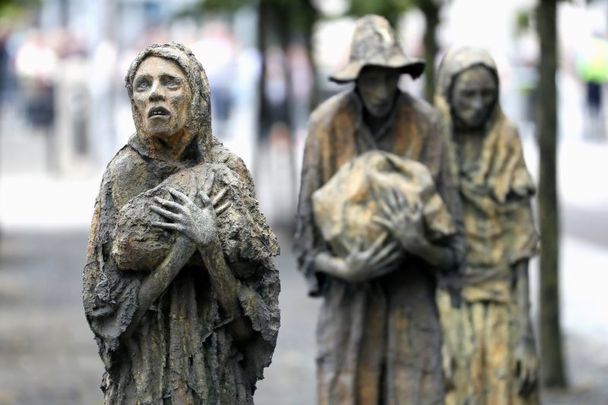 In one Cork workhouse, there was a death an hour during the height of the Irish Great Hunger.

While many of our ancestors were to climb aboard a ship in Cork to make their way to North America and escape the poverty and hunger of the Irish Great Hunger, many more were to remain in the county and become part of the one million Irish people who died of starvation and disease.

With fever and dysentery rampant, 5,300 paupers were crowded into the confines of Cork Union Workhouse by the first few months of 1847, which was over 1,000 more than recommended.

With such overcrowding in a space holding so many ill people, mortality rates increased at an alarming rate from week to week, jumping from 91 deaths in the last week of January 1847 to 127 the following week and shooting up to 164 in the second week of February. This astounding figure essentially describes a death in the workhouse taking place every hour of the week.

This was far from the end to the alarming mortality rates, however, with 757 deaths recorded in the workhouse in March 1847.

Writing for the Irish Examiner, Laurence Geary of UCC’s School of History looked at the worst effects of the Famine in Cork, the city, and its rural areas, and relates the visitors' accounts of the pain and suffering experienced by his people.

One particular point that visitors noted was the abandonment of funeral practices in Cork; the people’s familiarity with death and the sheer number of their family and friends falling to hunger and illness rendering it impossible to keep up the traditions of old.

“A terrible apathy, like that which oppresses a plague-driven people, seems to hang over the poor of Skibbereen ... One scanty funeral is fast followed by another and that by another,” wrote a correspondent of the Cork Examiner.

“The dead are enclosed in rude boards, having neither the appearance nor shape of a coffin and are committed to their silent resting place in the night time, when no eye can rest curiously on the rude contrivance, or observe the absence of friends and mourners, and the want of all that ceremony so grateful to the pride and consolatory to the feelings of the Irish peasant.”

Things were no better in Cork City where rural residents were fleeing in the hope of some aid, the city overcome with the sick and the dying as the government continued to fail them.

“I saw enough in five minutes to horrify me,” wrote Captain Robert Bennet Forbes who had arrived in Cork Harbour from Boston in 1847, the worst year of the famine, carrying aboard the USS Jamestown 800 tonnes of relief provisions.

“Hovels crowded with the sick and dying, without floors, without furniture, and with patches of dirty straw covered with still dirtier shreds and patches of humanity; some called for water to Father Mathew, and others for a dying blessing.”

In total, 24 percent of County Cork’s population was lost between 1841 and 1851 to emigration and death, although the city’s population increased by some 5,000 people because of the large number seeking refuge from the worst-hit areas in the countryside.

Despite the county feeling a limited hit in 1845, the first year that the potato crop failed due to blight, by the spring/summer of 1846, panic was beginning to set in as the complete crop was destroyed once again. According to Geary, the distress felt at this time was possibly the worst felt throughout the famine, as the government’s reaction continued to be “grossly inadequate.”

Kindred Spirits by Alex Pentek ....This sculpture was erected last year in Midleton,Co. Cork and is dedicated to the Choctaw nation whose ancestors provided relief to Ireland in 1847 during the Famine. pic.twitter.com/rvJRhNDrBq

“The winter and spring of 1846-47 witnessed the utmost distress in Cork and elsewhere in Ireland. This was a period of extreme and debilitating food shortages, spiraling food prices, food stealing and food riots, and a grossly inadequate public works relief programme,” he writes.

“The resident population of Cork City was augmented by starving people from the county and further afield who swarmed into the city in search of assistance, ‘walking masses of filth, vermin and sickness,’ as the Cork Constitution described them on April 24, 1847.”

Did your ancestors live through the famine in Cork? Tell us their story in the comments section, below.