19th-century letters and a recipe book describe luxury amongst Cork's wealthy as deprivation riddled Ireland during the Great Hunger. 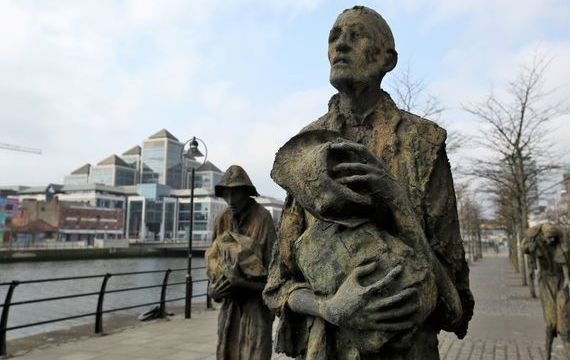 From famine to the Catholic church. "We slept-walked from one disaster into another impending one." Rolling News

An unpublished 19th-century recipe book and the letters of George Boole, University College Cork’s (UCC) first Professor of Maths, show that Ireland’s food and dining customs at end of the Famine were far more complex than the stereotype of potatoes and little else, according to Regina Sexton, food and culinary historian at UCC.

Ireland was a land of feast and famine as revealed in Boole’s letters home to his family in which he describes dining on turtle soup and champagne while being aware of the deprivation all around.

In his first Irish letter home to his sister Maryann, in October 1849, Boole describes the air of utter destitution and abandonment over the whole country on his train journey from Dublin to Cork.

He wrote, “For miles and miles you see nothing but fields overgrown with weed” and he saw “scarcely a human being by the way or a herd of cattle in the fields. I have seen nothing like it…”

Boole was a regular dinner guest in the home of Cork city’s notables, including the Bishop of Cork and Major Ludlow Beamish. He was a man of strong social conscience and describes being a guest at a dinner that began with “turtle soup and champagne.” This troubled him.

He writes, “considering the disastrous state of the country a more humble style of entertainment would be more suitable and in better taste.”

In one of his early letters, he noted that the provisions in the city were plentiful and cheap, in particular, salmon and fowl. In the same letter, he described the profusion of dishes supplied to his table and the mix of meat and fowl in the one course.

“Mrs. O’Brien, our landlady supplies our table most abundantly. Mother would be surprised at some of our customs turkey with beef, roast goose with roasted bacon, cheese invariably accompanied with butter and excellent apple tarts.”

Boole’s references to dining are numerous. He liked, for example, to meet with students over breakfast and to invite his colleagues to dinner. In a letter dated November 1849, he wrote to entertaining university colleagues and receiving a gift of three snipe.

“They contribute to our understanding of the city’s food and dining customs and the nature of Irish hospitality from a newcomer’s perspective. Boole’s observations support the view that the food culture of mid-nineteenth-century Victorian Cork was far more complex than is generally realized,” she said.

Boole’s active social life outside the university pained him somewhat as it interfered with his work and he wrote home in March 1850 saying he had resolved to limit his entertainments to the tea rather than the dinner table. A wise decision on his part as he may never otherwise have written his seminal work “The Laws of Thought” whose algebra and symbolic logic pioneered a new mathematics, which is the foundation stone of the information age.

Boole’s experience of Cork’s lavish food culture is also borne out by an unpublished 19th-century handwritten recipe book held in University College Cork. The recipe book belonged to a Kinsale landowner, Mary Honner, and it illustrates the elaborate dishes that George Boole would most likely have encountered at the dinner tables of Cork’s elite.

The reasonably priced salmon and fowl are well represented in recipes for pickled salmon, salted salmon and in the popular dish of duck and peas and fowl “in the French style.” Mary Honner’s recipe book contains over 170 recipes most of which are culinary recipes. Sweet and savory puddings of both a baked and boiled variety are the most numerous recipes, followed by recipes for preserved fruits, meat, fish, and oysters. The Honner family seem to have had a taste for spicy dishes and the collection contains recipes for curry dishes with meat, curried eggs and instructions for making “East India Curry Powder.”

“The recipe book is typical of the handwritten collections that started to appear in Ireland from the late 17th century,” comments Sexton.

“It contains the usual medley of culinary and medicinal recipes (such as snail tea or broth for consumption, colds and lung congestion) together with household tips, instruction for the care of animals and a few recipes of a cosmetic nature such as “tincture for the teeth” and “to prevent hair falling.

College or Cambridge pudding is just one of Mary Honner’s 30 recipes for sweet and savory puddings. Regina Sexton has adapted the recipe to suit modern tastes (using butter instead of suet) and renamed it in honor of George Boole. It is being served at formal university dinners throughout 2015 to mark the bicentenary of George Boole’s birth.

According to Sexton, the food situation during the Famine and afterward was very mixed in Cork. People starved while others had plenty.

As the potato crops failed, grain was exported, and as George Boole found, there was no shortage of food to be had if you had the money to buy it.

“Boole’s observations are a reminder of the complexities of the Great Famine and they throw up issues such as food security and food poverty, which are very relevant today,” says Sexton.

“In addition, his writings, together with the Mary Honner collection of recipes, encourage us to re-think our notions of the nature of Irish traditional food. These works lead us to question what is Irish traditional food, how was Ireland’s food culture developed and shaped and how much of it can be taken as being specifically Irish?”

Regina Sexton’s interest in the 19th-century food culture was sparked in part by the fact that she comes from generations of Cork bakers whose business was started under the reign of Queen Victoria.

“I grew up in a household where food and bread, in particular, was a part of our daily conversations,” says Sexton.

More than 150 years after the Famine UCC has a thriving Food and Nutritional Sciences faculty whose graduates lead the major global food industries based in Munster. The artisan food producers in Cork who have established the city as the food capital of Ireland have nearly all had training in UCC, taking full advantage or the rich agricultural hinterland. In addition, UCC is one of the only Irish universities to recognize the importance of food and culinary history and its application to Ireland’s food industry in developing a product with a tangible link to place and tradition and in promoting an authentic sense of Irish food identity.

Letter writer Boole not only documented the culinary landscape through his writings, he is also the forefather of the information age, although the potential importance of his life’s work was not appreciated until US engineer Claude Shannon came across his book 70 years after it was written. Boole's mathematical discoveries helped lead to the development of computers. This year as UCC celebrates Boole's bicentenary.

In 1849, George Boole was appointed the first Professor of Mathematics at Queen’s College, now University College Cork. His research became a prelude to modern mathematics, microelectronic engineering, and computer science.

Indeed, it is no exaggeration to say that Boole laid the foundations of the information age. Boole received a Gold Medal in Mathematics in 1844 from the Royal Society, the first to be awarded to a pure mathematician, and was elected Fellow of the Royal Society in 1857. He published many scientific papers and four books, the most famous of which is his magnum opus, "An Investigation of the Laws of Thought," written while he was a professor at UCC. It was published in 1854.

What came to be known as Boolean algebra was used by the engineer Claude Shannon in the 1930s to design electrical circuits which could be used to carry out sequences of logical instructions based on the binary values “on/true” or “off/ false”. These circuits evolved into modern computers and the instruction sequences became computer programs or algorithms. Thus, Boole’s work provides the mathematical and logical underpinning of computers, not only in their languages but in their very construction.