It's an uncomfortable truth, but it's time to recognize that Christopher Columbus was responsible for over 3 million deaths. 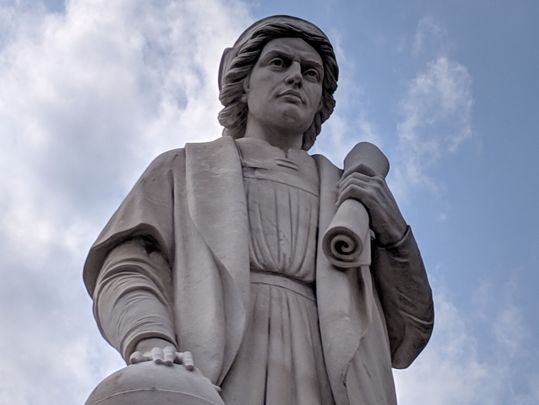 It's time to recognize other great Italians on Columbus Day and not a founding father of the slave trade responsible for over three million deaths.

Christopher Columbus is a polarizing historical figure whose life has been defined, for many, by his astonishing courage and intestinal fortitude.

Nevertheless, such impressive traits should never blur the fact that he oversaw a murderous quest for material riches that resulted in the utter demise of a people. Each year, as Columbus Day comes and goes, a question is raised – why are we celebrating his life?

Christopher Columbus was an immensely talented mariner who navigated the Santa Maria and two other smaller ships across the Atlantic Ocean in search of Asia. However, he and his crew inadvertently arrived in the New World on October 12, 1492.

Their long and arduous journey was driven by one clear objective – to find and establish a long-term source of wealth, preferably gold, for the King and Queen of Spain.

In return, Columbus would be allotted 10 percent of the profits, governorship over new-found land, and awarded the prestigious title of Admiral of the Ocean Sea. Upon arriving in the islands, which we now refer to as the Bahamas, Columbus and his crew first encountered the Arawaks.

It was at that fateful juncture in human history that he made two keen observations regarding these indigenous people.

Firstly, they were docile and trusting in nature; and, secondly, they wore gold jewelry. Columbus' own words from his personal journal capture the ominous fate that awaited the Arawaks:

"They do not bear arms, and do not know them, for I showed them a sword, they took it by the edge and cut themselves out of ignorance. They have no iron. Their spears are made of cane. They would make fine servants. With fifty men we could subjugate them all and make them do whatever we want." 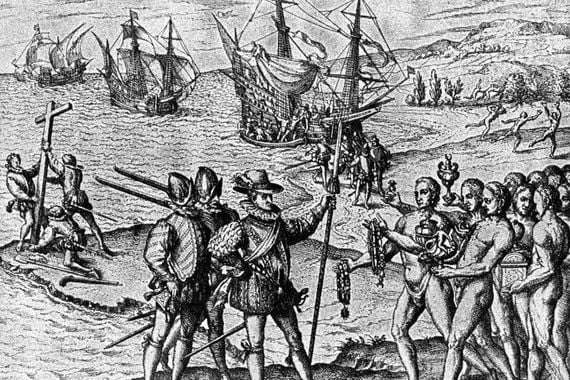 Christopher Columbus was an immensely talented mariner but he was also a murderous tyrant.

The concept of private property and the pursuit of material riches had reached a frenzied pitch in 15th-century Europe. As an independent contractor, Christopher Columbus recognized the seemingly limitless economic potential of the land he had “discovered.”

It was at this point in time that his bravery had begun to shift to sheer brutality. His transition is captured in many of the notes that he had sent to the King and Queen of Spain to bolster expectations. In one particular note, he promised: “as much gold as they need and as many slaves as they ask.”

Soon thereafter he and his men kidnapped a number of the Arawaks and forced them to identify other sources of gold throughout the region.

With an extensive arsenal of advanced weaponry/horses, Columbus and his men arrived on the islands that were later named Cuba and Hispaniola (present-day Dominican Republic / Haiti).

Upon arrival, the sheer magnitude of gold, which was readily available, set into motion a relentless wave of murder, rape, pillaging, and slavery that would forever alter the course of human history.

The death of 3 million people

The fact that such crimes could potentially go unnoticed by future generations was deeply troubling to him. He expanded upon the extent of Columbus’s reign of terror within his multi-volume book entitled the "History of the Indies":

"There were 60,000 people living on this island, including the Indians; so that from 1494 to 1508, over 3,000,000 people had perished from war, slavery, and the mines. Who in future generations will believe this? I myself writing it as a knowledgeable eyewitness can hardly believe it." 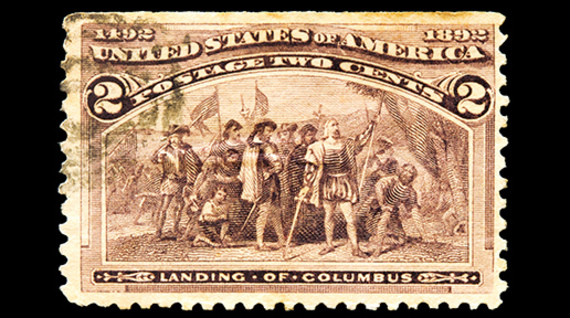 Landing of Columbus in the Americas postal stamp.

Such words offer the reader a firsthand account of the state-sponsored genocide that the Spanish Empire had financed through Columbus. Clearly, the intent of the Spanish Empire was to eradicate the islands of indigenous people through slavery and violence.

In doing so they had further established their already dominant political/economic standing within Europe. In a matter of years, Columbus and his men decimated the indigenous people of the Caribbean islands.

The intellectual dishonesty of celebrating Columbus

The fact that Columbus Day is celebrated each October is a testament to the intellectual dishonesty that has stemmed from the likes of academics, teachers, and politicians. It has become an annual ritual to sanitize history and present half-truths as absolutes.

In 1937, Columbus Day was officially established as a federal holiday in the United States; however, to this day it is not observed in Hawaii, Nevada, Oregon, and South Dakota.

The other 46 states that observe the holiday acknowledge Christopher Columbus as a superior mariner who had unknowingly found himself in the Caribbean Sea after departing from Europe. Incidentally, in conjunction with these facts, it would also be quite fair to label Columbus as one of the “founding fathers” of the trans-Atlantic slave trade. Unfortunately, such an unpleasant truth has been relegated to the background of history.

For decades now we have been hearing self-proclaimed “experts” espouse Columbus’s many accomplishments – particularly his “discovery” of the New World, yet, in doing so they have opted to minimize the extent of his violence or have utterly disregarded it.

The shame in all of this is that people living in countries throughout the Western Hemisphere, including the United States, have been indoctrinated into believing such fallacies and have been intentionally miseducated.

In sum, history cannot be rewritten. However, with information now at our fingertips, we can no longer fault our teachers, politicians, etc. for being left in the dark regarding our collective histories. Thoroughly researched academic materials are readily available for those who seek the truth.

In fact, it is fair to assume that as people gain a better understanding of Columbus they will begin to support other efforts to acknowledge this particular point in time.

Such forthright thinking is certainly evident in the cities of Denver and Minneapolis which have both taken the lead in distancing themselves from Columbus’s crimes and have acknowledged his victims with an “Indigenous People’s Day” on Columbus Day. Or, perhaps, we should consider an “Italian Heritage Day”?

One could certainly make a valid argument for the recognition of Galileo Galilei, Saint Francis of Assisi, Dante Alighieri, or Leonardo Da Vinci’s accomplishments. Be that as it may, most Americans take pride in our collective history and it is incumbent upon us to rectify past errors through education and enlighten our young people to the rich, yet, nuanced nature of American history.

Taking a moment to reflect on the man Columbus truly was is the first step to gaining a better understanding of how far we have come as a model nation.

He enjoys analyzing the complexities of today’s social and political issues through a religious/historical prism. His writing has been featured in TRUTH-OUT.org.