WATCH: A look at Dublin City as it prepared for Christmas more than 50 years ago

"Christmas in the City," now available on the Irish Film Institute, shows the great excitement of the holidays in 1963 Dublin. 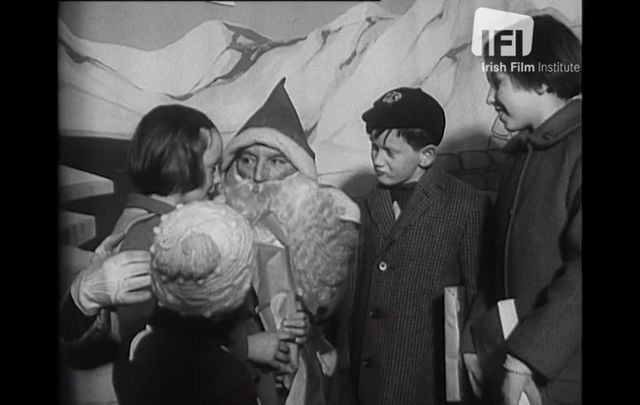 Children getting to meet Santa Claus in Dublin ahead of Christmas in 1963. Irish Film Institute

“Christmas in the City," now available to watch for free on the Irish Film Institute's IFIPlayer, shows us the magic of an Irish Christmas.

In December 1963, when Dublin was humming with excitement as crowds gathered in their droves to see the Christmas lights adorn the streets, Amharc Éireann (A View of Ireland) was on hand to capture the buzz.

In the Irish language short newsreel “Christmas in the City,” we see Henry Street overflowing with busy shoppers, enticed by the winter wonderland window displays and bargains at the market stalls on Moore Street.

Children eagerly wait to meet Santa in his grotto, while others test out the selection of toys on show.

There was magic in the city and spirits were high as the shops were thronged with shoppers looking for that perfect gift for their special someone.

About Gael Linn and Amharc Éireann

In 1955 Ernest Blythe, Chairman of Comdhail Naisiunta na Gaelige, lent Gael Linn £100 to produce a short film for cinema and the Amharc Éireann (A View of Ireland) newsreel was born.

From 1956 to mid-1957, Amharc Éireann consisted of short single-story items that were distributed to cinemas throughout the country on a monthly basis. Their popularity was immediate and by mid-1957 the Rank Film Distributors agreed to supply them to Irish cinemas along with their own newsreel, at which point they became issued on a fortnightly basis.

Produced by Colm O’Laoghaire, a total of 267 editions of Amharc Éireann were made. Although Gael Linn’s Amharc Éireann production ceased in late 1964, its influence is ongoing. The range of Irish interest subjects covered (from hard news stories to more magazine-like items) provide a vivid window into the development of modern Ireland at a particularly progressive point in its development and provide a first-hand insight into the moral, cultural, and economic development of the country throughout the Whittaker and Lemass eras.

You can learn more about the Gael Linn Collection from The Irish Film Institute here.