Campaigners are calling for the Hunterian Museum in London to release the stolen remains of 18th-century Irish “giant” and return the skeleton to Ireland for burial. 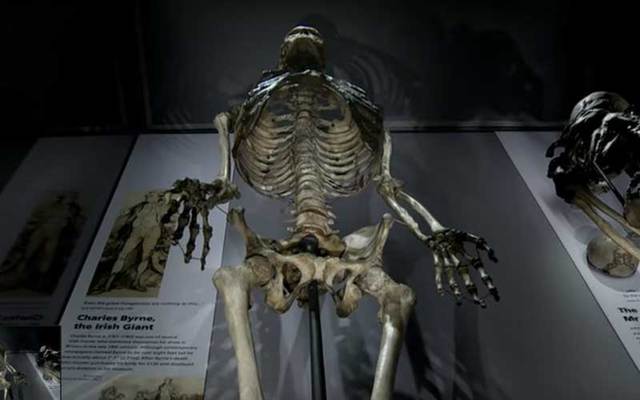 The towering skeleton of "Irish Giant" Charles Byrne at the Hunterian Museum at the Royal College of Surgeons in London. YouTube/Ronan McCloskey

Campaigners are calling for the Hunterian Museum in London to release the stolen remains of 18th-century Irish “giant” and return the skeleton to Ireland for burial.

Charles Byrne, known as “The Irish Giant,” was born in Co Derry in 1761. Suffering from acromegalic gigantism, a condition which caused him to grow to 7ft 7 in (2.31 m) tall, Byrne set off from Britain in his late teens and became somewhat of a celebrity as a freak show curiosity.

Read More: Calls for ‘Irish Giant’ Charles Bryne to be laid to rest after 200 years in British museum

His health began to decline in his early 20's. During this time, he was also pickpocketed of his life savings while drinking in his local pub. In 1783, he died tragically at the age of 22 after contracting TB.

While dying, Byrne, who was worried his body would be stolen for dissection and display, made arrangements with his friends to weight down his coffin and bury him at sea.

The sea burial occurred at Margate on the south coast of England, but surgeon anatomist John Hunter, had already bribed an undertaker to have Byrne’s corpse switched en route. Hunter boiled his body down to a skeleton and four years later, put Byrne’s skeleton on display in his Hunterian Museum, where it still resides to this day.

Over the years, experts have called for the skeleton to be buried at sea, as Byrne wanted.

In 2011, Professor of medical ethics at Queen Mary University in London, Len Doyal and Thomas Muinzer, a lawyer at Queen's University Belfast, called for Byrne’s body to be released and buried in the English Channel as he had requested before his death.

As the Hunterian Museum at the Royal College of Surgeons in London undergoes refurbishment (it will reopen in 2021), campaigners’ calls for the release of Byrne’s remains for burial in Ireland have been urgently renewed. However, the museum’s trustees continue to refuse the request, claiming the skeleton has important education and research value, TheConversation.com reports.

Genetic research has found that Byrne had a specific gene mutation and shares genetic ancestry with individuals living with acromegalic gigantism in present-day Northern Ireland.

Campaigners have argued that DNA samples have already been taken from Byrne’s skeleton that can continue to aid research, so his remains should finally be laid to rest.