Stephen Fry was lucky! The original punishment for blasphemy in Ireland was to be burned at the stake. 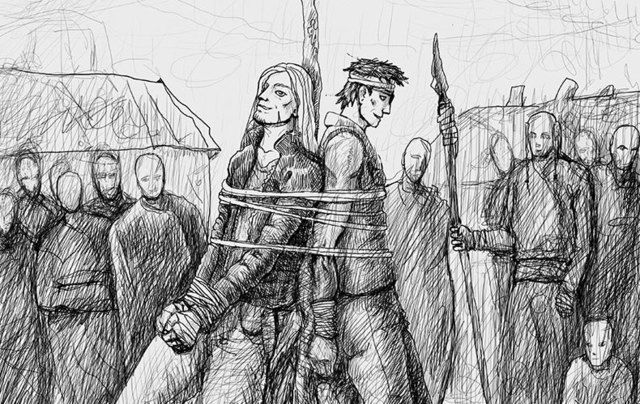 Two men tied up to be burned at the stake. iStock

The first known case of a conviction for blasphemy in Ireland was in 1328, when a man named Adam Duff O'Toole branded Christian scripture as a fable and denied the resurrection of Jesus Christ. For this he was burned at the stake. He is one of the very few Irish people to have suffered that fate.

Dated 1328, O'Toole's case is referred to in "A Compendium of Irish Biography," which refers back to chronicles compiled by Ralph Holinshed in 1807-'08. The case reference reads: "A gentleman of the familie of the O'Toolies in Leinster, named Adam Duffe, possessed by some wicked spirit of error, denied obstinatelie the incarnation of our Sauior, the trinitie of persons in the vnitie of the Godhead, and the resurrection of the flesh; as for the holie Scripture, he said it was but a fable: the Virgin Marie he affirmed to be a woman of dissolute life, and the apostolike see erroneous. For such assertions he was burnt in Hogging [College] greene, beside Dublin."

(In a strange coincidence, the latest subject of a blasphemy inquiry in Ireland is an Englishman with an appropriate name, Stephen Fry.)

Adam Duff O'Toole was a prominent member of the O'Toole family which launched Gaelic raids on the Pale, and his execution was as much to quash a Gaelic rebellion as it was to do with his religious views.

Blasphemy in Ireland, especially against the tenets of the Protestant bible, was big after the reformation.

Six bills to suppress "blasphemy and profaneness" were introduced in Ireland in rapid succession.

Read more: Ireland has disgraced itself with its farcical blasphemy law

Thomas Emlyn, a Unitarian minister, was fined £1,000 and imprisoned for one year for denying the Divinity of Christ and challenging the scriptures. He remained in debtor's prison after his initial sentence until the fine was reduced to £70.

In 1713, Peter Browne, Catholic bishop of Cork and Ross preached that loyal toasts to "the glorious, pious, and immortal memory" of King William were blasphemous.

In 1756, Robert Clayton, Bishop of Clogher, questioned the Nicene Creed in a tract on religious tolerance. He was condemned by other bishops but died before any prosecution for blasphemy was brought.

In 1852, Father John Synge Bridgman, a Franciscan friar, was convicted in County Mayo after burning an authorized King James Bible. He viewed it as a Protestant work inferior to the Catholic Bible. While the indictment described his actions as "in contempt of the Protestant religion," Judge Thomas Langlois Lefroy advised the jury "it is not the version of the Scriptures which will warrant the commission of such an offence" but rather "a want of reverence to the Scriptures."

The last case occurred in 1855 at Kingstown, now Dun Laoghaire, where a Protestant Bible was burned on a bonfire of "irreligious" books organized by Vladimir Petcherine, a Redemptorist Catholic priest. He was acquitted of blasphemy after claiming he had not intended to burn any bibles.

Blasphemy was included in the Irish constitution of 1937. In 2009 the Irish government of the day passed the Defamation Act 2009, leading to the investigation of Stephen Fry’s 2015 comments on the all-punishing God and threatened prosecution. (The case now been dismissed.) No prosecution has ever been brought under the 2009 act.

Is there still a space for the blasphemy law in modern-day Ireland? Leave us your thoughts in the comments section, below.