Bridget O'Driscoll: First pedestrian killed in a car accident in 1896

IrishCentral contributor CJ Clancy takes a look at the story of Bridget O'Driscoll, who was killed in 1896 when she was struck by a car in Crystal Palace, London. 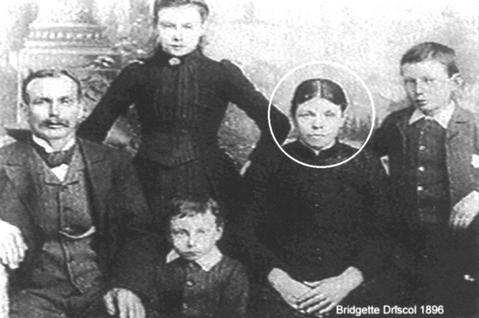 Bridget O'Driscoll (circled) was the world's first pedestrian victim of the motor car.

Born Bridget Swift in Ireland in 1852. By August 1896, forty-four-year-old Bridget was married to a laborer with three children in Surrey, England.

Bridget had arranged for a three-day trip to attend the Catholic League of the Cross festival in London.

On the 17th of August 1896, Bridget accompanied by her close friend Emma Murphy and teenage daughter May, were sauntering along Dolphin Terrace in the grounds of Crystal Palace, umbrella in hand, without a care in the world.

As they were crossing the road, they suddenly pivoted towards a loud monstrosity veering from one side of the road to the other at breakneck speed. Like a deer caught in the headlights, the three women were frozen and dumbfounded, not knowing to go forward, backward, or remain.

Before they knew it, the monstrosity veered straight into O'Driscoll. All May and Emma could do was look on helplessly as life quickly drained from Bridget with the car on top of her.

Henry Ford unveiled the first-ever gasoline-powered automobile in June 1896. At the time of O'Driscoll's accident, there was no more than roughly eighteen or nineteen automobiles in the entire country.

O'Driscoll was struck by a automobile owned by the Anglo-French Motor Carriage Company. They were carrying out a public demonstration when James Arthur Edsall plowed straight into her.

A case was brought against the driver. Edsall maintained he was only traveling 4 mph. Witnesses testified that the automobile was traveling as fast as a horse can gallop. That there was also ample room on the road to avoid O'Driscoll.

The courts came down in favour of the driver. The incident was ultimately perceived as a horrible accident. The coroner, Percy Morrison (Croydon division of Surrey) stated, "I hope it's the last accident involving an automobile".

According to WHO, "1.3 million people are killed globally each year as a result of road traffic accidents. It's ranked as the sixth cause of premature death and as the eight cause of death in all ages."

Bridget O'Driscoll was buried in Queens Road Cemetery. The first pedestrian killed by a car.

The very first automobile accident occurred in Birr, on the 31st of August, 1869. Mary Ward (nee King) from Ferbane, Co Offaly, was traveling in a steam-powered car along with her husband, when she thrown from the automobile and fell under its wheels dying instantly, suffering a broken neck.