Tom “The Moor” Molineaux won his freedom, traveling to England and boxing his way around Ireland but died penniless. 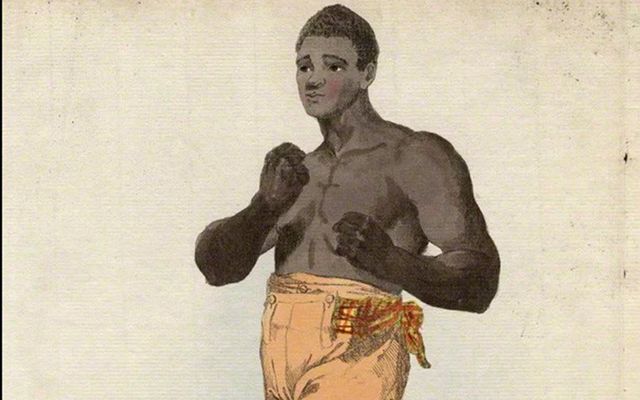 Tom “The Moor” Molineaux, the former Virginia slave who ended his life as a boxer in Galway.

Born into slavery in 1785, Tom “The Moor” Molineaux was trained by his father into a legendary fighter. At first, he only fought other slaves to amuse plantation owners, but eventually he went professional and was freed after winning a large sum of money for his owner.

Flushed with the rush of freedom, he boarded a ship to London, where he hoped to earn a living fighting professionally.

Read more: When the Moors invaded West Cork and carried off Irish slaves

When he arrived there he quickly established something of a reputation for himself – taking on Tom Cribb, then the most famous bare-knuckle fighter in England, in what was described by spectators as a particularly brutal match.

“Cribb was considered a legend in England,” filmmaker Des Kilbane told The Times of London.

“The crowd decided that no way their champion was going to lose. In the 19th round, Molineaux had Cribb in a headlock, which was allowed in the rules. The crowd stormed the ring and broke Molineaux’s fingers.”

A rematch attracted a crowd of 20,000, but Molineaux’s hopes for victory were dashed after Cribb knocked him out in the 11th round. Not only did he leave as the loser but it turned out his jaw had been broken too.

Afterwards he moved to Dublin and whilst he was able to earn money boxing at various events all around Ireland he also fell prey to that ancient Irish affliction: drink.

After a short spell in prison for not paying his debts, his struggle with alcohol made him increasingly ill and he died in 1818, aged only 34, in the care of three black soldiers in the 77th Regiment of the British Army that was based in Galway at the time.

With the 200th anniversary of his death approaching Galway City Museum is planning a number of events to commemorate the life and times of this extraordinary man.