One of Ireland’s oldest manuscripts, Book of Leinster, to be conserved by US bank

The 12th-century Irish manuscript the Book of Leinster is to be conserved, researched, and digitized for a global audience thanks to the Bank of America. 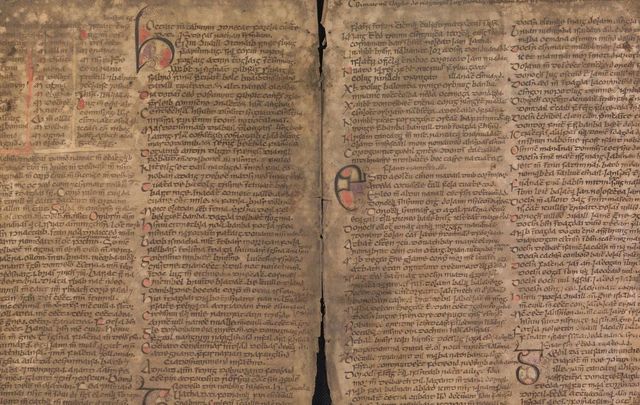 A spread from the Book of Leinster. Trinity College Dublin

The Library of Trinity College Dublin will receive funding from the Bank of America to conserve, research and digitize the Book of Leinster, a 12th-century parchment manuscript. It is one of the most important manuscripts written in Irish to have survived from the early medieval period and is of incalculable value to the history of Ireland and the Irish language.

The Book of Leinster is the earliest manuscript in the Library's collection. Written by the "prime historian of Leinster", Áed Úa Crimthainn, abbot of Terryglass, County Tipperary, it was formerly known as the Lebor na Nuachongbála or ‘Book of Nuachongbáil’, a monastic site known today as Oughaval in County Laois.

The manuscript is an anthology of prose, verse, genealogy, medical knowledge, and place-name lore. It contains the Irish ‘book of genesis’, Lebor Gabála Érenn, which establishes the place of Ireland, the Irish people and their language in a biblical world setting. A very important version of the saga An Táin Bó Cúailnge and the story of Cú Chulainn is also included in the collection.

Trinity's Keeper of Preservation and Conservation, Susie Bioletti said: “Bank of America’s support will enable the painstaking conservation of one of our most fragile and important 12th-century Irish manuscripts. Currently inaccessible due to risk of damage if handled. The treatment will stabilize the parchment, and repair extensive losses and tears allowing the manuscript to be resewn and rebound. This transformation will enable researchers to engage with the manuscript and catalyze research on the materials, decoration, text and meaning of a complex and fascinating record from the early Middle Ages.”

Damian McManus, Emeritus Professor of Early Irish at Trinity College Dublin, says that the "importance of the Irish manuscript collection in Trinity cannot be overstated. Irish has the oldest vernacular literature in western Europe and these manuscripts capture the earliest written evidence of the language. The variety of subject matter contained in these precious documents opens doors into many areas of research including … the identity of the Irish, the Vikings, the Anglo-Norman and the English settler in Ireland.

"Study of these manuscripts in the Irish language provides a unique Irish perspective on the Irish themselves, on their neighbors and on their own way of life and their position within world society. They cover every aspect of Irish life and are rather like newspapers today”.

Commenting on the significance of the award, Librarian & College Archivist, Helen Shenton said: “The Library of Trinity College Dublin’s collection of over 200 medieval and early modern manuscripts written in the Irish language is ranked as one of the most important collections in the world. Covering over a thousand years of Irish literature and learning, they shine a light on how Irish society operated, how our ancestors interacted with each other, what stories and myths they told about themselves and how they saw themselves on the world stage."

The award is being made through Bank of America’s 2022 global Art Conservation Project. Other prestigious international projects to receive funding include the restoration of Notre Dame, the Michelangelo drawing ‘Epifania cartoon’ at the British Museum and Edvard Munch’s ‘Vampire’ at the Munch Museum in Norway among others across the world.

Since 2010, Bank of America’s Art Conservation Project has supported the conservation of more than 6,000 individual pieces including paintings, sculptures, and archaeological and architectural pieces of critical importance to cultural heritage and the history of art. More than 200 projects across 39 countries have been managed by not-for-profit cultural institutions that receive grant funding to conserve historically or culturally significant works of art that are in danger of deterioration.

This is the second time that the Library of Trinity College Dublin has been awarded funding by Bank of America through its Art Conservation Project. In 2014 funding was awarded for its early medieval Irish manuscripts, the Codex Usserianus Primus, the Garland of Howth, the Book of Dimma, and the Book of Mulling dating from the 5th-9th centuries in a similar project that conserved, researched and digitized these precious manuscripts.

Fernando Vicario, CEO Bank of America Europe DAC and Country Executive for Ireland said: “We are honored to once again support the Library of Trinity College Dublin. This year’s partnership sees the conservation, research and digitization of the Book of Leinster, an invaluable medieval Irish manuscript. Previously, funding was awarded for four significant manuscripts, the Codex Usserianus Primus, the Garland of Howth, the Book of Dimma, and the Book of Mulling. Through our commitment to the arts and this continued partnership, we hope that millions of people around the world will be able to access and enjoy these cultural treasures.”

Virtual Trinity Library is a digitization initiative of the Library of Trinity College Dublin’s most valued collections. It will conserve, catalog, curate, digitize and research these unique collections of national importance, making them accessible to a global audience, from schoolchildren to scholars.