On Sunday, Aug 14, Mountbellew Heritage and Tourism have planned a public 'Famine Walk' in order to share the story of the victims of the deadliest year of the Irish Famine. 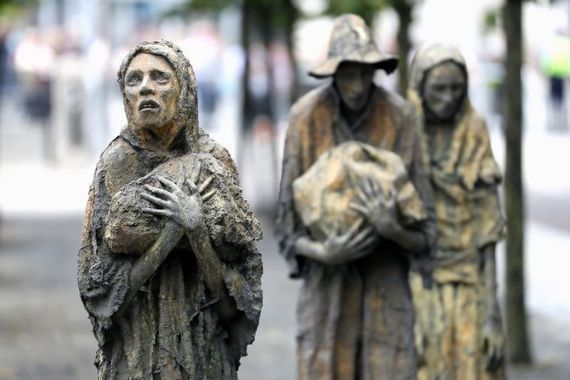 The Famine memorial in Dublin. Getty

Patrick Kilmartin recounted to his children, and they, to their children, the events of March 13 1846 when aged 14, he and his family, their neighbors and friends were evicted from their ancestral homes in Ballinlass, near Mountbellew.

It was the beginning of months and years of sorrowful events that led to the loss of thousands locally through death and emigration – a loss that still has not been repaired.

On Sunday, Aug 14, Mountbellew Heritage and Tourism have planned a public 'Famine Walk' in order to share the story of Patrick's family and many others as part of Heritage Week.

This year marks the 175th anniversary of Black 47 and this is one of a series of events organized by Mountbellew Heritage to mark this pivotal year in our history. Earlier in the year, the 'Emigrants and Exiles - the East Galway Story' Conference was held over zoom with speakers from 3 continents and for National Famine Commemoration Day, a Walk of Remembrance was held to remember the victims of An Gorta Mór.

Patrick’s family was one of many who took the road to Dublin and the road to Liverpool. Eventually, he would end up in Australia and be separated from his siblings who had emigrated to the United States. It was just this year, the 175th anniversary of Black 47, that two of Patrick’s descendants in Australia, Natalie and Robyn, made contact with his siblings’ descendants via DNA through the East Galway Genealogy & DNA FB group facebook.com/groups/eastgalwaygenealogy

Their family was not the only one of this Lost Generation to be split apart. The Kelly family in Mountbellew town saw their son Thomas leave for the United States and although he returned to Mountbellew in late 1867, it was as a fugitive from ‘British justice’.

He was the Fenian Leader whose letter in March 1867 proclaiming an Irish Republic had led to a price on his head. He was captured but then freed in Manchester before returning in a disguise lent by the Franciscan community to bid a last farewell to his widowed mother.

The death of a policeman in the audacious escape led to the infamous Manchester Martyrs deaths of Allen, Larkin, and O’Brien. Col Thomas Kelly was one of that generation whose talents and accomplishments were lost to their native place.

Ellen Hansberry, Mary Flanagan, and Mary Ann Taylor were girls sent to Australia from the local workhouse as part of a group of 30 in order to answer the labor shortage and woman shortage in the new British colony of Western Australia. Their voyage aboard the Palestine in 1852-53 is well documented as is the later voyage in July 1853 of the Primrose carrying 50 more young women to Canada.

All, bar a few who had siblings with them, were taken away from family, friends, and familiar places to populate distant places. Their descendants now take pride in these founding mothers’ resilience, endeavor, and courage.

These are some of the stories that will form part of Mountbellew Heritage and Tourism Network’s inaugural ‘Famine Walk’ which will take place on August 14th as part of National Heritage week. Held in conjunction with Mountbellew Town Development and with funding from Galway County Heritage the ‘Famine Walk’ will take in important sites in the local area associated with local events and people during those catastrophic times 175 years ago.

The wonderful Ballinlass Monument remembering the Kilmartins and the other 60 families evicted that bitter March morning will provide the start of the tour with a bus provided from the Square for those who wish to take part.

Following on from there the site of a mass burial in Aghiart Graveyard will be visited and respects paid. We will return to the Square where we will walk through the town visiting Col Kelly’s birthplace, the Franciscan Monastery where hundreds were kept alive through a soup kitchen, and the grave of Br Jerome, whose charitable work in taking care of the sick, dying and dead is remembered with gratitude by townspeople still before walking across to the Orphan Girls Park where the girls will be especially remembered.

There too the lumper potatoes, the variety grown preceding An Gorta Mór, will be seen as a ridge that was recently planted courtesy of Michael McKillop of the Glens of Antrim Potatoes. These lumpers are a reminder of the fate of many whose lives, because of the landlord system and British government policy, were so dependent on that ill-fated crop.

After that, we will visit the Workhouse, built in 1851-52 and where over the next few decades it served as a refuge for the poor and a hospital for locals. Now it serves as a wonderful educational center, Coláiste and Chreagáin, serving students from 12 to adult, and providing a variety of excellent courses. At the back of the Workhouse, the cemetery with its memorials to those who died there and in the wider area will be a fitting end to the Walk.

Afterward, there will be refreshments and a chance to chat and talk about how we can remember and reconnect with those of the Lost Generation and their descendants.

For those interested please contact mountbellewheritageandtourism@gmail.com as booking is essential for the bus provided for some of the stops.