When Graham and other leading Protestant church leaders tried to stop JFK becoming president because he was a Catholic. 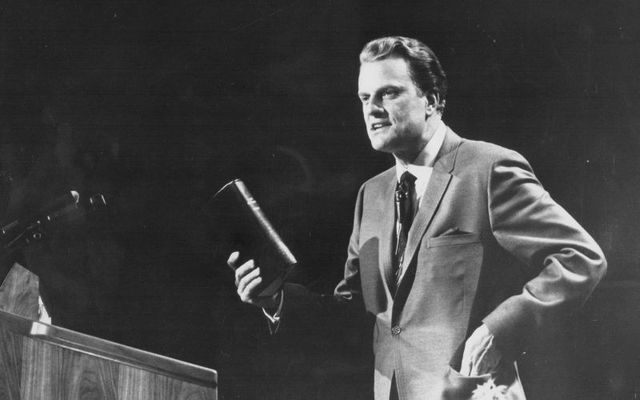 With the passing of Billy Graham in 2018, we recalled an extraordinary moment in American life when Graham and other leading Protestant church leaders tried to stop JFK from becoming president because he was a Catholic.

On August 18, 1960, with Kennedy showing unexpected strength, Graham convened a meeting in Montreux Switzerland, far from the media and prying eyes. Among the invited guests was Dr. Norman Vincent Peale, whose 1952 book "The Power of Positive Thinking" is still a bestseller today. Peale was also a notorious Catholic hater.

In all, about 25 Protestant leaders took part, with Graham leading the discussion.

Peale’s wife Ruth, revealed the subject of the secret meeting to block JFK, who would be the first Catholic president in quite specific terms in her letter to a friend found among Peale’s papers.

Ruth Stafford Peale wrote to a friend in Connecticut on August 19, 1960: "Norman had a conference yesterday at Montreux, Switzerland, with Billy Graham and about 25 church leaders from the United States. They were unanimous in feeling that the Protestants in America must be aroused in some way, or the solid block Catholic voting, plus money, will take this election."

That secret meeting was never divulged until 1992 when Peale’s biographer Professor Carol George discovered it among his papers.

As George discovered, “it was clear that the Montreux gathering set in motion plans for a one-day conference in Washington to rally concern about the possibility of a Roman Catholic in the White House. Before August was over, Dr. Peale agreed to preside.”

There is no doubt that Graham was the prime mover but he stayed in the background. At a news conference after the meeting, Dr. Peale said the participants had held a "philosophical" discussion of "the nature and character of the Roman Catholic Church" and he found it wanting.

That religious bias was too much even for the media at the time. They attacked Peale, forcing him to recant, and the entire affair rebounded on them with Kennedy's religion quickly fading as an issue because of the extremism of his opponents.

A week after the Washington meeting, Kennedy delivered a brilliant address to a group of Texas ministers in Houston.

"I believe in an America," he said, "where the separation of church and state is absolute, where no Catholic prelate would tell the President, should he be Catholic, how to act, and no Protestant minister would tell his parishioners how to vote during the 1960 campaign.”

He also pointed out separately that no one had held his religion against him when he fought for the US in the Second World War and was a decorated hero. It was game, set, and match and Kennedy marched on to the White House.

Graham seemed to genuinely regret his bias and in later life made common cause with several popes on matters of morality, though his mask slipped again during Watergate when he was recorded swearing about Jews in a discussion with his friend Richard Nixon.

According to an article in The New York Times on January 17, 1961, Graham said: “Mr. Kennedy's victory had proved there was not as much religious prejudice as many had feared, and probably had reduced forever the importance of the religious issue in American elections."

It was no thanks to Graham, however, that Americans truly adopted freedom of religion.