The so-called Battle of the Starlings took place in the skies above Cork City in October 1621. 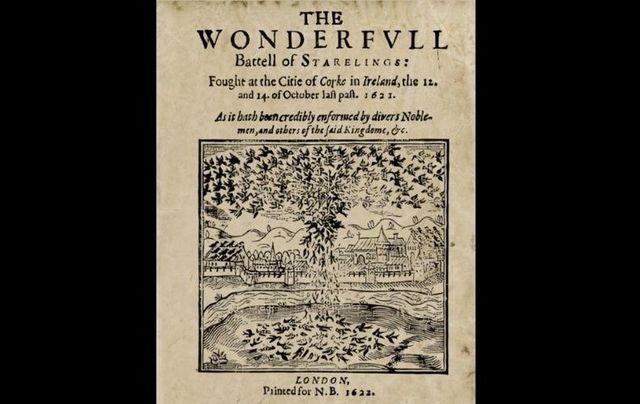 Battle of the Starlings pamphlet

400 years ago, a deadly aerial battle took place in the skies over Cork. The conflict was between two warring factions and it resulted in multitudes of dead and injured.

This battle took place over the weekend of October 12th - 13th in the year 1621 and it went down in local lore as "The Battle of the Starlings".

In the days leading up to the battle, hundreds of Starling birds mustered on either side of Cork city. One group camped at the eastern marshes while the other group gathered on the hills at the western outskirts of the city. Over days, more and more bird soldiers would arrive and join the assembled armies. Batches of a dozen or so would fly back and forth between the camps negotiating terms.

The negotiations broke down after a number of days and all hell broke out on the morning of October 12th, 1621.

The shrill noise they emitted drew the attention of locals who would otherwise have ignored the common sight of birds flying over the city. These were no ordinary birds, these were avian warriors going into aerial combat!

The opposing sides left their camps and advanced on the city just after 9 am. The bright sunlit sky turned dark with hundreds of squawking Starlings. City dwellers ran for cover as the two armies of Starlings entered into a ferocious battle.

Birds belted into each other in high velocity. Beaks stabbed into breasts and claws tore into wings. Dead and injured birds fell from the sky and landed on streets and rooftops. The sight was amazingly gruesome and then, it suddenly ended. What was left of the two armies regrouped and retreated back to their camps.

The following day saw the two factions re-organise at their respective camps. Backup came in the form of more Starlings and they advanced on the battle site in the sky above Cork city once more.

Other birds such as Crows, Kites, and Ravens took part in the second installment, and again, the sky turned dark and the citizens of Leeside ran for cover once more.

The battle raged on for the whole day and resulted in almost all of the birds being wiped out. The few surviving birds retreated and the Battle of the Starlings was over.

The sky which had turned dark with battling birds opened up to shine light on the streets of the city. Avian corpses were scattered across the streets and over rooftops. The River Lee looked like a carpet as it flowed with feathers. It was a biblical-like scene that sent many of the city citizens running for the nearest church.

The story of the bird battle in Cork spread across the country. It even reached across the sea where a pamphlet was published in London detailing the amazing scenes on Leeside called "The Wonderful Battle of Starlings Fought at the City of Corke."

Streets ballads were composed with lines such as "Their bodies fell like drops of rain." Engraved woodcuts of the battle were also popular among the public, especially for those who witnessed it and many a home in Cork city had a woodcut reminder of the event.

A ballad composed not long after the fire was convinced of the omen from the Battle of the Starlings:

"At Corke in Ireland, where with might and maine,

they fought together till scores of them were slaine,

their fight began and ended with such hate,

some strange event it did prognosticate."