Your ancestors were very likely undocumented immigrants, too. 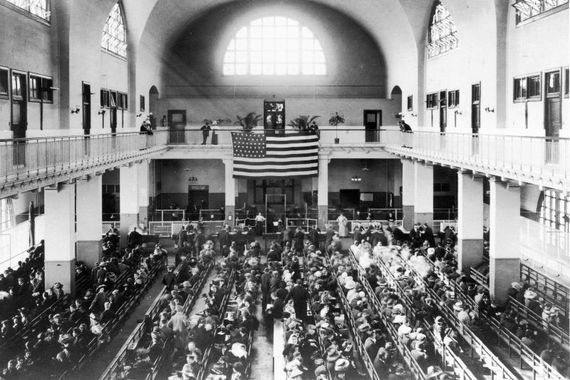 Immigrants at Ellis Island circa 1880. Getty

Your ancestors were very likely undocumented immigrants, too.

Why? Because their ancestors came to the US legally and, as is often claimed, "waited their turn," "didn't ask for any handouts." Take the following, for example:

It's a popular argument, but a quick look at the history of immigration history in the US reveals that it does not make any sense.

Did your ancestors arrive in the US before WWI? Then they were very likely undocumented too. When Annie Moore, the first immigrant to be processed through Ellis Island, arrived there from Ireland on January 1, 1892, she would not have been asked for a visa or a passport. Instead, ship's captains handed over the manifests and vouched for the names and origins of their passengers.

The Immigration Act of 1917 put in place further restrictions, barring those who were physically or mentally ill and imposing a literacy test - reading 30 - 40 words in your native language - on all those above the age of 16, in addition to barring immigration from much of Asia and the Pacific Islands.

The concept of being documented didn't arrive until the mid-1920s. Per National Geographic:

"the idea of a worldwide passport standard emerged in the aftermath of the First World War, championed by the League of Nations, a body tasked with the heavy burden of maintaining peace. A year later, perhaps recognizing a political opportunity, the U.S. passed the Emergency Quota Act of 1921 and later, the Immigration Act of 1924 limiting the inflow of immigrants. The emergency? Too many newcomers from countries deemed a threat to “the ideal of American hegemony.” How to identify an immigrant’s country of origin? By a newly minted passport, of course."

Moore, a hero to so many, is also a classic late-1800s example of chain migration. When she arrived from Co. Cork with her two younger brothers in tow, it was to reunite with her parents, siblings, and other family members who had already made the journey to the US.

As genealogist Megan Smolenyak, who discovered Annie Moore's real, tragic fate after decades of mistaken identity, points out, they had no trouble joining their parents.

Annie Moore, first immigrant to arrive at Ellis Island, with her little brothers, Anthony and Philip. She was 17, welcomed with much fanfare, and immediately reunited with the rest of her family.#KeepFamiliesTogether #WhereAreTheGirls pic.twitter.com/uJyt5KwARC

The first widely restrictive legislation came with the National Origins Act of 1924, which established visa requirements and regional quotas, with especially restrictive measures for those from Asian and Eastern European countries. However, many hopeful immigrants continued to enter the US illegally during this time, something the US eventually acknowledged and allowed for.

As noted in a Philadelphia Inquirer article on the same topic:

"Responding to the nation’s large number of undocumented immigrants, the federal government implemented the 1929 Registry Act, which allowed them to register as permanent residents for $20 if they could prove they had lived in the country since 1921 and were of “good moral character.” More than 115,000 registered from 1930 to 1940, at least 200,000 more after that."

In short, comparing what it meant to immigrate to the US back in the 1700s, 1800s, and early 1900s to the requirements for immigration today is comparing apples and oranges - or maybe even apples and a porcelain orange figurine from the Edwardian era.

If your family has been in America for generations, your original immigrant ancestor was essentially crossing an open border, had a more than 98% chance of being admitted to the US, and an easy enough pathway to becoming a naturalized citizen.

What was your ancestor's immigration story? Tell us in the comment section.