The chain mail, which is known as a hauberk, was stored in a garden shed in County Longford until the person who discovered it attended a Norman People event at a local tourist attraction. 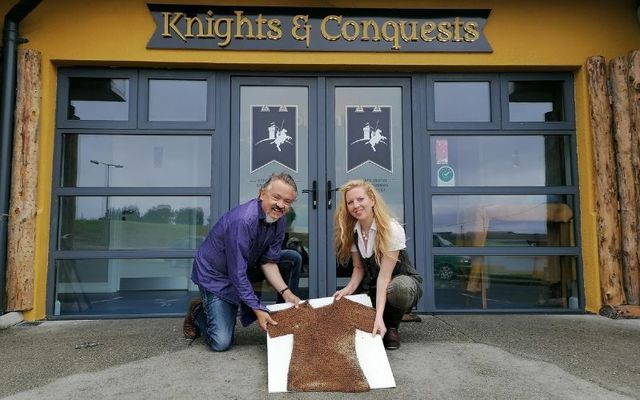 An 800-year-old vest of Norman chain mail has been discovered in County Longford after a member of the public revealed that they had stored it in their garden shed.

The chain mail, which is known as a hauberk, was discovered at an unknown location in the county and stored in a garden shed until the person who found it attended a Norman People event at local tourist attraction Granard Knights & Conquests as part of National Heritage Week.

The member of the public saw a replica of the chain mail at the event and told officials at the tourist attraction that they had discovered something similar.

The chain mail was presented to Granard Knights & Conquests General Manager Bartle D'Arcy, who has already been in touch with the National Museum of Ireland to declare it and begin the process of restoration.

D'Arcy said that he was wearing replica chain mail during National Heritage Week, prompting a member of the public to come forward.

"We had a Norman heritage day as part of Heritage Week. I was walking around wearing a chain mail coif when people came up to me and said that they had ‘some of that’ in their shed," he told the Journal.

"I said ‘what do you mean you have some of that in your shed?’ They brought it in to me two days ago and it is a full hauberk 800 years old."

The hauberk, which dates back to around 1172, is said to be in excellent condition and coincides with the Norman arrival in County Longford.

It also coincides with the era of Norman knight Richard de Tuite and the construction of Granard Motte in 1199. The motte and bailey is one of the best examples of Anglo-Norman fortification in Ireland.

The hauberk was dug up from a drain in an area close to Granard Motte and officials believe that it is related to the motte and bailey.

"We think it's related to the Motte because chain mail is expensive," D'Arcy told RTÉ.

The chain mail will now go to the National Museum of Ireland, D'Arcy confirmed.

Meanwhile, Déirdre Orme, the Tourism and Education Officer at Granard Knights & Conquests, described the hauberk as an "absolutely amazing discovery".

"We're completely blown away with it here in Knights & Conquests in Granard. And it completely links into what we're doing here at the center - tapping into our Norman history and heritage," Orme told RTÉ.

However, Aidan O'Sullivan, a Professor of Archaeology at UCD, raised questions over the chain mail's authenticity.

O'Sullivan said that the hauberk was most likely owned by a "modern re-enactor" and said that he doubted whether a genuine piece of iron chain mail could survive for 800 years.

"This is almost certainly not a genuine medieval chain mail. If original, and found 'in a drain', it would be a thin, rust-red colored deposit or ‘cake’ of iron oxide, if even it survived as that," O'Sullivan wrote on Twitter.

However, Orme told IrishCentral that the hauberk has been verified by archaeologists and has been observed by Matthew Seaver, the Assistant Keeper of Irish Antiquities at the National Museum of Ireland.

Orme said that Seaver would be working closely with Knights & Conquest over the coming weeks and added that the chain mail was discovered encased in peat soil at the bottom of a river, ensuring its preservation over the last 800 years.

D'Arcy also attributed the chain mail's pristine condition to its preservation in peat.

"It only rusts if you have water and air and if it's only in water it survives. When the digger brought it up it was in peat," he told the Journal.

The hauberk was stored in the person's shed for several years before it was brought forward, D'Arcy said.