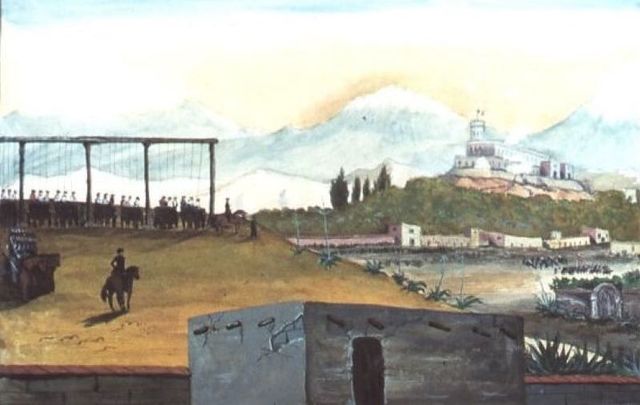 Hanging of the San Patricios following the Battle of Chapultepec. Painted in the 1840s by Sam Chamberlain. Public Domain

A battalion of around 265 Irish service members in the US Army once defected to the Mexican Army when the two countries went to war over Texas in the mid-19th century.

The noteworthy incident occurred shortly after the United States annexed Texas in 1845 when both America and Mexico stationed troops on the newly-created border ahead of the US-Mexican War 1846-48.

For this band of Irish immigrant soldiers, however, the conflict wasn't worth fighting for and they soon deserted their posts and joined forces with the Mexican Army south of the border.

It seems as though the 265 men were the targets of Mexican propaganda prior to their defection.

Many immigrant and minority soldiers in the US Army during the mid-1800s suffered severe abuse and discrimination and became disillusioned with their high-ranking officers. Catholics also suffered widespread discrimination in a broadly Protestant United States in the 19th century and the US Army was no different.

Others viewed the annexation of Texas as an unncessary expansionist war that America simply didn't need.

Realizing this, the Mexican Army attempted to bolster its ranks by persuading unhappy soldiers in the US Army to desert their posts and fight for Mexico.

They aimed propaganda messages at immigrant and Catholic troops stationed on the border between Mexico and the US. The messages urged the soldiers to cross the border and fight with a largely Catholic army instead and, all told, the campaign was hugely successful.

Around 5,000 soldiers, including the Irish defectors, deserted their posts in Texas during the conflict. They had been promised Mexican citizenship and huge parcels of land as a reward for switching sides.

The 265 Irish soldiers, who fought as the St. Patrick's Battalion in the US Army, became known as the San Patricios in Mexico. They were also known as the Red Company because of their red hair and ruddy faces and they carried a flag with a winged harp and a three-leaf clover.

The company's motto - "Irish till the end of time - was also written on the company flag and they fought in the Mexican rearguard in the Battle of Churubusco as it tried to prevent the US Army from advancing further into Mexico.

Unfortunately, it was not a happy ending for the cavalier Irish soldiers who deserted their posts.

Over 60 of them were captured as the battle drew to a close, and more than 50 of those prisoners were executed. The remaining prisoners were granted pardons, but only after they had received 50 lashes across their backs. Their faces were also branded with a large letter D to let everyone know of their desertion.

The Irish battalion members were the only deserters to suffer these extreme punishments.

The battalion is honored every year in festivals in Ireland and Mexico and the Irish founders are remembered fondly in both countries.

Mexicans have always viewed the group as heroes who helped Mexico in a time of great need, while Americans at the time regarded them as traitors.