On This Day: 1916 Easter Rising executions continue to the shock of many Irish people

Éamonn Ceannt, Con Colbert, Seán Heuston, and Michael Mallin were all executed on May 8, 1916. 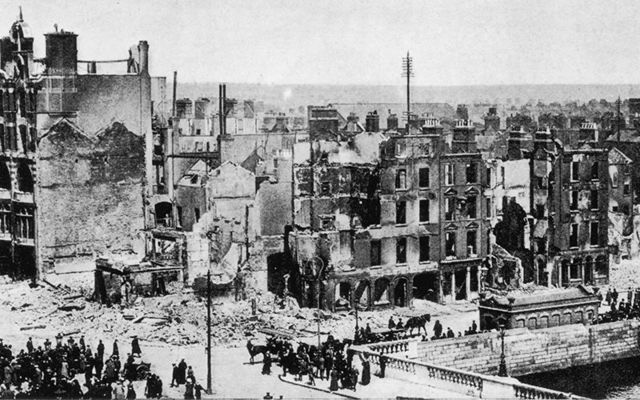 Corner of Sackville Street (O'Connell St) and Eden Quay: Day to day life continues after the bombing of Dublin during the Easter Rising 1916. Getty

Éamonn Ceannt, Con Colbert, Seán Heuston, and Michael Mallin were all executed in Dublin on May 8, 1916.

Obviously exhausted by the executions of last week, the British took the weekend off. Rested, they returned to their gruesome work on Monday, executing four more rebel leaders.

By this point, the Irish people were in shock. After the surrender they had hated the rebels and what they had done to their city. But now, the tide had turned. The rebels, once pariahs, had—thanks to General Maxwell—become heroes.

The Unionist journalist Warren B Wells, in a letter called “An Irish Apologia” stated: “I am not asking you to regard the executions of the rebel leaders, the sentences of penal servitude, the deportations, announced badly day after day without publication of the evidence which justified the infliction of the capital penalty, from behind the closed doors of Field Court-Martial, from the point of view of their justice, or even of their expediency. I am simply inviting you to endeavor to understand their effect on that Irish public which read of them ‘with something of the feeling of helpless rage with which one would watch a stream of blood seeping from under a closed door.’ ”

PLEA (of all three): Not Guilty