Is your Irish family name Quinn? You could be related to famous footballers, top businessmen, or Zorba the Greek. 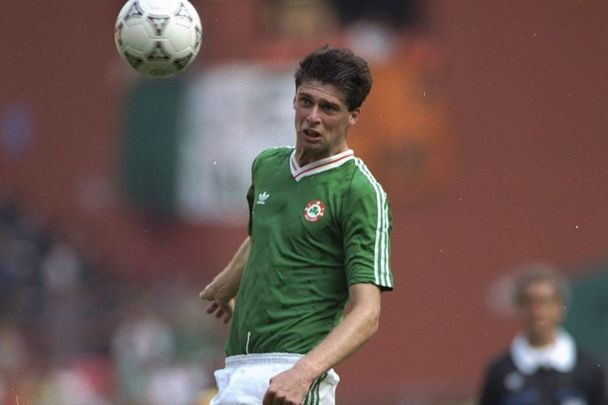 June 25, 1990: Niall Quinn of the Republic of Ireland in action during the World Cup match against Romania in Genoa, Italy. The match ended in a 0-0 draw but Ireland won 5-4 on penalties. Getty Images

This popular Irish surname Quinn is a derivative of a familiar old Irish first name, Conn (or Cuinn), meaning ‘counsel’ or ‘wisdom’ and sometimes ‘chief’.

Over the years, numerous spelling variations have developed, from Quin to O’Quin, Quine, and occasionally McQuinn or MacQuinn.

There were a number of families bearing the Quinn / Quin name throughout Irish history, denoted by two very distinct coats of arms - one gold and green which represents Quinns of Annaly, and one red and silver, arms of Quinns of Thomond.

The Ulster Quinns, or Quinns of Annaly, were most populous in county Tyrone (although originally from Longford - they were forced out by O Ferralls of Annaly), while the largest family was a Dalcassian sept of Thomond from County Clare. This was the family or clan of Niall O’Cuinn, who was killed in the Battle of Clontarf in 1014 and was the first in the family to use the surname.

In more recent times, Quinn has been a prominent surname in Irish businesses and households. Feargal Quinn was the founder of the Irish supermarket chain Superquinn and was elected to Senate in 1993 as an independent on the University College Dublin panel, primarily in recognition of his contribution to business and charities.

Niall Quinn is a famed Irish footballer, nicknamed The Mighty Quinn, who helped the international team reach the knock-out stages of the World Cup in 1990, while Cavan businessman Seán Quinn is the founder of Quinn Group of companies (health, insurance, hotels, glass, cement) and was once the richest man in Ireland with a fortune of €4.7 billion (US$6 billion).

Other famous Quinns of note include Academy Award-winning actor, late Anthony Quinn ("Lawrence of Arabia," "Zorba Greek") who although born in Mexico, was of Irish ancestry. Aidan Quinn, another noteworthy actor, was born in Chicago to Irish parents and starred in many Irish as well as Hollywood films throughout the 1990s in particular, including "Michael Collins" and "Song for a Raggy Boy."

*Originally published in 2013 on Ireland of the Welcomes. Last updated in September 2022.