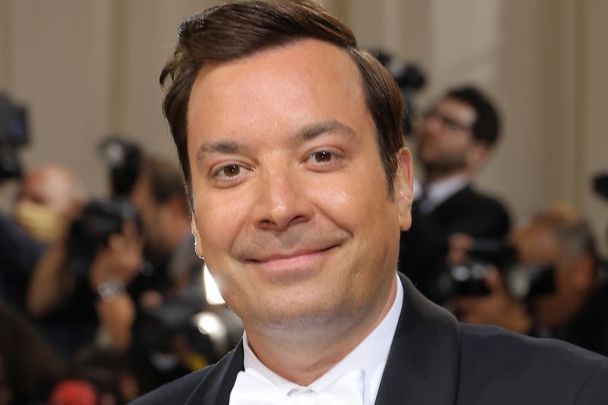 May 2, 2022: Jimmy Fallon attends The 2022 Met Gala Celebrating "In America: An Anthology of Fashion" at The Metropolitan Museum of Art in New York City. Getty Images

Jimmy Fallon already has an impressive history to look back on.

Between "Saturday Night Live" and hosting "Late Night with Jimmy Fallon," he's logged more than a decade on air, and he's settled nicely into his take over of "The Tonight Show." Not bad for a Brooklyn-born, Saugerties-raised kid who launched his career at the Bananas Comedy Club in Poughkeepsie.

Husband to Nancy Juvonen and proud daddy of Winnie Rose and Frances Cole,  third-generation James Fallon's entire family tree was firmly planted in Brooklyn until his parents moved their branch about a hundred miles to the north.

In the shadow of the Catskills, Jimmy and his sister Gloria enjoyed an all-American childhood complete with pets, visits with Santa, Catholic school, lots of snowman building, trips to Lake George, proms, and grandparents (who also made the out-of-the-city trek) essentially in their backyard.

Perhaps his name and the proximity of his grandparents help explain why Jimmy self-identifies as Irish. Fans are frequently treated to light-hearted references to his heritage, such as this remark that’s familiar territory for many: "I try to get tan, but I'm Irish so I burn bright red – lobster red. But then it becomes a nice cinnamon toast color."

But just how Irish is this affable guy next door who comes into our homes on a nightly basis? As a professional genealogist who's peered into the Irish past of everyone from Joe Biden to Beyoncé, I decided to take a closer look.

Jimmy, it turns out, is predominantly but not entirely Irish. To create a Jimmy Fallon, take five parts Irish and combine with two parts German and one part Norwegian. Make sure the five-eighths portion is loaded with Irish names like Daly, Devaney, Driscoll, Feeley, Graham, Kenny, Monahan, O'Brien, O'Neill, and Riordan, and add a gentle multicultural twist by sprinkling in a couple of Irish immigrant ancestors born in France and Spain. For good measure, start the distillation process in the counties of Cork, Galway, Leitrim, and Longford. Letting this concoction breathe for anywhere from 51 to 133 years after arrival in America yields one talented host and comedian that pairs well with a house band called The Roots.

Since even Jimmy's Irish roots are quite diverse, exploring a chunk at a time will make his ancestry easier to follow, and his only American-born great-grandparents, William and Mary Fallon, provide a logical place to dive in.  Departing the old country in sporadic bursts between 1841 and 1883, William and Mary’s parents and grandparents were the first of Jimmy’s ancestors to make their way to the United States.

Launching the immigrant parade were William Fallon's grandparents, Henry and Mary (née O'Brien) Stickevers, who alighted with an infant son on July 17, 1841. They initially settled in Jersey City adding a second son to the household before moving to Brooklyn later in the 1840s and having two more children.  Henry was naturalized in 1848 making him Jimmy’s first American ancestor.  Despite being born in France, his naturalization record shows him renouncing his allegiance to the "Queen of the United Kingdom of Great Britain and Ireland." Stickevers is an unusual name in Ireland, but indications are that they were probably from County Galway.