Interested in the history behind your Irish family name? Find out more about the O'Brien clan. 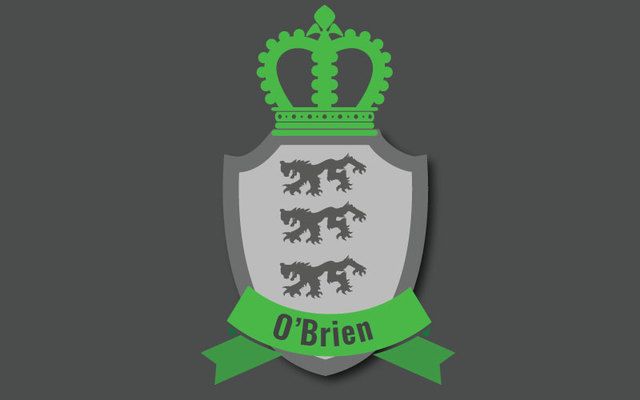 Here are some interesting facts about the Irish last name O'Brien, including its history, family crest, coat of arms, and famous clan members. Jay Sia / IrishCentral

Everything you need to know about the Irish surname O'Brien - its meaning, origins, interesting facts, and famous people with the last name O'Brien.

Read more: Are you Irish? These are the best ways to begin researching your Irish roots

Counties associated with the name O'Brien:

"The strong hand from above."

Ó Briain, a Dalcassian sept, derives its name and importance from the family of King Brian Boru. O'Brien is now a very popular name in all provinces of Ireland including Munster.

The family clans of the O’Brians have great importance in Ireland. This is mainly due to their illustrious predecessor, the great Brian Born, King of Leinster and Munster, who fought the Vikings at the Battle of Clontarf.

The surname O’Brian comes from the Irish name, as Gaeilge, O’Briain, which means "son of Brian". Brian is an ancient Celtic name of uncertain origin-but the most likely explanation is that it means "hill".

- Emerged as chiefs of the Dalcassian races from the south-west of Ireland.

Here's a short documentary on the Irish name, O'Brien:

Are you an O'Brien? Done some family research on your name? Let us know what you've found, or just say hello to your fellow O'Briens, in the comments section, below.